Special events: October 28, 1945, Celebration of the Centennial of the Births of Wm. and Sally Creech, Publication of “One Man’s Cravin”. The Creech Memorial Fund to be used eventually for a new hospital was established. By March the fund had reached $3,383.50.

Thanksgiving celebrations included service, a puppet show “The Spirit of the Hearth” by the freshmen, pictures of India taken by Faye Trail’s brother, and the Thanksgiving Ball, with peasant costumes instead of dress.

$344.29 was contributed during Christmas week and a special drive later on for European relief. Of this $100.00 was given to Harlan Charities, $25.00 was sent to the Friends Service Committee with the hope it will reach Mr. [Burton] Rogers to help him in his work in India, and $219.29 was sent to CARE.

Seniors assisted Mrs. Benjamin at the annual Dogwood Breakfast at Zande House for members of the staff, board members and visitors.

Special Easter music by the choir included “The Seven Last Words of Christ,” and the “Hallelujah Chorus” and “The Glory of the Lord” from the “Messiah.”

Buildings and Grounds: The Director was authorized to proceed with the planned, necessary work on West Wind and Draper Buildings, which would cost much more if delayed.

Farm: Being unable to purchase a tractor, the school bought a civilian Jeep to be used for plowing, discing, and as a pleasure car! The building of the farm workshop was decided to be out of the question until building materials were again available. Fencing costing up to $150.00 was approved. It was suggested that the land above Big Log be planted as a memorial to PMSS students who had served in the war. in May, 1946, a new tractor was purchased. During summer the dairy barn floors were cemented. New stanchions were installed, with individual drinking cups for each cow.

Publicity: Mr. Benjamin made winter trips to Chicago and Florida. Miss [Alice] Cobb made a winter trip to the New York and joined Mrs. Barry for a Philadelphia area trip.

Miss Cobb’s resignation from full-time work with PMSS was accepted with much regret, and appreciation for the quality of work she had done, in publications and…

…publicity meetings. She continued her work for 3 months, instead of a full-year commitment.

Trips: Group of dancers to the annual Folk Festival at Berea College April 12-13. 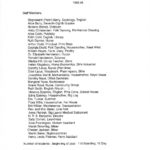 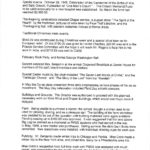 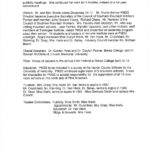