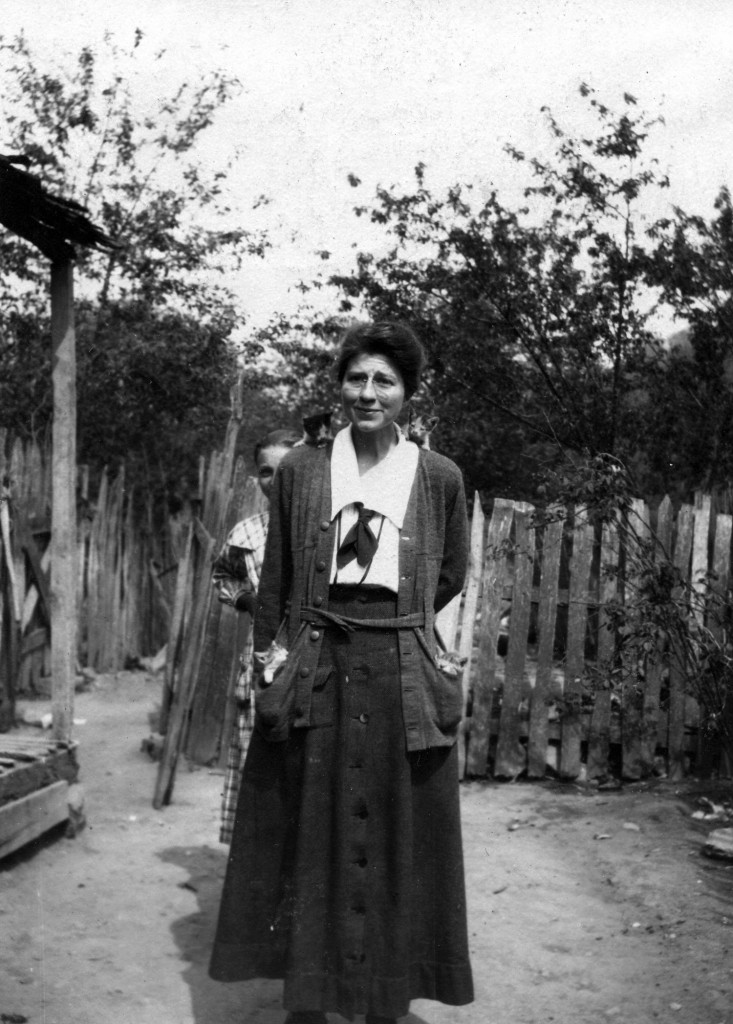 Dr. Grace Huse with kittens in her pockets and on her shoulders. big_laurel_3327.jpg

Pageants played an integral role in the education of Pine Mountain children and the pageants and the photographs that document many of the school events are evidence of teaching through images that was fundamental to Pine Mountain’s educational programs. The pageants are also testimony to an era which frequently engaged in ceremony to bring together community in order to instruct and to promote the arts.

Contained within the many photographs in the Pine Mountain Settlement School records are some of the most compelling visual stories regarding the school. Images of music and dance, folk craft, mountain vernacular architecture, costume, farm techniques and implements, scenery, neighbors, teachers, students, and classrooms document the life of the institution.

As the educational programs changed and grew and as the environmental programs evolved, so did the photographs. The photographic processes and aesthetics evolved and froze in time both culture, context, and events. The “what” that the photographer chose to photograph is often similar to the written documents of the time in which the creator lived.

Like the written word, photographs capture the essence of the cultural style of the age and the personal interests of the photographer. Just as the pen often captures those essences of person and place, the photographic image makes real the fleeting glance, the intensity of a stare, the discomfort of being photographed, the joy of discovery.

As workers came to Pine Mountain, they found themselves immersed in the experience of an often radically different culture. Through their lens, we can capture the photographer’s cultural shock, their empathy, and their struggle to place themselves within the context of rural Appalachia — or not.

Photographs are remarkable vehicles for primary source information. The visual content of the photographs, though often subtle, open the viewer to the vivid experience of other cultures, of other times, other lives, and other dreams and visions. But, these images should not be viewed as experiences of “other,” but as experiences of self. By standing behind the lens with the photographer and by reading the images, we can learn much about ourselves. If we look very closely we can even see those things that Mary Rogers said, “matter most,” when she reflected on the first fifty years of the institution’s history.

In the “Preface” of the Pine Mountain Album – 1913-1963, a publication prepared for the 50th anniversary of the School, Mary Rogers wrote:

Most of us are so busy trying to do what must be done today, and planning ahead to what needs to be done tomorrow that we have little time to look back to the things which happened yesterday. But we are celebrating an anniversary, the 50th anniversary of Pine Mountain Settlement School, and so we will turn to the past — get out the old album and look at the pictures.

It’s a funny thing, looking at old pictures. They don’t show the things that matter most: Uncle William’s craving that his people might grow better; Miss Pettit‘s dedication to bringing help to the mountains; Mrs. Zande‘s high standards and loving understanding of people; Mr. Morris‘ dynamic energy; the different gifts brought by hundreds of workers over the years.

Nor do they show the important things in a student’s life: the moments of courage; the hours of service; the growth in understanding; the vivid enjoyment of life; the deepening love for a place and its people; and sometimes the realization that the source of all things is the Love of God.

All the same, let’s look at the pictures, some faded and old-fashioned, but taken because someone wanted to “keep” something from the past, and let us try and read into them the things for which they stand.