The Medical Settlement Big Laurel Prospectus 1921-1940 is the earliest record of planning for this medical satellite settlement. Located at the mouth of Big Laurel and Greasy Creek, it was a short four-mile trip from the main Pine Mountain Settlement School campus. The Medical Settlement at Big Laurel and the Line Fork Settlement were the only medical and educational settlements realized of the seven that Katherine Pettit, the Pine Mountain Settlement School’s founder, recommended. Today, little remains of the site. The cabins have been removed and medical and educational services from the site suspended in the early 1950s. 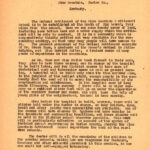 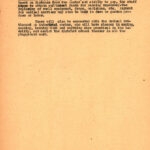 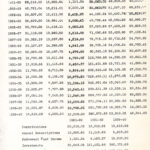 The medical Settlement of the Pine Mountain Settlement School is to be established at the Mouth of Big Laurel, four miles from the school. Here we own some twenty acres of land, including some bottomland and a water supply which the settlement will be able to control. It is in a community which is comparatively thickly settled and very available from the surrounding country so that many, many people will have access to it. The present personnel of the Medial Settlement consists of Dr. Grace Huse, a graduate of the Women’s Medical in Philadelphia, and Miss Harriet Butler, a trained nurse of many years of experience in the mountains.

As Dr. Huse and Miss Butler look forward to their work, they plan to have three nurses; one in charge of the hospital to be built later ad two district nurses to take care of obstetrical work and tubercular cases as well as general nursing. A hospital will be built only when the time arrives when, in the judgment of the medical staff, enough people in the community feel the need of it to carry the responsibility of its construction and maintenance. In the hospital care of long acute illnesses, minor surgery (there will be no major surgery as a rule) and clinic work will go on under the supervision of the resident doctor and nurse, who will have the help of young girls of the neighborhood trained in home nursing.

Even before the hospital is built, however, there will be clinics held under the doctor in charge, on baby welfare, eyes, teeth, and other points when specialists are available. One of the nurses will have classes in hygiene and home nursing in the immediate and surrounding localities, and those classes will be held in the district school wherever possible. This work will be particularly effective on account of the system of district school supervision in Harlan County, whereby the Pine Mountain Settlement School supervises the work of ten rural free schools.

The doctor will do all the examination of the children in the country schools, making her own diagnoses for Hookworm, trachoma, and other ailments prevalent in this section in our small but well-equipped laboratory.

The initial expense of establishing the Medical Settlement is to be borne by the Pine Mountain Settlement School. The community, however, have already given a generous donation of logs for the doctor’s house, which is being built this summer, and labor in constructing the house. Salary, living expenses

p. 2
expenses and maintenance of the horses will be provided by the Settlement School also. By a system of graduated fees, based on distance from the doctor and ability to pay, the staff hopes to obtain sufficient funds for running expenses/ –the replacing of small equipment, drugs, medicines, etc. Payment for medical services may also be made in farm and garden produce or labor.

There will also be connected with the Medical Settlement an industrial worker, who will have classes in sewing, cooking, laundry work, and anything else practical in the locality, and assist the district school teacher in all the playground work.

An abbreviated table of financials follows