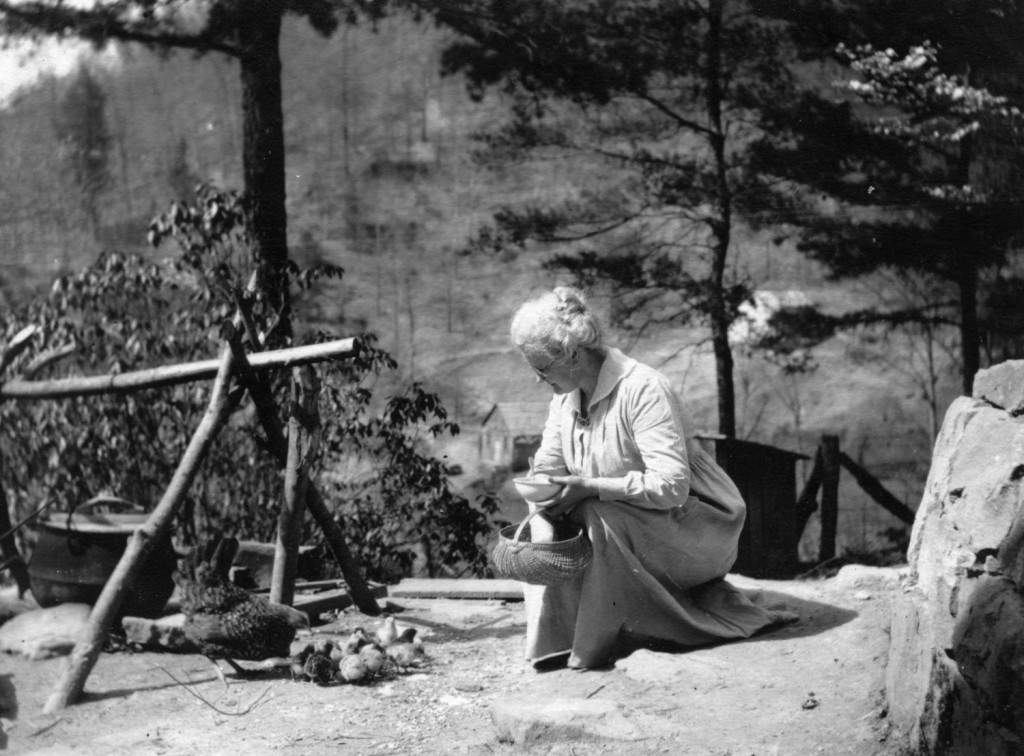 Harriet Butler was the first nurse hired by Katherine Pettit to accompany Dr. Grace Huse in the establishment of the medical settlements, PMSS’s satellite facilities for community medical and educational outreach.

Harriet Butler was an older woman when she started her work for the Pine Mountain medical extension centers. She had been hired in 1905 by May Stone and Katherine Pettit to work at the Women’s Christian Temperance Union School (WCTU), and later (1915) with the re-named school, Hindman Settlement School, near Hyden, Kentucky.

It was Butler who had developed the health outreach for Hindman and wrote the health education program as well as laid the foundation for the establishment of a small hospital that was part of the early Hindman campus. It is also likely that it was Butler who helped Dr. Joseph Stucky, a well-known Kentucky physician, to bring to national attention the epidemic of trachoma in the eastern Kentucky mountains as this became a life-long crusade for her and a focus for the epidemic in the Pine Mountain valley.

Miss Pettit was well aware of Butler’s energy and skills and knowledge of rural mountain community health needs. Her programs at Hindman had been exemplary in their medical intervention for a variety of health needs. The need, however, was not a diminishing one in the Hyden area not later in the Pine Mountain valley. In fact, the needs in Eastern Kentucky were far greater than either Pettit or Butler imagined and a second nurse had been quickly added to address the large demand from the Hyden community for home nursing and for health education. Butler had met the challenge at Hindman and eventually, Dr. John Wesley Duke, the first doctor in the county was hired. He served as the county medical officer and the first physician at the WCTU school.

Clearly Harriet Butler was an achiever. She had a pivotal role in the early history of Hindman Settlement School and in the medical history of eastern Kentucky. She was a strong supporter of the work of Katherine Pettit and when Pettit left Hindman to found Pine Mountain Settlement School, and she had reluctantly stayed behind. There is also evidence that Pettit struck a deal with Hindman’s Director, May Stone, when she departed for Pine Mountain, that she would not siphon away staff,wished to expand the reach of the Settlement School model beyond Hindman. There is also evidence of  Stone’s support of the new Harlan County initiatives in the release of  Ethel de Long to Pettit’s new Pine Mountain Settlement School. Ethel de Long had headed the educational programs at Hindman and thrived on innovation. That one recruitment was astute, as de Long became a pivotal figure in the development of the new settlement in the Pine Mountain valley. Harriet Butler took longer to follow Pettit and de Long, but was just as important in expanding the critical support for basic education, vocational training and medical services in the isolated regions of Eastern Kentucky.

Harriet Butler stayed behind at Hindman where she worked with Dr. Duke to make sure that a healthy community continued to be promoted through Hindman Settlement School’s community health work. The evidence of her outstanding work in the community was everywhere present and much to Harriet Butler’s credit she stayed the course at Hindman to give stability to the health programs in the region. However, there was one critical incident where her influence failed and that probably precipitated her departure for Pine Mountain.

Pettit had left Hindman at Christmas in 1912. In the fall of 1914 Hindman Settlement School had a massive outbreak of typhoid at the School. Butler and others had petitioned May Stone to address the poor sewage disposal at the School while Pettit was still present, but during the course of the next two years following Pettit’s departure, the improvements needed were postponed. In October, after a long dry spell the rains came and the accumulated sewage flooded the water systems. Typhoid fever soon followed and Harriet Butler soon left Hindman leaving the problem with the new Community Health Director and the School.[Stoddart, p. 70-81].

This incident was most likely the reason Harriet Butler left Hindman, as well as differences with May Stone regarding the administration of the institution’s health plan and Stone’s inattention to health concerns. Butler did not join Pettit immediately but wisely waited for Pettit to put into place plans for the satellite medical extensions. When the economics were solid and the new endowment raised by Angela Melville was in place, she came to join the new physician, Dr. Grace Huse, at the Medical Settlement at Big Laurel. 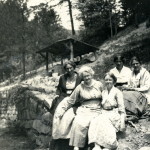 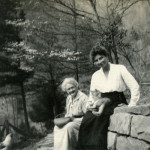 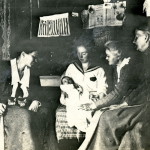 Harriet Butler joined Pettit and the new community health efforts, gaining strength at Pine Mountain as a nurse, but more critically as a planner. She was highly suitable for the new medical extension settlements. Likely it was her planning that laid the foundation for both the Big Laurel Medical Settlement and the Line Fork Settlement extension and with the advice of  Dr. Grace Huse, who carried the load of working directly in the community with patients. Much of the development work at Pine Mountain clearly mimics the early successes of Butler at Hindman.

With the strong support of Pettit and her new and enthusiastic supporters at Pine Mountain, Butler set about spreading the word and work she had started at Hindman. [See the account of the work of Butler and Huse as praised in the November 1921 issue of Notes from the Pine Mountain Settlement School.]

The May 1924 issue of Notes bids a fond goodbye to Miss Butler and Dr. Huse with these words:

Miss Harriet Butler and Dr. Grace Huse, the life of the Medical Settlement since its beginning five years ago, are leaving us on account of ill health. Their Big Laurel neighbors say, “Take any house-seat you want to build on, and just settle among us. Maybe we can get us another doctor, but where can we get friends like you?” To write of the happy changes that have come about through their friendliness and wisdom would fill a book, but “their works do follow them.”

The Community testimony clearly reflects what was at the heart of Harriet Butler’s magic touch — her sincere, informed, and warm relationships with place and people. 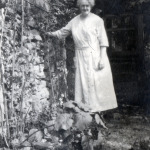 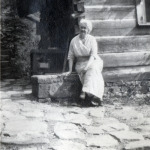 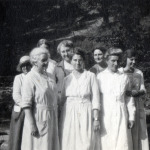 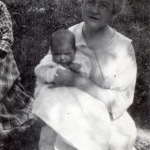