This PINE MOUNTAIN 1943 FAMILY ALBUM page provides images and transcriptions of a six-page booklet printed by the Pine Mountain Settlement School. The publication, titled “Pine Mountain 1943 Family Album,” contains 15 biographies and 17 photos of PMSS workers, students, board members, and community members who made memorable contributions to the spirit of the School at the time. As the Album explains: 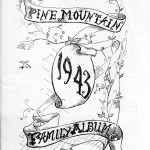 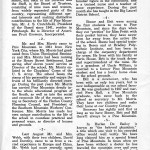 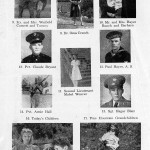 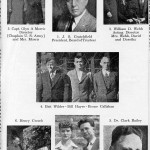 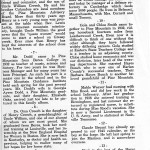 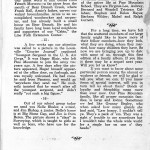 -1-
Back of the program of the school, and back of the Director and the Staff, is the Board of Trustees, consisting of nine men and women, from widely separated parts of the country, representing different special interests and making distinctive contributions to the life of Pine Mountain. Mr. J. S. Crutchfield, President of the Board since 1941, resides in Pittsburgh. He is Director of American Fruit Growers, Incorporated.

-2-
Mr. and Mrs. [Glyn] Morris came to Pine Mountain in 1931 from New York City, where Mr. Morris had graduated from Union Theological Seminary and Mrs. Morris had been nursing at the Henry Street Settlement. Last spring, after eleven years’ service as Director of the school, Mr. Morris enlisted in the Chaplains’ Corps of the U. S. Army. The school bears the stamp of his personality and enjoys the fruits of his brilliantly directed energy. During the past years Mr. Morris has carried Pine Mountain deeply into the whole educational program of the South, as well as into the social and economic life of the county, serving as Secretary of the Harlan County Planning Council, and President of the Southern Mountain Workers’ Conference. Mrs. Morris has made her own unique contribution to the life of the school in countless practical and personal ways, as director of houses and grounds.

-3-
Last August Mr. and Mrs. [William D.] Webb, with their two children, David and Dorothy, came to us from a varied experience in Europe and China. Mr. Webb had more recently spent several months in study at Hartford Theological Seminary preparatory to accepting an administrative assignment to Rhodesia, under the American Board of Foreign Missions. Here the war has turned to our advantage. Mr. Webb is fast acquainting himself with the life of the valley and the county, and Mrs. Webb has likewise become a familiar figure in the community. She is a trained nurse and a teacher of some experience. During the past month she has taught in the Big Laurel District School.

-4-
Boone [Callahan] and Brit [Wilder] were among the first students to come to Pine Mountain, and since the days when they cut “pretties’ for Miss Pettit with their pocket knives, they have never been far away from the active life of the school. Boone had special training in Berea and at Bradley Polytechnic Institute, and has been in charge of the carpentry department for years. He lives with his family at Farm House. Brit is the truck driver and superintendent of the mine. He is a grandson of Uncle William, is married to a former Pine Mountain student and has a lovely home close to the school grounds.

Bill [Hayes] is a newcomer, who has been with us only ten years, but is now indispensable as our school farmer. He was graduated in 1937 and married Fern Hall, a Pine Mountain graduate, who came back to the school as secretary to Mr. Morris. They have two children [Steven and Helen] and make their home at our Country Cottage.

Someone has rightly said that as long as we have Boone, Brit and Bill there’ll always be a Pine Mountain.

-5-
In Harlan Dr. [Clark] Bailey is known as “the beloved physician,” a title which one visit to his crowded office would well verify. We have long claimed him as a special friend of Pine Mountain. In times when have been without a doctor he has traveled the mountain over and over again, day and night, in all kinds of weather to answer our needs. He has been Chairman of the Harlan County Planning Council for two years, and is a member of our Pine Mountain Advisory Board.

-6-
Anyone who has known Pine Mountain very well is acquainted with Henry Creech, our neighbor, friend and counselor, and the son of Uncle William Creech. He and his brother Columbus are local members of the Pine Mountain Advisory Board. More than thirty years ago Henry as a very young man was present at the table when Rev. [Lewis] Lyttle, itinerant mountain missionary, brought Uncle William the good news that the “quare women” would come to start a school on Greasy creek. Ever since then Henry has kept the interests of the school close to his heart.

-7-
Mr. [Arthur W.] Dodd came to Pine Mountain from Berea College in 1932 as teacher of music, science and history. For two years he was Business Manager and for many years has been Principal. As such his part is a major one in the school and in the Pine Mountain Guidance Institute held each spring for the past seven years. Mr. Dodd’s wife is Georgia Ayers Dodd, a Pine Mountain graduate, and their daughter, Elizabeth Oaks, arrived just too late to be pictured in this family album.

-8-
Dr. Oma Creech is the daughter of Henry Creech, a granddaughter of Uncle William, and one of our alumni of whom we are most proud. She graduated from Berea, took her medical training at Louisville, and her internship at the New England Hospital for Women in Boston. She is now back in Kentucky, as doctor and health supervisor, helping to realize many of her hopes for her home state.

-9-
Winfield Cornett graduated in 1933, the first Pine Mountain boy to specialize in cooking. Through one of our staff members he received a place immediately, to work in a Boston restaurant. In the late summer of 1933 we watched him ride over the mountain on mule back, to take the bus for Boston. None of us, Winfield probably least of all, could dream that ten years later he would manage the restaurant, and today be manager of a defense refectory in Cambridge which feeds some 5000 people. He lives in Belmont, Massachusetts, with Mrs. Cornett and small Tommy.

-10-
Gola and Chloa Smith came together to Pine Mountain in 1932, riding horseback fourteen miles from Leatherwood Creek. Even now it is difficult to think of one without the other although they have followed widely differing careers. Gola studied at Eastern State Teachers College and is a teacher in an adjoining county. Chloa studied home economics and was our dietician, later head of the weaving department. She married Hayes bunch who is now one of Harlan County’s successful teachers. Their Barbara Hayes Bunch is another beloved grandchild of Pine Mountain.

-11-
Mable Weaver had nursing with Miss [Grace] Rood, and did her work in the school Infirmary. After her graduation in 1938 she entered training in Birmingham, and last summer she returned as registered nurse, to substitute during Miss Rood’s vacation. She is now a Second Lieutenant in the U. S. Army, and is stationed at Nashville Tennessee.

-12-
Claude Bryant has already appeared in our 1943 calendar, as the boy at the forge. He left last spring to join the Marines, and is somewhere overseas.

-13-
Paul [Hayes] is the last of the Hayes boys, all Pine Mountain students. He graduated in 1938, and was employed by the Davey Tree Surgery Company until he joined the Navy a year ago. He is at the Naval Reserve School in Cleveland, Ohio.

-14-
Arnie Hall graduated in 1939. Our latest word of him comes from French Morocco — a far piece from the mouth of Bear Branch Creek, where Frank Hall, Arnie’s father, carves our walnut broomhandles. Arnie is an accomplished woodworker and carpenter, and has already built a small house on Bear Branch. He and his family have long been loyal neighbors and supporters of our “Cabin,” the Line Fork Extension Center.

-15-
A few weeks ago our attention was called to a picture in the Louisville “Courier Journal” captioned “Youngest Sergeant in the U. S. Air Corps.” It was Hagar Blair, who left Pine Mountain to join the army two years ago. A few days after the picture appeared, Hagar himself appeared at the office door, on furlough, and was royally welcomed. He had come. he said from Panama, and would go “anywhere they send me.’ He modestly insisted that he wasn’t after all the youngest sergeant, and didn’t really “cut such a big figure.”

-16-
Out of our school group today we send you Nelle Shuler, a senior, and Jim Bishop, a junior. Nelle’s home is at Big Stone Gap, and Jim is from Berea. The picture shows a “class” in Surveying, which is taught to girls as well as boys, who have use for the knowledge.

-17-
These are the children of Pine Mountain alumni who are now a part of the active life at Pine Mountain School. They are Virginia Lee, Aubrey, Bernard and Wendell Tristram Callahan; Stephen and Helen Hayes; Barbara Wilder; Mabel and Ralph Cornett.

For a long time, we have felt that the scattered members of our large family might like to know more of their fellow members–how they look, what they are doing, whom they married, how many children they have. So now we are bringing you up to date with some of us, through this first edition of a family album. If you like it there may be a sequel next year. Will you let us know?

If you want to know about some particular person among the alumni or workers or friends, we will be glad to tell you what we can. If you know items of special interest, will you in turn tell us about them? Bonds of loyalty and friendship mean more than ever now. Our Pine Mountain family, like all proper mountain families, is large and loving. Sometimes we feel like Granny Begley, who when asked how many grands she had said, “Law honey, I couldn’t tell ye. They’s a pack of ’em. They was a sight o’ trouble to me sometimes but I wouldn’t take the whole wide world fer a single har on one o’ they heads.”