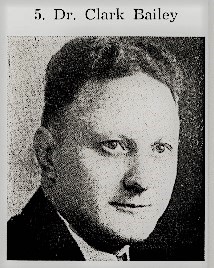 Almost anyone who came to work at Pine Mountain Settlement School in the 1930s through the 1950s would have encountered Dr. Clark Bailey during their first days at the School. New hires were sent to Dr. Bailey’s private office in Harlan, Kentucky, for a medical exam. If all was well, the worker received written certification, signed by Dr. Bailey, of their good physical condition. This document was then entered in the worker’s personnel file in the PMSS Office.

Medical examinations weren’t the only service Dr. Bailey provided the School. According to the 1943 Pine Mountain Family Album:

In Harlan Dr. [Clark] Bailey is known as “the beloved physician,” a title which one visit to his crowded office would well verify. We have long claimed him as a special friend of Pine Mountain. In times when [we] have been without a doctor he has traveled the mountain over and over again, day and night, in all kinds of weather to answer our needs. He has been Chairman of the Harlan County Planning Council for two years and is a member of our Pine Mountain Advisory Board. 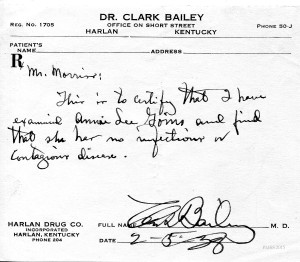 Dr. Bailey was also a longtime member of the PMSS Board of Trustees, possibly from 1943 and to 1955. However, his interest in Pine Mountain Settlement School extended beyond his service as a board member. While attending to the medical needs of the community, he often saw to it that the children received the good education that PMSS offered.

In the case of the Hayes Family, for example, he not only facilitated the hospitalization of the mother, Daisy Hayes, when she was diagnosed with tuberculosis. As described in the biography of William Hayes, he also became…

…the coordinator of many of the associated medical and social needs of the family, including the promotion of acceptance of Silven Hayes and John Hayes, his younger brother at Pine Mountain. He remained an advocate not only for the Hayes children but for many children in the coal camps and through his efforts many of those children came to Pine Mountain.

The October 1943 issue of Notes from Pine Mountain Settlement School paid tribute to Dr. Bailey, describing him as “a long time friend, staunch and expert in the time of need” in the unsettling times the School was experiencing during World War II. 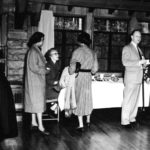