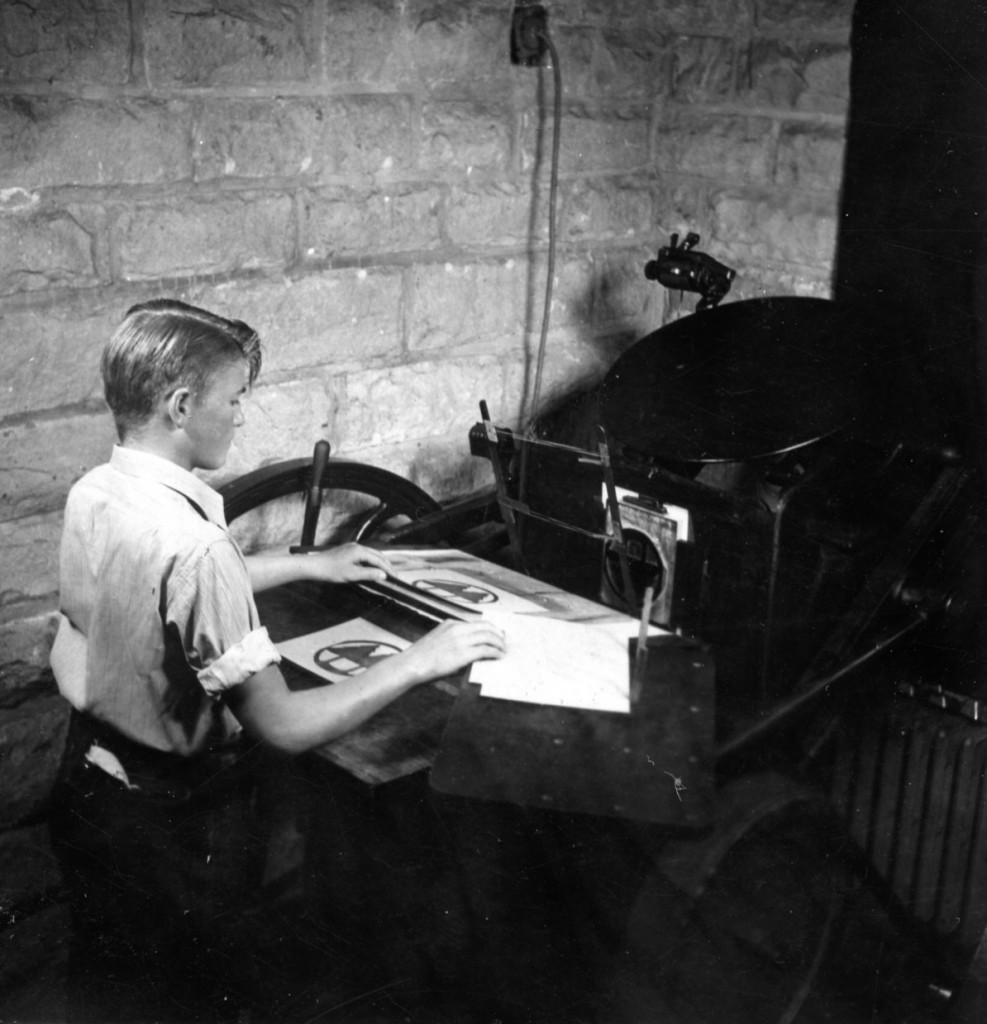 In her thoughtful “A Record of Pine Mountain Settlement School,” Evelyn K. Wells wrote succinctly about Education at the School. She said

A work program always accompanied the traditional educational curriculum even in the earliest years. And, as the school moved into the industrial age, the idea of an industrial education grew. Staff and students shared in the work program and a job well done was measured by an individual assessment of work well done (or, not) and entered into the student record. Uncle William, one of the School’s founders, had said to Pettit and deLong when they came to build the School that “It’s good for folkses’ characters to work with their hands.” The building of character through manual labor also meant learning to work together and in the 1930s and 1940s the introduction of a co-op module in the second year of study assured students of an experience working within a consumer’s cooperative. The Co-Operative Movement was worldwide and the elements of this consumer cooperation were studied from an international perspective. In the third year of their high school curriculum of the 1930s and 40s, the students focused on the surrounding community. The educational module looked at the settlement movement and its origins and how early work in urban settlement environments could be adapted to the rural community. The community groups under supervision visited in the nearby homes and offered basic hygiene, nursing, and literacy and recreation to their neighbors.

Education in civic engagement also extended to self-governance at the School and the Citizenship Committee comprised of students and staff devised the rules for living and the enforcement of those rules.  They also meted out punishment on their peers when rules were broken.

The Second World War brought most of these programs to an end and by 1949 the School had taken another educational direction that joined the Pine Mountain community with the growing public instruction of the county. True to its history of adaptation, Pine Mountain charted a new educational course. The Community School took the best of the Boarding School years that ended in 1949 and merged them with essential elements of the local school system. The Board of Trustees also appointed a “Key Committee” to study the prospects for the School that would not lose sight of the basic mission of the institution — Uncle Wiliam’s mandate that the campus be used ” … for school purposes as long as the Constitution of the United States stands, hoping it will make a bright and intelligent people after I’m dead and gone.”

In the interest of maintaining its “school purpose,” Pine Mountain forged a new relationship with Berea College which mandated that the School would continue to operate as an independent entity, but in an affiliation with the college. The idea that Pine Mountain would have the advantage of Berea’s expertise, its student teachers and its capable members represented on the Board was, as Mary Rogers put it, a leap of faith. What was immediately evident was that the School would no longer control its educational curriculum and that it would be charged with adapting to the public school regimen. It was during this period of transition that the “Little School” or pre-school was born and, in the early sixties, Pine Mountain was leading the way in the new national program called “Headstart.”

[Anon.] “Education That Fits” This article, found in Berea Quarterly of 1908, covers education in the Southern Appalachian mountains and stresses that education must “fit actual conditions.” It contains examples of the extension work of the early college of Berea and of the developing settlement schools in southeastern Kentucky.