The Medical Settlement – Big Laurel was the first of seven planned outposts that Miss Katherine Pettit, the director of Pine Mountain Settlement School, hoped would serve a larger community. It was begun in 1918 and the first structure, the “Cabin” completed in 1919.

The outposts were conceived as medical and educational satellites for the central settlement school at Pine Mountain. Their administrative structure was quasi-autonomous but they reported to the Pine Mountain director and were included in all fundraising and annual reports. 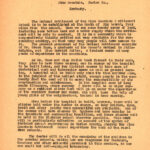 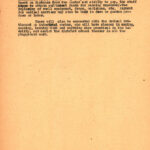 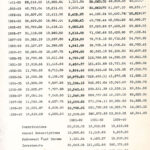 In 1920 Angela Melville, a worker at Pine Mountain spent nearly six months fundraising for the settlement extensions. She was quite successful, as the November 1920 issue of Notes from the Pine Mountain Settlement School tell us:

MISS Angela Melville spent six months of this year raising a fund with which to carry on the extension work to which Pine Mountain has long looked forward. Old friends will remember that an important part of our original plan was the establishment of little centers on the remote creeks untouched by upbuilding influences. …

In Kentucky and Ohio and other locations, Angela Melville raised nearly $14,896 which was to be split, with half going toward actual construction and staffing costs of the new extensions and the other half toward an endowment that would grow to support the satellite operations.

A gift of $3,500 to fund the initial housing of the Medical Settlements, the so-called “Cabin,” came from Mrs. Mary Emery, of Cincinnati, Ohio. Completed in 1919, the Cabin accommodated staff and served as the office. The second construction in 1920 was the “Playhouse,” which served as a community center. It burned in 1925.

The third important construction was a stable to shelter the horses. The stable was a necessary facility for the rural visitation of doctors and nurses in a region that had no roads of any consequence. Two of the first equine residents of the Medical Settlement complex were “Billy” and “Maude.” Both horses endeared themselves to the staff at the facility, as often life and limb depended on the reliability of their transport.

The Playhouse was re-built in 1926 and was again conceived as a community center that could house large groups, and was also given the addition of a clinic room. This time the scale was even larger. It was the gift of friends of Pine Mountain Settlement School from New England who were acquaintances of Katherine Pettit, director at Pine Mountain. The new Playhouse was also planned to include living quarters for a worker who would be the teacher for the outpost and expand the offerings of the facility for the local schools.

The first resident of the new Playhouse building was Miss Emily Storer, (? her dates do not match) from Boston, Massachusetts. She joined Dr. Grace Huse and Harriet Butler (the so-called “Community Nurse”) who were already in residence in the Medical Settlement’s main Cabin.

… were our first efforts at moving Mahomet to the mountain, and they have demonstrated how keen our neighbors are for better trained leadership. Sewing classes, Sunday schools, playground days, district nursing are crying needs of every little community — and the neighbors will do all they can to provide for them.

Katherine Pettit, Ethel de Long Zande, and others at Pine Mountain were no doubt nudged into action by support from John C. Campbell of the Russell Sage Foundation, who had visited the School and had often stated his belief in extension work, saying:

Spread yourselves thin. Go where the people are, and don’t depend only on your parent school. Hundreds of people can be reached if you send out to them, who will never get to you if you sit at home. [Notes, Nov. 1920]

The work at the Medical Settlement continued under various leaders until 1960 when the facility was rented out to independent community groups that continued occupancy until 1970. By c.1973 the facility was abandoned due to deterioration. The buildings and land were sold to Alvin Boggs, a resident of the Big Laurel area and later director of the Pine Mountain Settlement School. Boggs had the log cabins deconstructed and removed to his property next to the Pine Mountain Settlement School where he established a religious center for the community.

Big Laurel also utilized a rotating series of nurses and physicians who worked at the Pine Mountain Infirmary and also provided clinic support at both the Big Laurel and the Line Fork extension centers when needed.