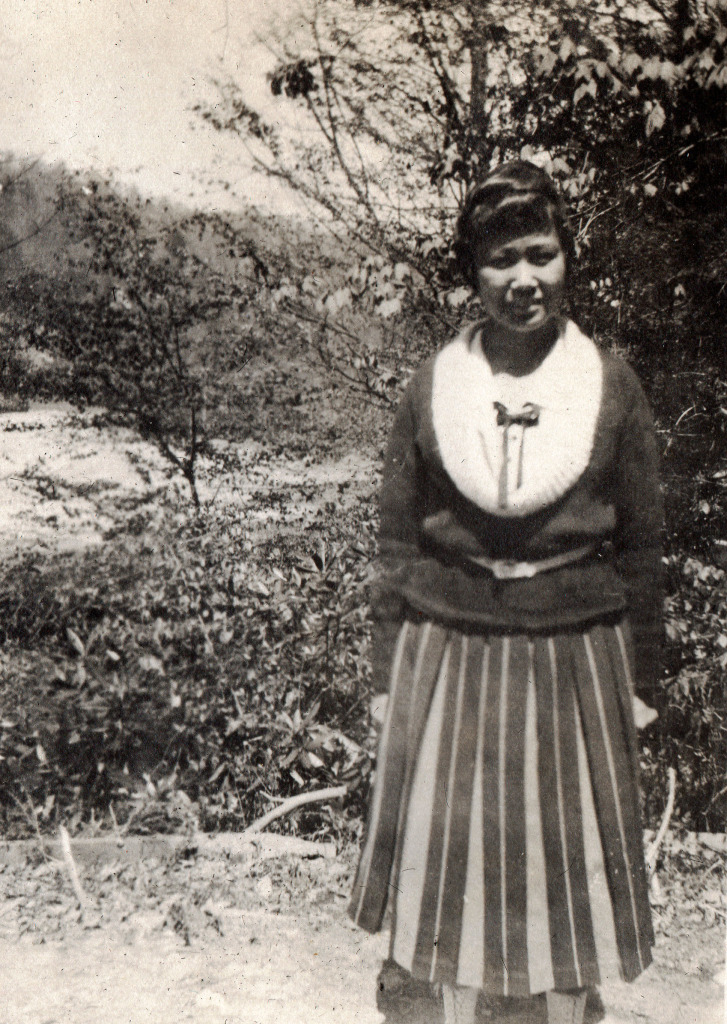 Maya Sudo (d. 1924) came to Pine Mountain in 1921 and was hired to work as a nurse at the School. She was assigned to the Infirmary, but also worked with Harriet Butler at Big Laurel and possibly at Line Fork extension, as well. While she was hired to be a nurse, like many of the staff, she also served as a teacher and, most likely, as an industrial worker. The industrial workers were responsible for training that would hopefully lead to employment for the children and young adults associated with the settlement school and the extension centers.

“Monday we were all ready for clinic. The nurses from Line Fork and Big Laurel were here, a dozen children in bed with two dozen doses of castor oil in them (they requested this much) and the doctors never came — we didn’t give them up until Tuesday night. Some patient in Louisville was very ill and one doctor couldn’t leave. Three were coming. Of course there was no clinic so Monday night I had Miss Metcalf [Ann Ruth Metcalf, Nurse at Line Fork], Line Fork nurse, and Miss Sudo [Maya Sudo] our Japanese nurse. She is loads of fun and has the keenest sense of humor. Did I tell you she remembers me from Silver Bay [NY] ? Her name is Mayo [sic] Sudo and she is a dear friend of Kato [sic] Yamada [Koto Yamada, graduated 1916], Vassar [College], 1917.”
– Marguerite Butler Letters, Sunday, November 1921

This brief note in the Marguerite Butler Letter of November 1921 provides information which is difficult to locate about Maya Sudo. While it is known that Maya came to the United States while very young and was one of six siblings (one sibling died of smallpox in Japan at a young age), little is known about what prompted her journey to Pine Mountain in 1921. The brief background provided by her niece, Frances Ogasawara, the daughter of Ren Narita Ogasawara (b. March 25, 1896), Maya’s younger sister, has helped to fill in some of her biographical information, but work remains to be completed.

The Maya Sudo Photograph Album loaned to Pine Mountain to be scanned, has ample images that record the short life of Maya, who died in Philadelphia following a routine gall-bladder operation, but few notes accompany the images and many locations remain unidentified. Maya left Pine Mountain Settlement School in 1924 and was scheduled to work at Jefferson Hospital in Philadelphia, but following surgery for the gallbladder issue, she did not fully engage her new job.

Educated in an English language school in Japan, Maya and her five siblings came to the United States, first landing in Seattle, Washington, and immediately leaving for Westdale, New York, to a farm owned by the Kelsey family. Their mother, who was diagnosed with trachoma in Seattle, was returned to Japan, as the disease was considered contagious and admission to the country was denied. She was never reunited with her children.

While in Westdale, at the Kelsey home, Maya completed her Regent’s exam. The story is told of her ride by horseback to a neighboring town to take the exam and the “smart” horse that found its way back home.

Maya’s siblings spread throughout the country. Her older brother, Kaichi, lived in Michigan, near Detroit and her younger sister, Suye Narita Gambino, lived in New York and was the custodian of the cottage where President Ulysses S. Grant died. [Frances Ogasawara and her sister, Maya’s nieces and Ren Narita Ogasawara’s daughters, came to New York to live with Suye Narita for a time in the Grant cottage.] Jean Narita, Maya’s sister, married Gengoro Yoshida who was associated with the farming collective known as the Yamato Colony, near Boca Raton in Palm Beach County, Florida. The couple lived with an aunt, Kaku Sudo, who was a physician.

Jean and her husband lived with other Japanese emigrates in the Yamato Colony that was a well-known farming commune in the Palm Beach area. Life in this unique agricultural colony is recorded in documents held in the Morikami Museum at Delray Beach, Florida. The documents record the life of the colonists, including Maya’s relatives. The colony has some remarkable similarities to the agricultural challenges found at Pine Mountain. Also of note is the death of Jo Sakai, the founder of the Colony, who died in Asheville, NC, where he had gone to battle tuberculosis, on August 21, 1923. Additional information about the Colony can be found in the Spring 1985, Vol XIII. No. 3, Spanish River Papers, published by the Boca Raton Historical Society.

How Maya was recruited to Pine Mountain is still not known, but her sister Ren noted that her stay at the School was one of the happiest times in her short life. The brief note by Marguerite Butler confirms this pervasive happiness, as do the myriad of photographs. The record for Maya is thin, but her photographs and her life, as reconstructed through her remaining family and her friends, have yielded a tantalizing portrait of a bright, happy, progressive and civic-minded young woman.

Some of Maya’s brief history and personal convictions may be explored through her friendships. For example, in the work of Maya’s friend Koto Yamada, a Vassar graduate and the connection with Pine Mountain’s Marguerite Butler, some glimpses of Maya’s sentiments and those of many women of the time, may be discovered. For example, in 1915 Koto wrote for the Vassar Miscellany News an article entitled, “Woman Suffrage in Japan.” The article, a very perceptive view of her homeland and the struggle of women against the tyranny of tradition, is universal in message. She says,

“Give us Suffrage!” what a noble cry! It is to me as noble and sacred as the cry which echoed among the valleys of the Seine more than two centuries ago . . . . I look upon American sisters, who are fighting for this great cause, with admiration and wish them great success. It was some years ago that the English Suffragists wrote to some leading women in Japan kindly inviting them to join their movement and that those Japanese women refused to do so. This made some people think that the Japanese women are still mentally sleeping and cannot be made interested even in their own affairs. I acknowledge that they are certainly far behind others in many ways, but that they are wide awake, and are struggling to go forward, and are advancing, though very slowly. . . . Japanese women are not born to march forward and fight publicly so you may not see us possess the privilege for some years to come. Someday, however, I hope we shall be able to enjoy it as some of you in America are doing now and others are going to in the near future.

Koto Yamada graduated from Vassar in 1916 and returned to Japan to teach English at Tsuda College in Tokyo. By 1926 she had returned to the U.S. and is recorded as attending graduate classes at Columbia University in New York. One of the faculty at Vassar, Caroline E. Furness, had a special interest in Japan and had known Koto Yamada while she was a student at Vassar. Koto was among several other Japanese graduates, including Princess Oyama, the Baroness Urin, and Nalte Amagasu, enrolled in Vassar. In 1918 Furness took a leave of absence to travel to Japan as an informal ambassador of the Educational Committee of the National Council, an arm of the American Collegiate Association (ACA). She was charged to form a branch of the ACA in Japan to study the social welfare and civic improvement enterprises for women, educational institutions, and women’s scientific research, and to report back to the Educational Committee of the National Council. Appointed by Lois Mathews, President of the American Collegiate Association, Furness also carried various letters from women’s organizations as well as from the Vassar Alumnae Association. Furness’s work laid the foundation for the development of additional women’s colleges in Japan and assisted the State Department’s efforts to squelch the “adverse propaganda” efforts of America’s enemies during the Great War. [See Vassar Miscellany News, Volume II, Number 55, 25 May 1918]

The journey of Caroline Furness to Japan and the long journey of Maya, her relatives in the Yamato Colony, and Koto Yamata, to America began a succession of associations of Japanese women and American women as they struggled for women’s rights. In an address at the Vassar sister college of the Orient, the Women’s Christian College of Tokyo, the speaker quoted Matthew Vassar’s well-known sympathies: “It occurred to me that woman, having received from her Creator the same intellectual constitution as man, has the same right as man to intellectual culture and development,”

As one of the earliest Japanese women to complete her education in America, Maya Sudo, like her Vassar friends, helped to set the bar for women’s rights and civic engagement on both sides of the ocean. The full biography of Maya Sudo remains to be completed, but in her short life, she clearly left her wisdom and her joy with the many lives she touched.

Pine Mountain would like to thank Frances Ogsawara, niece of Maya Sudo and a resident of Asheville, NC, for her loan of the Maya Sudo Photograph Album for scanning and for her time in sharing the audio history of Maya and her family. Further, Frances has left her own significant contribution to history. As a graduate of Wellesley College and Yale University, Frances has been very active as a health consultant, serving as program consultant, National Tuberculosis Association (NTA) and Coordinator of the TB Eradication Project, Field Services Division, NTA, New York City. She also served for many years as the Associate Managing Director of the American Lung Association and has written the definitive history of the organization: Ogasawara, Frances R., History of the American Lung Association, New York: American Lung Association, 1994.

Any additional information regarding Maya Sudo would be appreciated, as would corrections to this small sketch of her life.