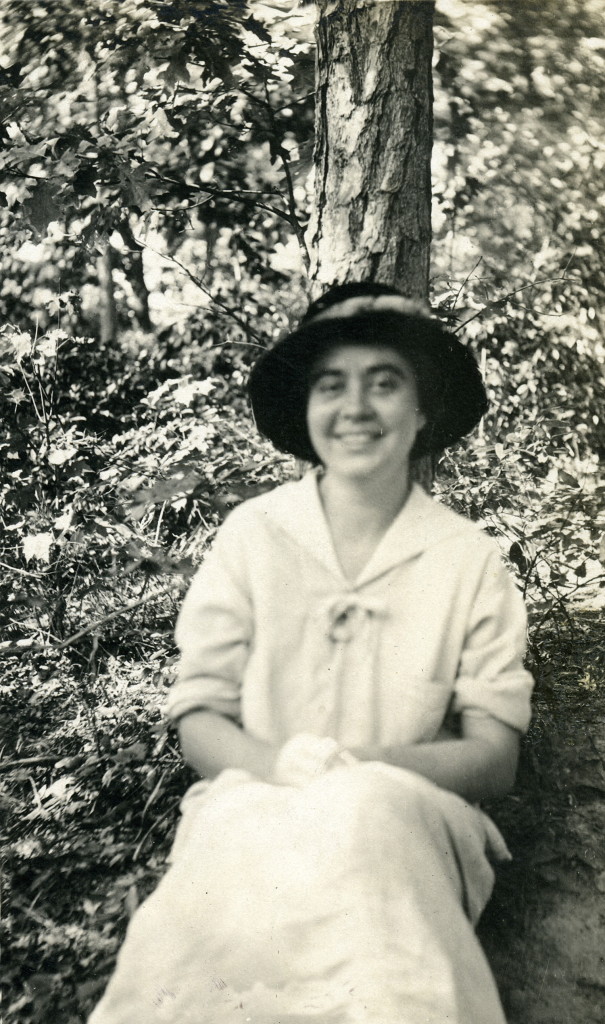 Marguerite Butler, a young woman from Cincinnati, Ohio, and a recent graduate of Vassar College in Poughkeepsie, NY, arrived at Pine Mountain Settlement School on August 13, 1914, with plans to teach for two years, unaware of the hard-won successes, heartwarming relationships, as well as tragic events she would experience. Miss Butler, however, had all the attributes required to deal with both the good and the adverse times that she encountered in the eight years she finally spent at the School. Pat McNelley described Miss Butler in The First 40 Years: John C. Campbell Folk School as follows:

…[S]he had abundant use for all the Sociology and Economics she had learned at college, plus all the natural resources of her dynamic personality. At that time roads were trails, in and out of creeks and often the creek bed itself; third grade was the top class at Pine Mountain…. Her inherent ability as an organizer, her untouched gift as a leader, were put to work. This was a job that required tireless physical energy….

Miss Butler arrived during the earliest years of the School, when construction of only two permanent buildings had been completed – Big Log and Old Log – and 28 to 38 children boarded at the School (plus 15 who lived in nearby homes). The following accounts were recorded in letters to her mother, father, and sister Jeannette, which she often signed as “Muggins.”

Marguerite’s first Pine Mountain teaching assignments were history and geography to elementary grade students, arithmetic to first graders, and private tutoring for older students. At first, the third and fourth grades were the highest level necessary. It took several years to add an eighth grade and a graduating class.

She accepted no pay the first school year, because, as she wrote, she felt the School had too desperate a need for money. In the second year, she received $25 a month and “thought I was rich. I only wanted to cover [my] expenses and be independent.”

Another young teacher, Margaret ‘Peggy’ Watts, roomed with Miss Butler in Big Log , a house where Katherine Pettit, a cooking instructor, three teen-aged “mountain girls,” and two children also lived. It was a house that she described as “the most attractive” and “the cleanest one I have ever seen…for every morning the girls sweep and dust it from top to top.”

Assuring her mother, “Yes, you see, we do put on style even if we are in the mountains,” she enthusiastically told of furniture made by the boys at the School; handwoven curtains, rugs, and baskets; an immense fireplace with an antique clock on the mantle and bookcases on each side; and windows that “open out…like French ones!” However, when the building’s “sleeping porch” was needed for guests, the two women moved to a tent in which Mary Rockwell (Hook), the architect of the School’s buildings and campus, was staying. 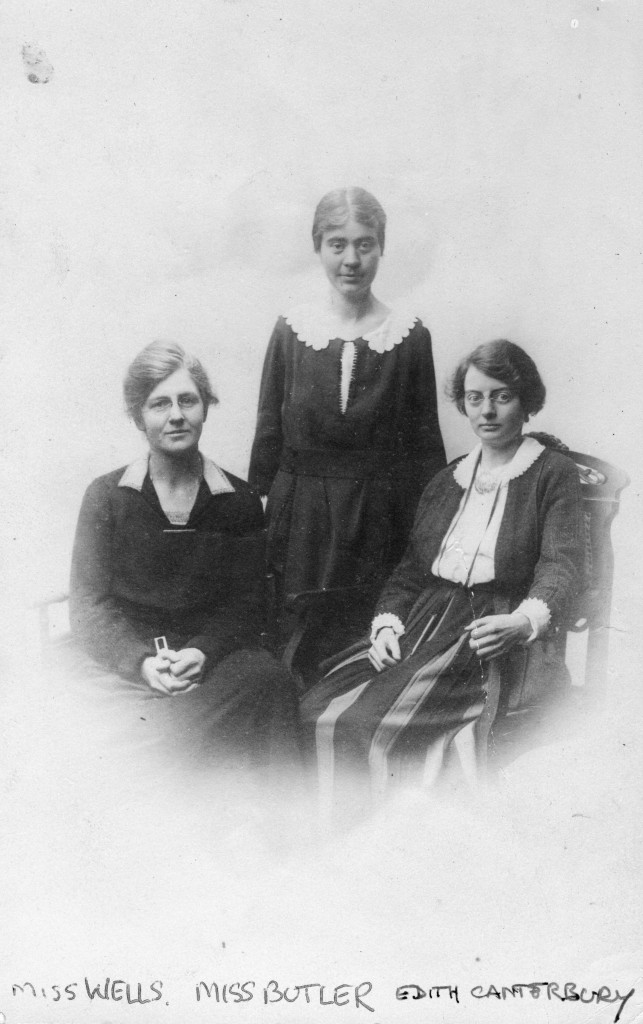 The teaching position at the School, she soon discovered, also included bathing the children, putting them to bed, tracking them down when they missed school, and administering smallpox vaccinations. She became attached to her “family” of children, delighting in their progress, not only in academics, but in learning the basics of personal care. Various teachers, visitors, and people in community became dear friends of hers, including Evelyn Wells, Frances Lavender, Celia Cathcart, Mr. Roettinger and his daughter Elizabeth, and the Creech family members, particularly “Aunt Sal,” who felt that Miss Butler was “like [one of] her own children.”

In a 1969 letter to Mary Rogers, wife of Director Burton Rogers, Miss Butler fondly reminisces about those days: “How many suppers at Delia’s and Aunt Sal’s!! I especially enjoyed the old folks, but then I loved the children too and felt very close to some my own age….” After re-reading the letters of her youth and reliving the Pine Mountain experience, she stated that “Again I realize how much Aunt Sal, Uncle William, Delia, Henry, [all Creeches] etc. meant to me.”

Miss Butler often wrote as well about the beauty of the surroundings, picnicking, moonlit nights, visiting Jack’s Gap, wildflowers, flowering trees, and taking the children on field trips. She enjoyed the campus’s laurel, rhododendron, and English ivy which she helped plant.

Not all events were happy ones, but instead tested her ability to respond appropriately, adapt, and persevere. In April 1915, she helped fight a forest fire on the mountain and in 1919 fought the fatal Burkham School House fire. She wrote her opinion of the murder of a School worker [Laura Parsons] and about an acquaintance who died as a result of a moonshiners’ feud. She attended to several students injured in accidents and assisted with the burial of Celia Creech’s child.

By 1919 two more buildings were under way: the Office and the second Burkham Schoolhouse. At this time, Miss Butler was given the job of supervising the work on the proposed settlement extension at LINE FORK. She was charged to improve on a temporary log house at Line Fork, near Gilley, Kentucky, six miles north of the main Pine Mountain campus and to establish the plan for construction of permanent housing. Line Fork was proposed as the second of the nine [some records say seven] satellite settlements that Pettit and de Long proposed to be associated with the central Pine Mountain Settlement. The crude Cabin at Line Fork was for the earliest teachers, industrial workers, and nurses that were to staff the extension centers. She then supervised the construction of a permanent Cabin [The Cabin] and participated in teaching sewing classes. She performed these tasks so well that Miss Pettit, Mary Angela Melville, and Ethel Zande decided to appoint her superintendent of all extension work in 1920.

In her last years at Pine Mountain she also provided assistance as an extension worker. She was the supervisor of eleven one-room schools that had then been assigned to the Harlan County Superintendent of Schools. Her work involved visiting the schools on horseback, often staying away one or two nights before returning home.

Also in 1920, Miss Butler spoke before the fiscal court to procure money for the proposed Laden Trail road from the railroad station at Laden to Pine Mountain and on to Big Laurel and in 1921 was sent on a speaking tour to various Ohio cities and Chicago to raise money for the road and the School. She wrote an article about school work for the School’s newsletter, Notes from the Pine Mountain Settlement School [1920], became Deputy Commissioner of the Girl Scouts, and also taught Sunday School.

In a letter to Mary Rogers in 1969, she explained that from 1917 through 1922 her one-room schools operated for only five months, having to close in the fall for “foddering,” a family farming practice, and ending at Christmas due to the difficulties of winter travel. So, she relates, Sunday School “lasted 2-3 hours to help take the place of school.” 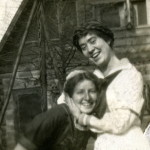 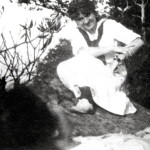 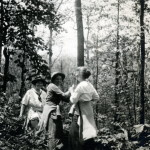 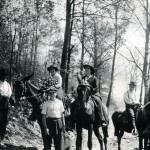 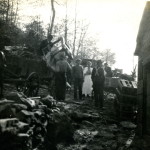 A private school working with County schools was so unusual for the time that Miss Butler was invited to speak about her work at a 1919 Conference of Southern Mountain Workers. While there, she met Olive Dame Campbell whose interest in education and folk culture overlapped her own.

Miss Marguerite Butler, our extension worker, is on leave for a year’s study of the folk schools of Denmark. She is working there with Mrs. John C. Campbell, widow of the late head of the Southern Highland Division of the Russell Sage Foundation, and author of the “The Southern Highlander and His Homeland.” Miss Butler expects to bring back many helpful ideas for her extension work in connection with the country schools.

Three years after Mrs. Campbell’s husband, John C. Campbell died suddenly in 1919, Miss Butler was invited to join Olive Dame Campbell on an extended visit and training in the Danish folk school model. The year’s study in Denmark of the dances, games, and structure of Danish folk schools was transforming for both women. The two women spent another two months in England and Ireland to learn about the adult education movement there. In England, Miss Butler visited with folklorist Cecil Sharp (who had, in turn, visited Pine Mountain) at his folk dance school.

Her college newspaper the Vassar Miscellany News, Volume VII, Number 48, 28 April 1923, noted her work with Pine Mountain and her interest in the Scandinavian adult education model stimulated by her study in Denmark. “Adult education” in the Scandinavian model referred to the education of adults between the ages of 18 and 30 in schools that originated in Denmark, Norway, Sweden and Finland. According to the Vassar College article, Marguerite wanted to “learn how the Scandinavian idea can be applied to the southern highlands.” The paper noted that “Miss Butler is studying the work of six schools, which have been carefully selected with a view to primitive conditions. She is also studying the cooperative movement in the highly developed democracies of the north.”

When Marguerite returned to the States in 1924, she was recruited by Mrs. Campbell to assist in founding of the John C. Campbell Folk School in Brasstown, NC, named in honor of Mrs. Campbell’s late husband and based on the Danish model for folk schools the two had studied in 1923. In 1928 she returned to her alma mater, Vassar College as a guest speaker to the Curriculum Committee to describe her Scandinavian experience and the work she engaged at Pine Mountain and was currently doing at the John C. Campbell Folk School. Her talk, “The Danish Folk School and its Application to American Life,” was arranged by two Vassar students who had spent their summer in North Carolina. Marguerite addressed the need for a progressive education that focused on engaging the student rather than imparting knowledge. She certainly was the expert on “hands-on.” [Vassar Miscellany News, Volume XIII, Number 7, 20 October 1928.]

We are losing this spring, with deep regret, several members of the old guard. Miss Marguerite Butler has been with us off and on for nine years, first as teacher, then as extension worker. Last year she spent in Denmark, Norway, Sweden, and Finland, studying their folk high schools, and has come home to promote the cause of adult education in the mountains. With whatever splendid work she associates herself, we shall always be proud and grateful for the years when she belonged to Pine Mountain.

In 1926 Georg Bidstrup from Denmark was hired by the North Carolina folk school to manage the farm and instruct folk dancing. In 1936 he and Marguerite married and, together, their interest in folk dancing flourished. Mrs. Campbell was the school’s director until her retirement in 1946 and Miss Butler acted as treasurer and assistant director at various times, and served on the school’s board. Georg Bidstrup became director of the John C. Campbell Folk School in 1952.

As of 1969, Mrs. Bidstrup was living on Bidstrup Acres in Brasstown, NC. In 1970 Georg and Marguerite Butler Bidstrup were the first recipients of the Brown-Hudson Folklore Award – presented by the North Carolina Folklore Society to persons who have in special ways contributed to the appreciation, continuation, or study of North Carolina folk traditions. The Bidstrups were honored as folk dance teachers, festival organizers, and administrators of the John C. Campbell Folk School.

Marguerite Butler Bidstrup was born on February 14, 1892, and died in April 1982. Her grave is located in the Little Brasstown Baptist Cemetery, Cherokee County, Murphy, NC. She left four acres of land near the John C. Campbell Folk School to Gus and Maggie Masters, teachers of enameling and co-directors at the school in the 1970s.

…[S]he has shared her wealth of experience as an administrator and teacher, her love of the folk ways and dances, and has steadfastly maintained her confidence and respect for the stalwart character of the people of Appalachia.