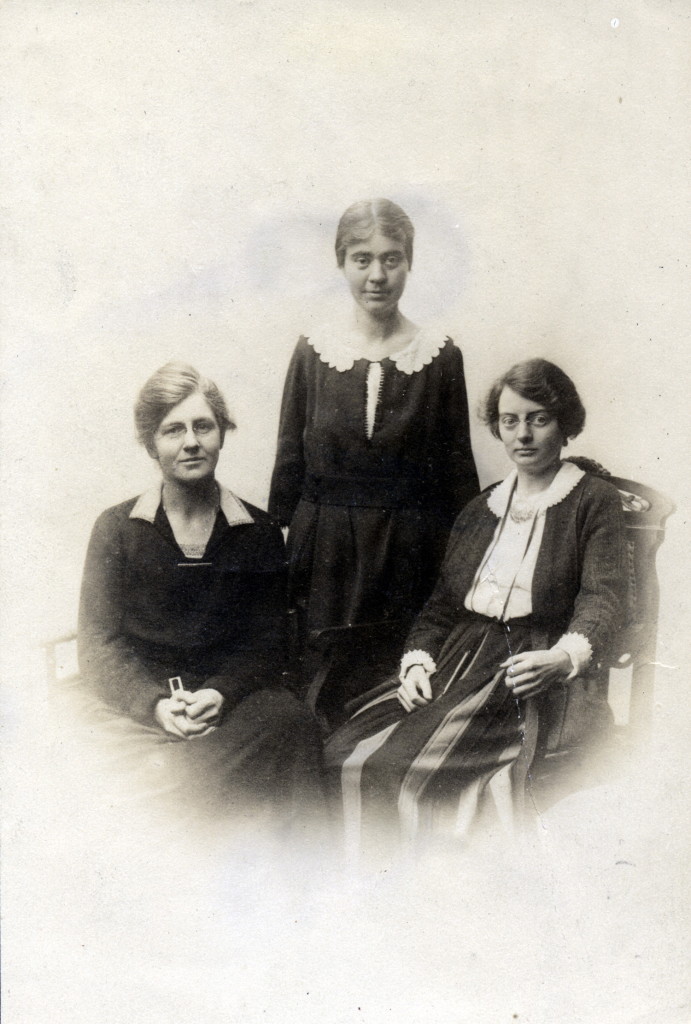 Edith Canterbury was one of the earliest staff members to work at Pine Mountian Settlement School from 1916 until 1918. She was a close friend of Marguerite Butler, a staff member who came to Pine Mountain during the first decade of its work.

Later in her life, Edith was called into service by Olive Dame Campbell to help her edit the papers of her late husband, John C. Campbell. When Olive Dame Campbell died, Canterbury continued to work on the material as noted in this 1960 correspondence with Burton Rogers, Director at Pine Mountain.

Just now I am having the privilege of doing an assembling and editing of the “Life and Letters of John C. Campbell” which was begun by his wife before her death. I am in the period of Cecil Sharp’s ballad collection, — such a delight to be “living” in as I am! You recall probably[?], that Mr. Campbell was the Secretary of the Southern Highland Division of the Russell Sage Foundation until his death in 1919.

(See The Life and Work of John C, Campbell by Olive Dame Campbell.)

Miss Canterbury continued to be in contact with Pine Mountain Settlement School throughout the rest of her years, often sending contributions along with her letters. In a letter to director Burton Rogers, dated June 16, 1961, she wrote:

I hope to see the school again some day before long. I remember it so well and with such affection from my two years there as a teacher, living in the Big Log House with Miss Pettit — 1916-18.

Very little information about Edith Canterbury’s time at Pine Mountain Settlement School has been found in the PMSS Collections. However, the U.S. Census and other resources provide some of the details of her life.

The Wellesley College Bulletin Calendar 1913-14, lists her as having received a Bachelor of Arts at Wellesley (MA) College in 1913.

As of 1920, at 28 years of age, Edith was a boarder in a house in Boston and employed as a social worker at the Russell Sage Foundation. In 1923, she applied for a passport to travel to Denmark and Switzerland for a “study of Folk High Schools.” In 1930 and 1940, she was living in Boston with her mother and employed as a social worker in a hospital. Her brother Malcolm, a civil engineer, had joined them as of 1940.

Edith Canterbury died on November 9, 1963, at the age of 72. She was buried at Fairmount Cemetery in her hometown of Weymouth, Massachusetts, alongside her brothers and a sister-in-law. 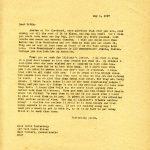 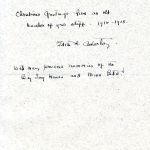 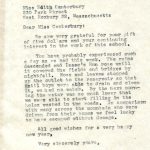 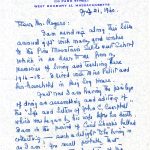 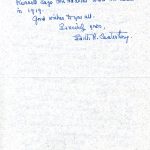 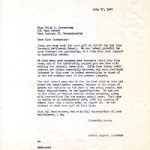 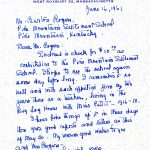 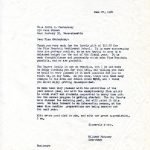 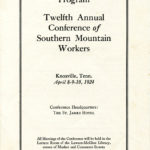 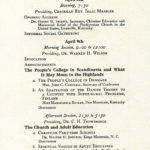 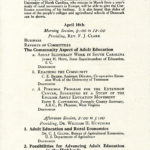 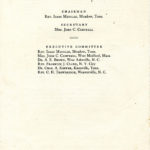 Dear Edith:
Azalea on the fireboard, more glorious than ever you saw, wild cherry and all the rest of it in bloom, and May Day over! Now I wish you could have seen our May Day, just like Mr. [Cecil] Sharp planned, with morris and sword and country dancing. I wish you could know Miss [Dorothy] Bolles and Miss Cunningham and get them to tell you all about it. They are as much at home here as those of us who have always been here. Miss Cunningham’s address is … Commonwealth Avenue, Boston. Perhaps you can look her up sometime.

Thank you so much for Lilliath’s* [Lilliath Robbins Bates] letter. I do want to keep it a good deal longer so that many people can read it. My friends in Lexington whom she once visited are so anxious to have news too. Perhaps you mean for me to keep this copy. If I don’t hear from you I am going to assume that you don’t want it returned. I hope that will be all right with you. I am so proud of the things those two people have done and that they want to stay on the job and refused to leave. I am so glad that they found each other, for they are truly great. I think Searle Bates is one of the most interesting people I know, and you know his father is one of the greatest men who have ever been here. I heard Miss [Evelyn] Wells say she never heard anybody give a better talk than his sermon. Have you seen all the things that Searle wrote his father? He sent them to me and if you would like I would be glad to send them on to you. It gives an account of the situation from another point of view. Are any of Lilliath‘s friends sending money? I realize how useless it would be to send things and that money amounts to so much more. If you are sending money may I send you a check to put in with it, as it is so hard to get money fixed up to send from here.

*”Lilliath” is a reference to Lilliath Bates, the wife of Searle Bates who was caught up in the Nanjing Massacre in China in 1937. Many Pine Mountain Workers had a direct connection to the events in Nanjing through the Yale in China program which included friends who worked in the program as well as at PMSS, particularly Burton Rogers. An earlier participant in the extreme events in China was Llewella Merrow, a doctor who worked at the women’s school at Jinling, China, as well as at Pine Mountain. Bates was the son of the former President of Hiram College.

Christmas Greetings from an old member of your staff – 1916-1918.
Edith R. Canterbury
With many precious memories of the Big Log House and Miss Pettit!

Dear Miss Canterbury:
We are very grateful for your gift of five dollars and your continuing interest in the work of this school.

You have probably experienced such a day as we had this week. The rains descended and Isaac’s Run rose until it covered the fields and bridges by nightfall. Moss and leaves stopped up the outlet to the reservoir so that until boys were abie to drain and clean it, we had no water. By the next morning the water was so much lower that we were able to start filling in the holes washed in the roads. In comparison with many across the mountain who were driven from their homes we feel lucky to have escaped without damage.

Dear Mr. [Burton] Rogers:
I am sending along this little annual gift with many good wishes to the Pine Mountain Settlement School which is so dear to me from my memories of living and teaching there 1916-18. I lived with Miss Pettit and her household in Big Log House.

Just now I am having the privilege of doing an assembling and editing of the “Life and Letters of John C. Campbell” which was begun by his wife before her death. I am in the period of Cecil Sharp’s ballad collection, — such a delight to be “living” in as I am! You recall probably[?], that Mr. Campbell was the Secretary of the–

–Southern Highland Division of the Russell Sage Foundation until his death in 1919.

Good wishes to you all.
Sincerely yours,
Edith R. Canterbury

Dear Miss Canterbury:
Thank you very much for your gift of $10.00 for the Pine Mountain Settlement School. We are indeed grateful for your kindness and generosity, at a time when such support is especially needed.

We also very much enjoyed your comments about your time here, and of the interesting project you now have with editing the Campbell materials. Gifts from former staff members are always especially welcome, and your continued interest in this area is indeed encouraging to those of us who are working here in the present program.

The past school year was by far the best that we have had under the consolidated program, because of the signs of growth and maturity on the part of our young people, and their responsiveness to new opportunities. We are now in the midst of various special summer programs, along with preparations for the coming school year. That year is coming at an unbelievable rate, with the opening of school. less than a month away, on August 22. We are pleased to have your gift at this time.

With all best wishes, and with full appreciation of your helpfulness, I am,
Sincerely yours,

Dear Mr. Rogers:
Enclosed is check for $10.00 as contribution to the Pine Mountain Settlement School. I hope to see the school again some day before long. I remember it so well and with such affection from my two years there as a teacher, living in the Big Log House with Miss Pettit — 1916-18.

I hear fine things of it in these days thru your good reports and letters, as this of May 20. My warm good wishes to you and Mrs. [Mary] Rogers.

Dear Miss Canterbury:
Thank you very much for the lovely gift of $10.00 for the Pine Mountain Settlement School. It is more encouraging than you perhaps realize, as we are trying to come to a balanced budget for the end of the fiscal year. It is such thoughtfulness and generosity which make Pine Mountain possible, and we are grateful.

The Rogers family is now on vacation, but I do not want to delay thanking you for this help, and telling you that we would be very pleased if it were possible for you to visit us, at any time. As you know, there have been many changes in the area and School since 1918, and I think you would enjoy getting re-acquainted.

We have been very pleased with the activities of the past school year, and with the exceptionally fine spirit in which staff and students cooperated to carry them out. Now the summer program is getting started. The Boy Scouts have cleaned the swimming pool, and will paint it this week. We look forward to an interesting season, at the same time routine preparations are being carried out for next year.

With every good wish to you, and with our great appreciation,
I am,