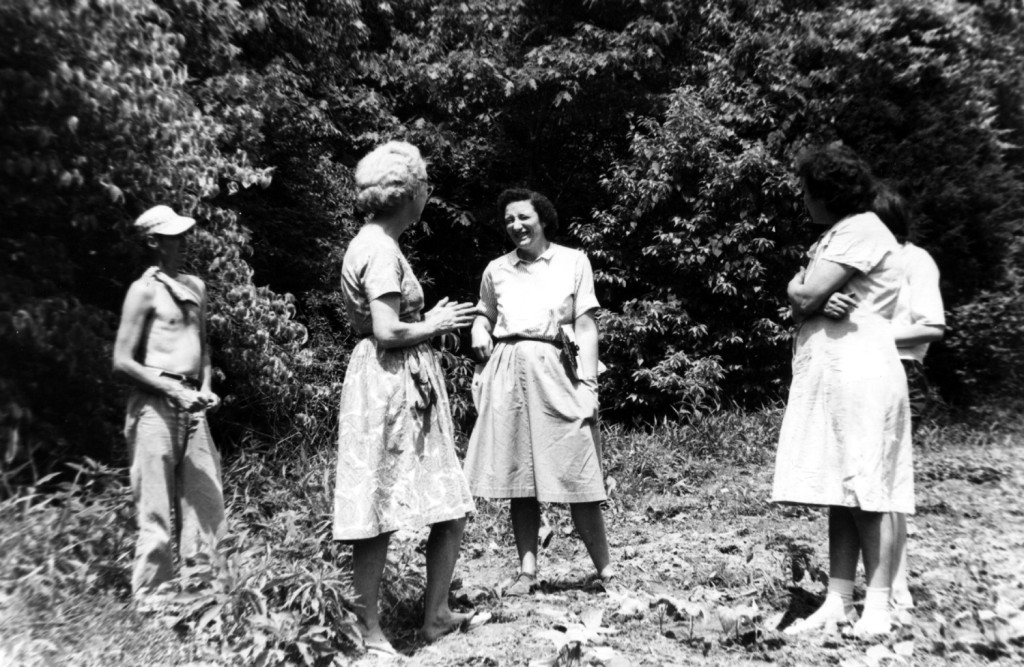 Mildred M. Mahoney, known as Milly Mahoney, arrived at Pine Mountain Settlement School in 1953 at the age of 28 to teach in the community elementary school. She remained at the School as a teacher until 1964. When the Settlement School was consolidated in 1971  she was instrumental in establishing a “Little School,” which became a model for Harlan County early education programs and a major influencer on the early development of the National Head Start program which incorporated her recommendations into the National Head Start program.

Known for her competence, strong work ethic, and commitment to the success of the Settlement School, Milly was often relied upon to temporarily fill in a position when her talents were needed — and they were many and trusted and valued. At various times, she served as secretary to Director Burton Rogers, a Community School teacher, Principal and later as Interim Director of the Settlement School. She was frequently asked to assist with other administrative duties. Even in retirement, she was frequently called upon for assistance. Her contributions as a PMSS Board Member were consequential and wise.

She shared a deep friendship with Director Burton Rogers and his wife Mary Rogers that was enhanced by their shared Quaker faith and their extraordinary commitment to community service.

In 1973 she was elected to the PMSS Board of Trustees, where she again served several roles, including Recording Secretary for the Board’s meetings as well as a leader in several Committees such as the Board’s Planning Committee in the 1970s and the Community Resources and Services Committee in 2000. 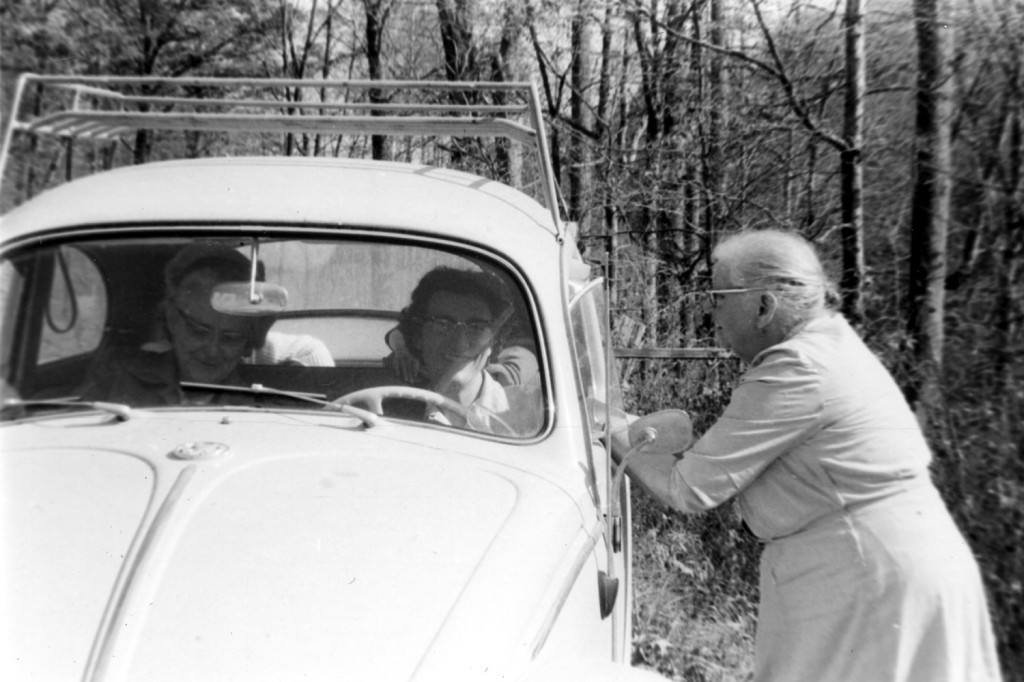 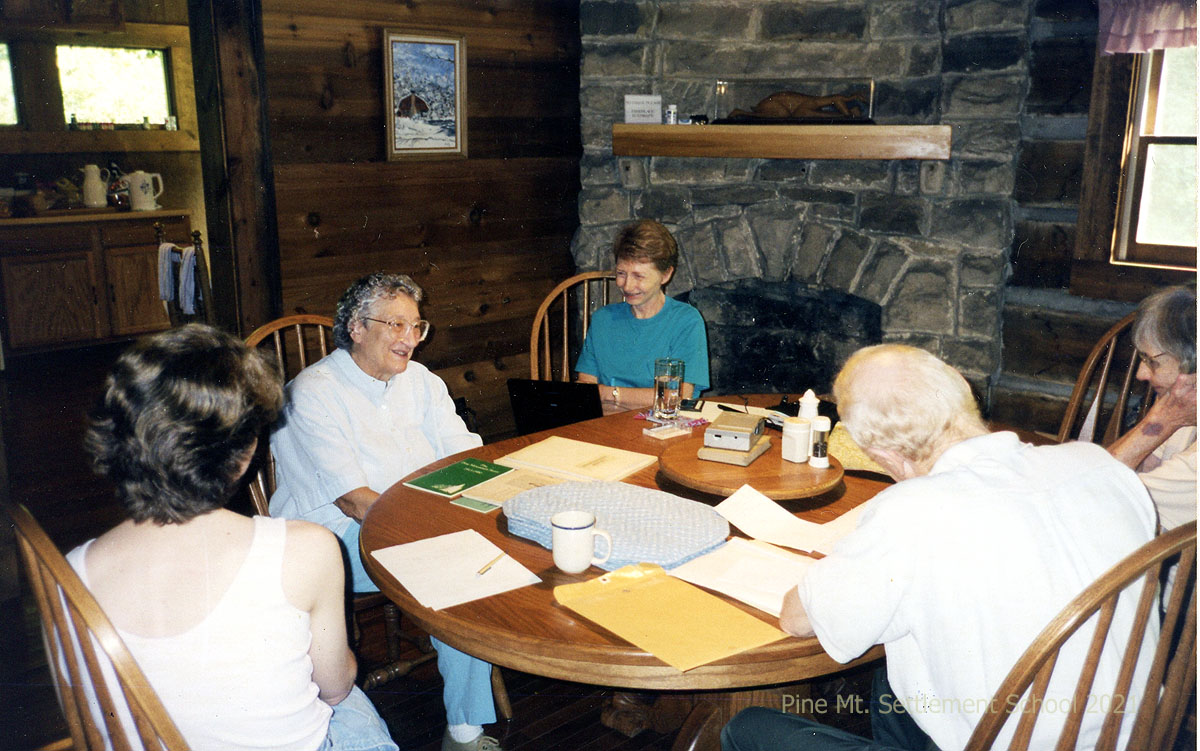 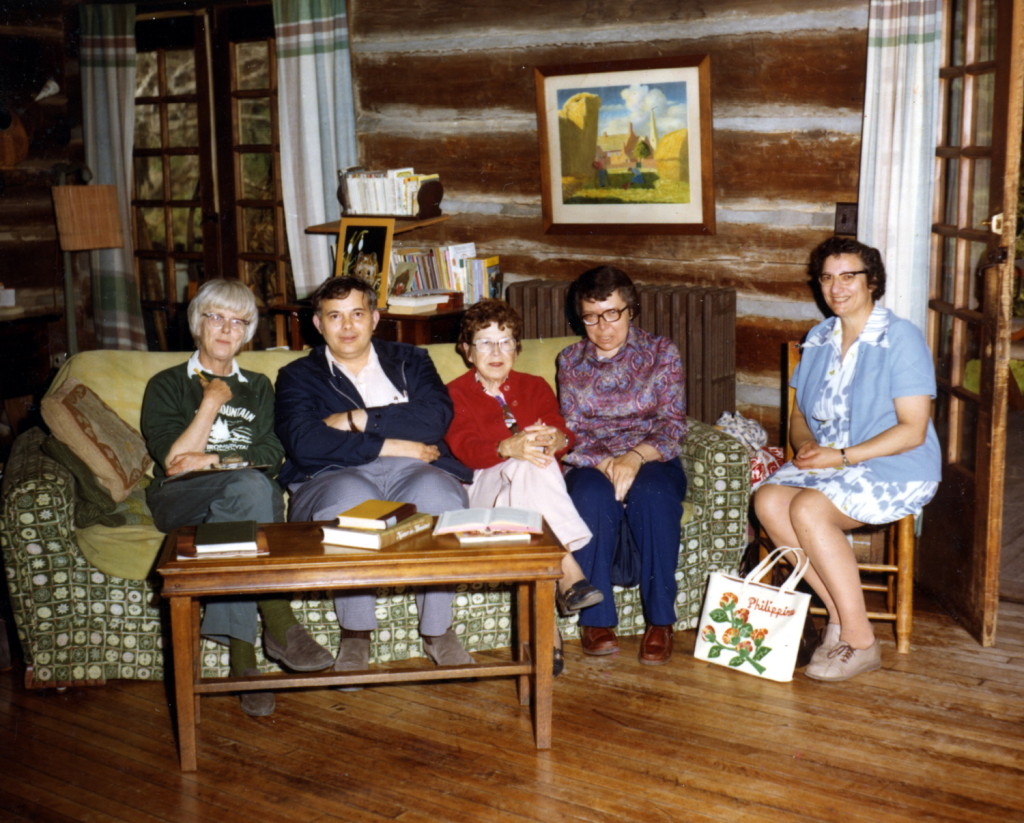 Milly Mahoney’s contributions to the education of pre-school children are ground-breaking. Her early work was a precursor of the national Head Start program and when the national program was under development she was invited to consult regarding the program she had started at Pine Mountain. Reporting to Burton Rogers in September of 1963, on her work with her “Little School” project she graciously gives credit to her colleagues while solidly backing her close observations with statistical data. It was her close attention to detail and to data that was important in formulating the National Head Start program as it showed where efforts fell short of expectation and where they excelled. Her careful assessment of the early childhood learning experience within the Pine Mountain Community brought her to the attention of the national Head Start planners who requested a report. She noted in her report:

Pine Mountain Settlement School has always been concerned with opportunity for the children of its area. The present program (as undertaken in 1940) has given priority to enlarging the educational opportunities of all the children in its immediate area by enriching and supplementing the public school program. That effort is now entering its fifteenth year. During that period well-trained, dedicated and hard-working staff members (both PMSS and public school) have used every resource available to contribute to the opportunities for these children.

… Exhibits of their work were arranged outdoors and at Laurel House. Most of their work has been filed in individual folders — a very interesting display, with growth evident in many instances. Although there was every encouragement for the development of skills, the program was completely creative. Children who preferred to spend part or all of the period playing with blocks were allowed to do so. It is my personal feeling that more than any other this period provided “opening” experiences of a type and caliber which could never be provided in our ordinary school set-up.

… Along with these accomplishments, there have been many disappointments and frustrations. With full appreciation of what has been done and of difficulties and limitations which have to be accepted, it often seems that the faculties and efforts which have gone into projects should have netted greater achievement.  …. For some time teachers at PM have felt the great handicap borne by many children who entered school unprepared in varying ways for the experience [of the classroom].

While Milly Mahoney many have been discouraged at times, keen observers recognized the important work that she and her staff were doing for rural education and education, generally. For example, Rebecca Caudill, a noted Appalachian author wrote of Milly and her program after a visit to the Little School in 1964

… As I think of the dedication of those teachers to their work, I find myself wishing that every child in the world might have early access to the wisdom, the strength, and the devotion such as these teachers possess. I wish they might have access to the unique teaching skills such as these teachers have developed; to their understanding of children of the ways that children grow mentally and physically, and of the learning process; to their appreciation of personality and of character; to their ability to use in their teaching whatever is at hand; to their enthusiastic cooperation in the carrying out of an educational program; and to their continual striving for individual development on the part of every child.

She notes especially the leadership Milly gave to the program.

… Milly’s ability to map long-range plans and to inspire those working with her to travel the long, often discouraging, often difficult road to the fullest possible development of each child…I do not expect to see the like of this staff again soon.

In the mid-2000’s, under the direction of Dr. Sky Marietta, a Yale-educated teacher, and wife of then PMSS Director Geoff Marietta, Pine Mountain re-instituted Little School. With the new dedication of the Little School leader, Sky Marietta, the program grew again at the Settlement.  Rebecca Caudill would no doubt be encouraged to write again about the enchantment of educating, the devotion and the genius of bringing forward the “latent abilities” of students and the dedication of volunteers and teachers, as the program brought in parents, staff, and new interest in early childhood education. Caudill might again say, as she did in 1964, that

…Though it is difficult to estimate the extent of the value of Little School, it is easy to see that the values are real and important and lasting. …. The children attending Pine Mountain Little School have a head start on mountain children for whom this luxury is not available. They are wisely prepared for real school. It is not too much to hope and expect that in due time they will help to bring up the average of high school graduates from the mountain counties so that it more nearly approximates the national average. What is of greater importance is that in their tender years they are learning to walk alone toward the goal of integrated, capable, creative personalities in a society where character and ability are greatly needed.

Although she left Pine Mountain Settlement School in the early 1990s, Milly returned in 1993 as a general volunteer to assist Pine Mountain during a particularly difficult time in its history.

When Paul Hayes, the School’s director for ten years, fell ill and died in October 1996, Milly was again called upon to serve as acting (interim) director. After Robin Lambert began as the new Settlement School director in August 1997, Milly assisted with her transition and provided support to Lambert throughout her two-year directorship.

From 1997 until her retirement approximately three years later, Milly worked as a full-time volunteer in other positions as well, such as coordinator for the Intervention Program, tutor, manager of the PMSS Archives, and hostess in the West Wind Dormitory. Her valuable assistance with other projects included reorganizing the Pine Mountain library, computerizing the card catalog, and working with the local Oral History project.

After Mildred Mahoney retired to Richmond, Indiana, she continued to provide counsel as a trustee on the Pine Mountain Settlement School Board and later as honorary trustee and secretary emeritus. She also traveled with other friends of Pine Mountain as a good-will ambassador and fund-raiser.

The School and community celebrated Milly’s contributions by designating May 20, 2001, as Mildred Mahoney Day, and marking it with a community potluck dinner and gospel singing in the Chapel. As described in the Summer 2001 issue of Notes from the Pine Mountain Settlement School,

Her work, dedication, intelligence, quiet spirit, and genuine love for the School and community have made Milly one of the most beloved individuals associated with Pine Mountain…. Her influence and the example of her life will shine a light our way for years to come. 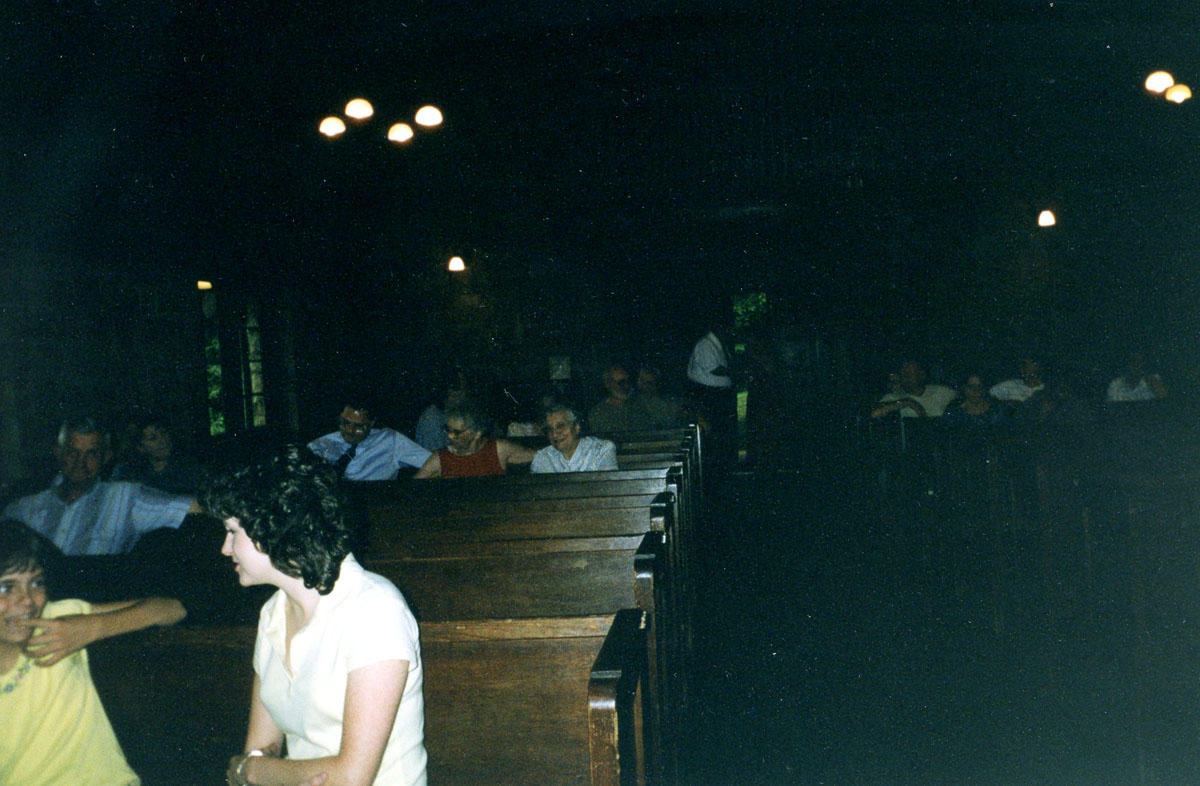 Milly was born on October 29, 1924, in Indiana to Carl and Edna Mahoney. She graduated from Mentone (Indiana) High School in 1941 and Manchester College (North Manchester, Indiana) in 1945 with a B.S. in Elementary Education and a minor in English. In 1950 she received an M.A. in Social Science from the Department of Education at the University of Chicago.

Before Milly came to Pine Mountain in 1953, she had spent several years teaching first and second grades at various schools in Indiana and serving in the International Voluntary Work Camp Program (sponsored by the American Friends Service Committee) in Philadelphia.

During her years from 1956 through 1964 at Pine Mountain, Milly spent part of that time teaching at other institutions. She worked in the summer of 1956 as an instructor of Reading and Science at Manchester College and part-time instructor of Human Development and Curriculum at University of Kentucky Southeast Community College in Cumberland, Kentucky, in 1963 -1964.

In 1965, Milly was a staff member of the Head Start Training Programs at the University of Kentucky and Eastern Kentucky University and served as a consultant for Harlan County’s Head Start Program.

Milly Mahoney died in Noblesville, Indiana on June 13, 2016, of complications associated with Alzheimer’s disease. That was another battle she would have gladly fought for others in the last years of her life, had she been able to do so.