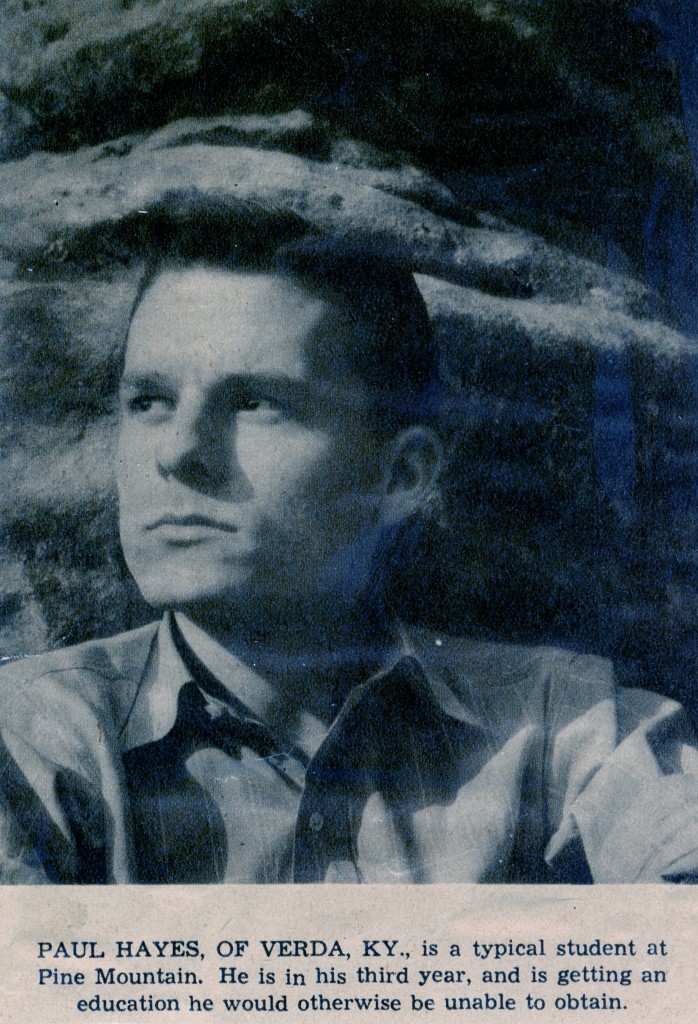 Pine Mountain must have seemed a pristine and delightful place to Paul Hayes whenever he visited his older brothers, John and Silvan, and later Bill Hayes who were students at the Settlement School. Those times inspired him to later state that he “had a love affair with PMSS ever since the age of 12.”

The Fall 1996 issue of Notes from the Pine Mountain Settlement School was dedicated to Paul Hayes. In it, Mildred Mahoney (acting director who succeeded Paul Hayes) included Paul’s fond memory of one of his early visits:

As a young child, Paul Hayes came over Pine Mountain, with his mother, on the logging railroad, for a special event — Pine Mountain Fair Day, memorable because Paul had his first ice cream cone.

Hayes spent his boyhood in Coxton (Harlan County), Kentucky, where he attended the coal camp elementary school. When Paul began seventh grade at PMSS in 1936, he joined his brother, William Hayes, who was already attending the School. Paul wrote in the April 1989 issue of Notes from the Pine Mountain Settlement School:

Coming from the drab and oppressive coal camps to this unique and beautiful setting, being a part of the special curricula designed by Mr. [Glyn] Morris and his talented staff, was a haven.

Later in life, Paul spoke of his PMSS education as “…the greatest thing, really, that ever happened to me” because the variety of jobs the students performed gave them “confidence that you were capable of doing any type of thing that you really wanted to do.” 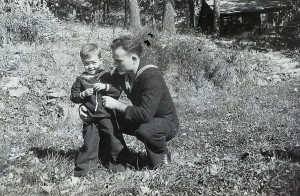 Paul’s graduation from PMSS high school in 1940 coincided with the heating up of World War II. As the United States began to greatly increase its Navy after Germany captured Paris, France, Paul joined a Navy V-12 Unit. Through the V-12 program, he received training both at Berea (Kentucky) College, and Duke University in Durham, North Carolina, followed by service on a PT (Patrol Torpedo) Boat in the area of the Caribbean.

Paul next returned to the PMSS campus on the occasion of his marriage in the PMSS Chapel to Ellen (“Mattie”) Ayers Hayes on May 30, 1946. Ellen, a Berea College graduate, was, like Paul, a native of Harlan County (Twila) and a former student at PMSS. She was one of six sisters who attended the school.

Throughout the years following their marriage, Paul and Ellen raised their family, owned and operated a music store in Bristol, Tennessee, and helped start a Presbyterian Church “which became basically a university church.” Throughout these years, Paul stayed involved with PMSS and helped to institute an active alumni association to support the School. 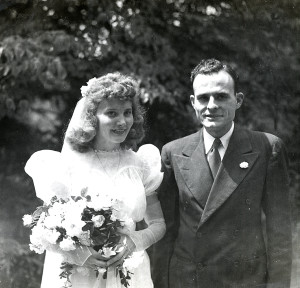 Paul Hayes was already retired and still living in Bristol when, in September 1986, he was offered the position of interim director at Pine Mountain Settlement School to replace former Director James Urquhart.

Mildred Mahoney described Paul as an appropriate selection for Pine Mountain at that time:

When he accepted the PMSS position, Paul took a leave of absence from his job of eight years as a carillon consultant for companies based in California and overseas in England. Originally agreeing to stay at PMSS for six months, Paul and Ellen realized that they could benefit the School by remaining longer. In the end, Paul served as director for 10 years. 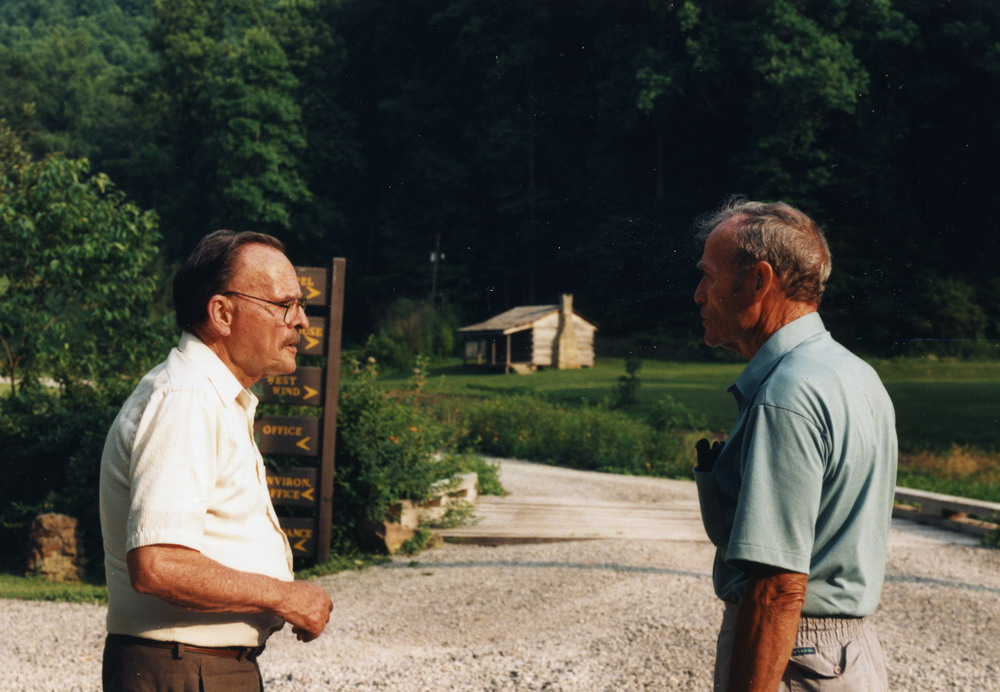 Paul Hayes and his brother, William Hayes, to right. [hay0261] 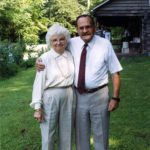 Paul’s most formative educational years at Pine Mountain were during the tenure of Glyn Morris, Director. In the April 1989 issue of PMSS Notes, he stated the following:

We walk in the steps of Mr. [Glyn] Morris. His ideals guide us as we follow along, ever seeking to make the programs and activity here a reflection of what he taught us.

Under Hayes, PMSS concentrated much effort on dropout prevention. The school employed retired teachers who visited public schools to tutor students who were behind in reading and writing skills, as well as gifted children. PMSS also uses its lush and expansive campus for an environmental education program not offered by any other institution.

In addition to teaching in the environmental education program at the School, Paul’s wife Ellen created an Intervention Program, employing retired teachers who went into elementary schools in local counties to help at-risk children. This program was later adopted by the State of Kentucky as an after-school program.

These accomplishments were included in a tribute to Paul Hayes, written by James Greene III, a PMSS Trustee, in the 1996 dedication issue of Notes. Also, Dr. Greene credited Paul Hayes for rebuilding and restoring of the aging campus infrastructure, stabilizing the School’s financial position, and restoring ties with the community.

The phrase, “In the Spirit of Pine Mountain,” became a familiar signature of Director Paul Hayes and continues to resonate with those who know the school and the work of this dedicated leader.

Paul Hayes was born in October 1922 and died of cancer in October 1996 in his 10th year as Director of the Pine Mountain Settlement School. 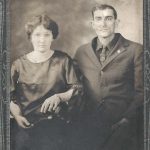 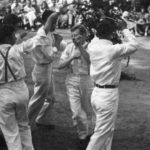 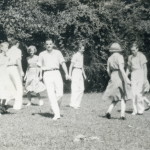 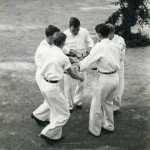 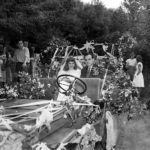 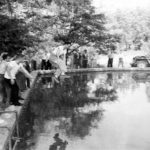 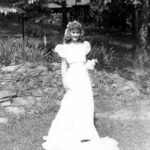 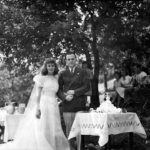 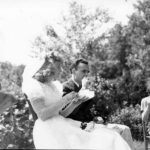 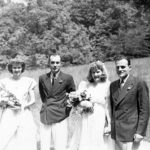 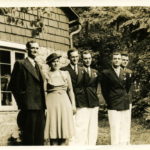 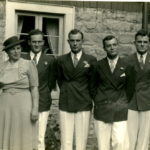 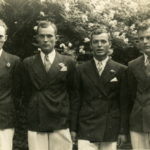 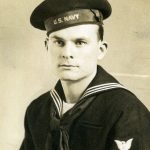 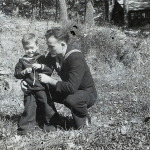 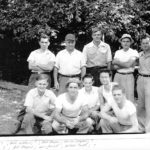 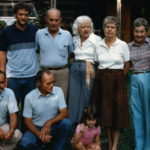 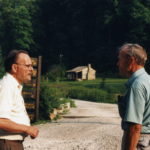