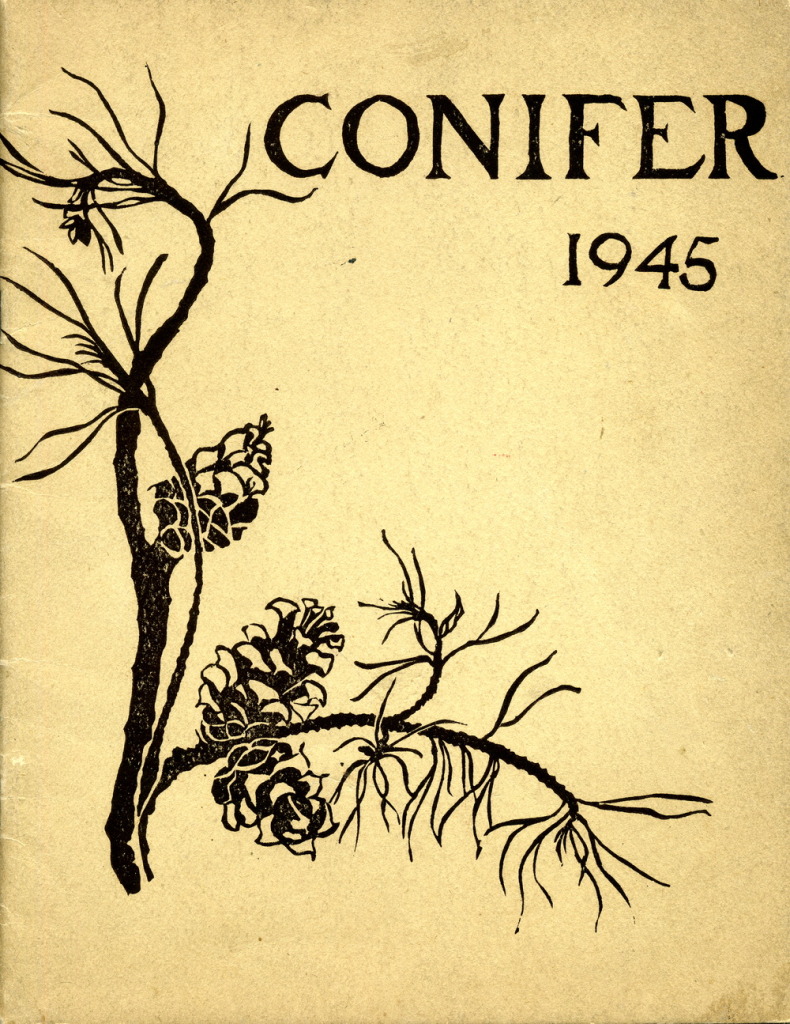 The PUBLICATIONS GUIDE PINE MOUNTAIN is an index to serial and non-periodic literature by PMSS trustees, workers and students. Most of the titles are linked to pages about the publications which can be found on the PMSS Collections website.

Experiences in Consumer Cooperation at PMSS, 1940-41

Consumers’ Cooperative Store – History of COOP by Class of 1938-39

The History of the Pine Mountain Settlement School: The Clothing of an Idea with Substance

NONESUCH – Intended as a one-time newsletter (December 1939) Printed one-time only by students as an alternative to Pine Cone.

PMSS Workbook for Students of Printing

Publications produced by Pine Mountain Settlement School comprise a very rich and diverse body of work.Using their own printing presses the School during the Boarding School years could repeat serial publications and other materials that reduced the costs to the School.  This body of work included such publications as  LETTERS TO THE BOARD, ADVISORY & FRIENDS, CATALOGS, BULLETINS, CALENDARS, NOTES FROM THE PINE MOUNTAIN SETTLEMENT SCHOOL, PINE CONE, CONIFER, and other periodicals and serial printed materials. Pine Mountain in the early years had an extensive mailing list and the School relied on its outreach for donations and other forms of support. With a ready workforce of students, the in-house printing both educated students and provided inexpensive promotional materials and inexpensive internal printing.

The literary publications of students, such as PINE CONE and CONIFER, were intended to support the educational programs of the Pine Mountain School community. This material, largely printed during the Boarding School years of the 1930s and 1940s, represents a very active phase of the School’s evolution and the body of literature captures the life of students and staff. The NOTES FROM THE PINE MOUNTAIN SETTLEMENT SCHOOL continue to be written, printed, and mailed to friends of the School and contain a cross-section of life at the School for over 100 years of the Institution’s history.

Publications associated with programs at the School that have no periodic publication are generally referred to as “ephemera.” E-fem-er-a is a genre of publication that is understood to have a short life and is not published periodically. For example, the educational material prepared for the RURAL YOUTH GUIDANCE INSTITUTE, conducted during Director Glyn Morris‘s years and after, form a large body of material on progressive education from the 1930s through the early 1950s. This body of material is of particular interest to educators and varies from year to year. See PUBLICATIONS PMSS EPHEMERA AND SMALL PUBLICATIONS Guide for a listing of ephemera and small-run publications.

The POLICIES AND PROCEDURES manuals of the institution are also interesting as they chart the many changes in both local and national culture and patterns of religious belief and politics In the region. However, they were not produced annually and varied in content as the School grew and changed. The CO-OP literature is a valuable record of service-learning and industrial training and outlines the operations of the cooperative store that was an integral part of the educational program of the Boarding School.

Considerable ephemeral literature provides information on the non-sectarian Chapel and Vesper services, the Nativity Play, May Day, Fair Day, Dogwood Breakfast, the more recent Lucy Braun workshops, and many other community workshops and environmental program events and craft workshops. While some of these publications could be considered periodical, they often were very dissimilar depending on the administration of the School.

The creation of a print shop in the early 1930s allowed Pine Mountain to professionally print its own material on site. For most of the years until the mid-1930s, the promotional literature and materials intended for distribution to the public were printed through commercial companies. A history of the print shop can be found in PRINT SHOP and through the biographies of those closely associated with printmaking at the School. For example, the biographies of AUGUST ANGEL and FRED J. BURKHARD contain much history on the early development of printing at the School.

The location of a print shop on campus allowed the School to also provide services for the community and to charge fees for service which brought some revenue to the School. The NOTES FROM THE PINE MOUNTAIN SETTLEMENT SCHOOL benefited substantially from the print shop and the improved controls over their publication processes, but it was the student-run newspapers, the PINE CONE, and the CONIFER, that fully engaged the student printers, editors, and writers. The NOTES and the student publications could all be quickly moved from the writing to the editing to printed copy and at a reduced cost in both time and money.

Communication with an extensive mailing list and donor list was and is critical to the welfare of the institution. There were many good communicators at the School and there were many very good writers at Pine Mountain throughout its history. Evidence of the skill of writers such as Ethel de Long [Zande], Marguerite Butler, Angela Melville, Alice Cobb, Elizabeth Hench, Margaret Motter, and Evelyn K, Wells abounds in the institutional records. 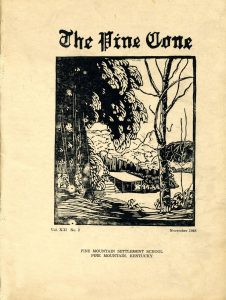 Some of the most creative writing is found in The Pine Cone and its companion, Conifer. In these two publications the originality and deep perception of many of the students, shine.  Here, also, is a richly rewarding field of social commentary. Particularly revealing is the frequent exploration of the darker side of human nature or the tangled web of familial relationships that continues to populate the contemporary fiction of Appalachia.

Poetry or prose, the students left echoes of their younger selves that while regional in many ways also speaks to the inner self of the late adolescent on the cusp of adulthood.

The commitment of the School to the challenges of literacy in the Southern Appalachians is still seen in the programming of the School. The SUMMER READING CAMP, held for one week in the summer, is a collaborative program of the School and the Episcopal Diocese of Lexington and Christ Church in Harlan to bring a residential Reading Camp to the Settlement School. The students are identified based on recommendations or on need, and application to the program and funding is determined by donations of money and time by several organizations. The program is described as follows:

The camp is for rising fourth and fifth-grade students who need individual instruction to help them master basic reading skills. Reading Camp is funded in part by the Episcopal Diocese of Lexington, the Berea College Appalachian Fund, the Glenna Rice Reading Camp Fund, individual contributors, and foundation sources.

A recent video produced by the Episcopal Diocese may be found here:

Among the Southern Appalachian Settlement Schools, Pine Mountain and Hindman have shared a common commitment and recognition for their literacy programs. The selections in this website provide evidence of this educational commitment of Pine Mountain School and give testimony to the impact the School has made and is making in the area of literacy education. 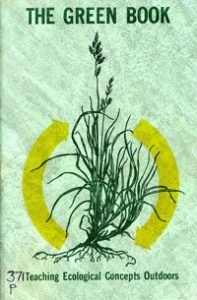 Various guides and manuals of practice were published for the Environmental Education programs created in the early 1970s and based on ideas generated by Mary Rogers and many others. As the program evolved the literature reflected the emphasis on thoughtful programming and experienced leadership. The Green Book was widely distributed in the early years of outdoor educational programming when Pine Mountain led the state of Kentucky in the development of environmental education.

THE GREEN BOOK is a sequence of 12 sample lesson plans, each with background information preceding it. The lesson plans can be adapted to use with elementary, secondary, and older students. At the end of the guide is a supplementary reading list and some additional ways in which the immediate school environment can be used to study the way people relate to their surroundings.

Environmental education has come to mean many different things. Sometimes, unfortunately, it has involved a separation of two kinds of learning: the learning of awareness and appreciation through the use of the senses; the learning of knowledge — specific truths — through experimentation.

We hope through this guide to help bring the two areas together and to stimulate the learning of additional skills such as that of effective communication. Through ecological concepts, one realizes that “awareness” is necessary not only for aesthetic appreciation but also for the understanding of concrete situations.

Throughout the eras, one of the educational strengths of the School has been it promotion of   HEALTH LITERACY. The narrative reports of the workers in the two settlement extensions of Big Laurel Medical Settlement and the Line Fork Settlement and in the associated writing of most of the workers at these two satellite settlements, particularly the extensive reports of DR. IDA STAPLETON and her husband, the Reverend Robert Stapleton, are rich in anecdotal and clinical instructional detail. The reports of ELIZABETH G. SMITH, MABEL MUMFORD, RUTH DENNIS and others, capture a variety of writing styles and perspectives on health care in the eastern Kentucky mountains and have been gathered under the individual creators and are not considered in the genre of the ephemeral publication.

During the first two decades, the programs at Big Laurel and at Line Fork were supported by the administration of Pine Mountain and later through cooperative programs with state-funded health programs in Harlan and Letcher counties. During this quasi-independent period, Pine Mountain assisted with the promotional literature of the two entities but often separate brochures were prepared for the two satellite communities.

By opening this digital window to the formation and growth of one of the many regional settlement schools, its students and its leadership, and its friends and enemies, it is hoped that the diversity of the region will be easier to explore and that the layers of relationships can be intelligently peeled back to reveal the many facets of all our lives.