TAGS: publications by PMSS, PMSS calendars, fundraising, reflections on the meaning of “time,” links to pages with images of calendars

Among the many publications of Pine Mountain Settlement School is an array of calendars. The first calendar, published in 1914, was used as part of the fundraising campaign of the institution. The idea was a simple one that bound the promise of the new school to a future measured by the march of time. 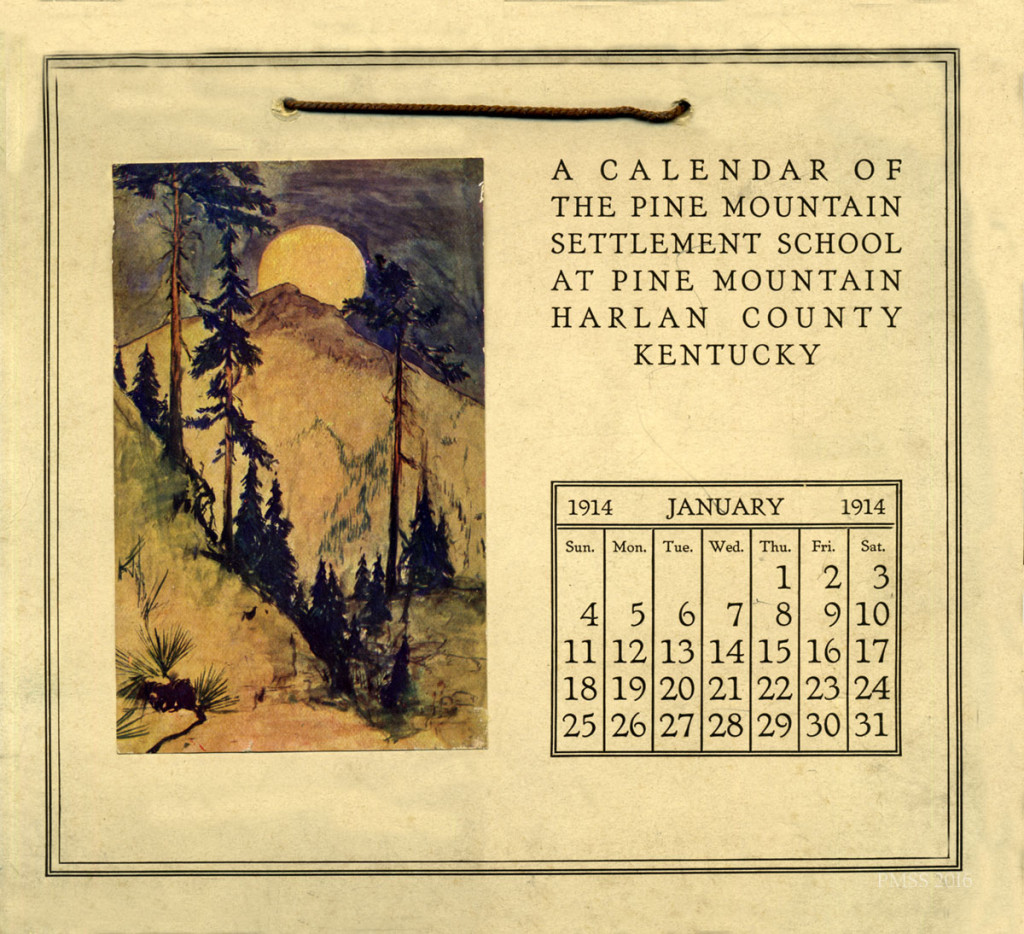 It is not surprising that the sensitive Ethel de Long, co-director of the new settlement school would settle on this instrument of months and weeks and days to measure the School’s progress through time and to aim for its future.

The writer Jorge Luis Borges spoke to the compelling nature of time when in 1946 he commented in his essay A New Refutation of Time (1946, revised 1947)

Today time is ever more compelling as new science digs deeply into time and asks us all to reflect on “what makes it tick?” Carlo Rovelli’s The Order of Time (2017) and James Gleick’s Time Travel (2016) are two more writings among the many that have taken on the challenge of exploring that most elusive and pervasive element of our existence … time.

In their singularity, so to speak, calendars provide a thread that weaves together that elusive time. Calendars are knots in the thread that tie us to past and present. They measure our distance from the past as they measure our journey to our future. The writer Ursula Le Guin made note of the passage of time in this stanza from her short poem Hymn to Time, written just prior to her death in 2018:

Time makes room
for going and coming home
and in time’s womb
begins all ending.

In some ways, calendars are mind traps. They capture the arrows of time from year to year that mark our experiences. But, as James Gleick tells us, those experiences are only in our minds. It is the mind that does the experiencing and it is in the mind that

…we experience most immediately [and our mind] … is subject to the arrow of time. It creates memories as it goes. It models the world and continually compares these models with their predecessors. Whatever consciousness will turn out to be, it is not a moving flashlight illuminating successive slices of the four-dimensional space-time continuum. It is a dynamical system, occurring in time, evolving in time, able to absorb bits of information from the past and process them, and able as well to create anticipation for the future.

Taken as a whole the calendars of Pine Mountain create memories of place and imaginations of futures. The calendars are arrows to past, and to future. And, most importantly, calendars capture in the now, a range of personal viewpoints as each calendar creator and viewer aims their own “arrow of time.”