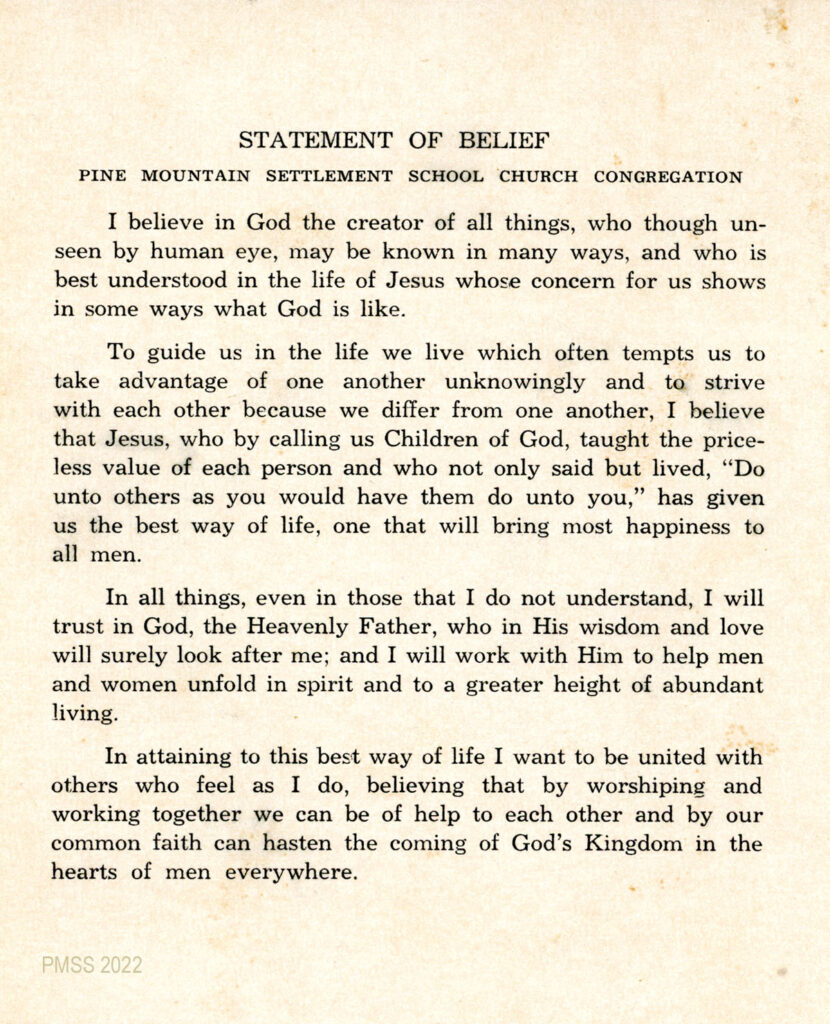 The peoples who settled the Central Appalachians were a deeply religious and a doggedly independent people, and they largely remain so today. The settlement workers who came to work with this diverse population in the first quarter of the twentieth century found a population which often had roots in deeply fundamental religious practice and beliefs. The workers of the School came from diverse religious backgrounds but were largely Protestant in their belief systems.

Several of the Directors of the School were ministers and largely Protestant in faith, as were most of the Workers at the School.  Glyn Morris, a graduate of Union Theological School in N.Y.C. and  Alvin Boggs, was a Wesley Evangelical Church of North America minister and later a founder and former administrator of Living Waters Christian School just outside the PMSS campus at Pine Mountain, a private Christian elementary school. Other Directors came to Pine Mountain through various church affiliations. For example,  H.R.S Benjamin,  came through his work with the American Baptist Foreign Mission Society in China where he was instrumental in helping to establish a School in Ningpo, East China that joined a Northern Presbyterian school and an English Presbyterian school to form a strong educational center before the fall to the Communists. He continued a lifetime of association with the Baptist denomination.

Other staff, such as the Rev. Robert Stapleton, husband of Dr. Ida Stapleton at Line Fork Settlement, a satellite of Pine Mountain and the Rev. Richard Baker, who succeeded the Stapletons in 1937 also at the Linefork Settlement, were ministers who have left their mark on the religious life of the School. Rev. Richard Baker, appointed by Glyn Morris, a Presbyterian, retired as a minister of the Presbytery of Giddings-Lovejoy in Rolla, Missouri, a Presbyterian church. Many staff had a relationship with the Congregationalist Church and many served abroad as part of their careers.  Also, those associated with the Presbyterian Church were in high number on the Staff.

Edith Cold had a remarkable life and religious affiliation.  Born into a Quaker family, she applied as a Mennonite for placement with the Brethren (Mennonite Church) in Hadjin and Adana, Turkey, serving with the Congregationalist Church through ABCFM (American Board of Commissioners of Foreign Missionaries). As a Brethren, she was good friends with the missionaries from the United Orphanage and Mission who represented Mennonites, the Missionary Church, and Mennonite Brethren in Christ. Her sister Bertha Cold also worked at Pine Mountain School.  A number of other staff women and men had ties to the Congregationalist Church and served abroad. Other women and men found their way to the School through a variety of church contacts. Mary Rogers born in Greenham England in Berkshire County was the daughter of the local vicar. Through the  Church of England and she spent time in India working with Ghandi in the early years of her life. Burton Rogers, a PMSS Director and a Yale graduate worked in China with the Yale in China Program until the Japanese Invasion in 1937. Mary Rogers and Burton Rogers were regular participants in a Quaker church in Lexington later in their lives and maintained a long-standing relationship with the Quaker faith.

The religious practice in the broader community was diverse and eclectic and any discussion of beliefs was sure to call up deeply embedded religious ideas and convictions. Conversations often marked the individual as a sincere and steadfast holder of his/her convictions.  Deeply held beliefs, as well as outspoken convictions, were broadly respected within the Pine Mountain institution and largely within the community it served.

The religious beliefs of Katherine Pettit are difficult to isolate as are those of her Co-founder, Ethel de Long Zande though there is no doubt as to their sincere and deeply held Christian convictions. The Workers who came to Pine Mountain in the early years had varying ideologies and religious convictions and all were discouraged from any proselytizing actions.  Many of the staff had been part of Congregationalist missionary ventures and many returned to that field upon leaving Pine Mountain. Some Workers came as Presbyterians and left as Quakers. Some came with strong sectarian religious beliefs and were left questioning their belief systems.

The literature of the Settlement School is replete with religious statements, but rarely with declarations of or demands for adherence to a singular denomination.  Holiness, Presbyterian, Methodist, Evangelical United Brethren, Congregationalist, Catholic, Quaker Congregation, Episcopalian, Baptist, and a myriad of hybrid religious congregants put aside their fundamental belief system for the greater belief in a common destiny in God’s Kingdom.

The fundamental belief system that is deeply rooted in the Pine Mountain Settlement School as an institution, is that declared first by William Creech who donated the primary tract of land for the School.  Uncle Williams Reasons continues to be the North Star for those seeking an institutional statement on religion and the conduct of one’s belief system. Almost a Declaration of Independence, Uncle William’s Reasons for the Pine Mountain Settlement School have been edited over the years but the fundamental message is one of educated respect for the beliefs of everyone.

I don’t look after wealth for them. I look after the prosperity of our nation. I want all younguns taught to serve the livin’ God. Of course, they wont all do that, but they can have good and evil laid before them and they can choose which they will. I have heart and craving that our people may grow better. I have deeded my land to the Pine Mountain Settlement School to be used for school purposes as long as the Constitution of the United States stands. Hopin’ it may make a bright and intelligent people after I’m dead and gone.

Morris championed the development of the individual while insisting on a community consciousness, removing the “tight places” that administrators often find themselves by sharing the responsiblity of administering behavioral issues with a student committee.