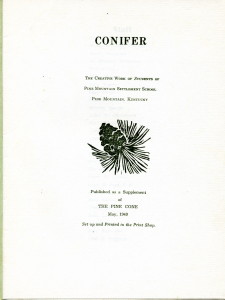 The GUIDE TO PUBLICATIONS BY PMSS is extensive and is comprised of DEAR FRIEND LETTERS, CATALOGS, CALENDARS, the annual NOTES mailed to a large mailing list, the literary publications of students such as PINE CONE and CONIFER, and various routine and special events literature.

The GUIDE TO PUBLICATIONS RELATED TO PMSS is also extensive and includes books, periodicals, ephemera, newspaper clippings and broadsides, and now is inclusive of multi-media. There are many instances of material that were saved by staff as “of interest” to the school. This saved material provides an opportunity to see what workers found useful or of interest in their work at the institution and creates a context for researchers.

The publications of Pine Mountain Settlement School related to the RURAL YOUTH GUIDANCE INSTITUTES held at the school during the 1930s and 1940s is of particular interest to educators. A GUIDE to Rural Youth Guidance Institutes. Policy and procedure manuals are also interesting as they chart the many changes in both local and national culture, and patterns of religious belief and politics In the region.

The creation of a PRINT SHOP in 1934 allowed Pine Mountain to professionally print material for the institution on site. For most of the early years all promotional literature and material intended for distribution to the public was printed off site. A manual for workers in the Print Shop was prepared by August Angel, who headed the operation of the shop and guided its success for many years. When the print shop was established and staffed it also provided Industrial training for the students at the School. Students in the Boarding School became accomplished in setting type and developing layout and the many other skills associated with the occupation of printing. Many carried those skills into careers. The location of a print shop on campus allowed the school to also provide services for the community and to charge fees for service.

The annual publication of the NOTES FROM THE PINE MOUNTAIN SETTLEMENT SCHOOL (NOTES, for short) benefited substantially from the print shop and improved controls over their publication processes. Printed annually, the NOTES could be more quickly moved from the edit to printed copy at reduced costs. Communication using an extensive mailing list and donor list was and is critical to the welfare of the institution.

There were many good communicators at the school and there were many very good writers at Pine Mountain throughout its history. Evidence of the skill of writers such as Ethel de Long, Angela Melville, Alice Cobb, Elizabeth Hench and Evelyn Wells abounds in the institutional record. Students during the boarding school era also often showed special talent at writing. Selections from the student newspapers, the PINE CONE, and from the CONIFER, a literary publication by students during the late 1930s and the 1940s, are particularly noteworthy.

The commitment of the school to the challenges of literacy in the Southern Appalachians is still seen in the programming of the school. The SUMMER READING CAMP, held for one week in the summer, is a collaborative program of the School and the Episcopal Diocese of Lexington and Christ Church in Harlan to bring a residential Reading Camp to the Settlement School. The students are identified based on recommendations, or on need and application to the program, and are funded through several organizations. The program is described as follows:

The camp is for rising fourth and fifth-grade students who need individual instruction to help them master basic reading skills. Reading Camp is funded in part by the Episcopal Diocese of Lexington, the Berea College Appalachian Fund, the Glenna Rice Reading Camp Fund, individual contributors, and foundation sources.

Among the Southern Appalachian settlement schools, Pine Mountain has been recognized throughout its history for its commitment to literacy education, as well as industrial education. The selections in this web offering provide evidence of this educational commitment and give testimony to the impact the school has made and continues to make in these areas.