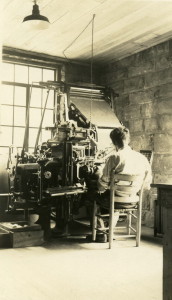 During the boarding school years, Glyn Morris (Director, 1931-1942) and his staff envisioned a school program that would provide both industrial and academic training. High school students would select their course of study based in industrial arts which would teach them a trade for future employment or to follow a course of study that would prepare them for college.

To expand the School’s industrial arts curriculum, a print shop was proposed by Morris for the campus, knowing that such an enterprise would not only provide students with a trade but also benefit the School financially as well. No longer would the School have to pay an outside company for its many and various printing needs or relinquish control of the publication process to that company. In addition, a shop on campus would provide printing services for the community and bring some revenue to the School.

The October 1932 issue of Notes from the Pine Mountain Settlement School mentions the first acquisition of equipment for a print shop: “With a view to vocational training we have secured a small six-by-ten hand printing press, and a few fonts of type.”

In 1934, Glyn Morris set up the campus’ first print shop in the Office building with the assistance of the science teacher, August Angel. For the next three years, Angel served in the busy little Shop as teacher of printing, a skill that he had studied during his years at West Technical High School in Cleveland, Ohio, then Miami (Ohio) University. The students became accomplished at setting type, developing layout and many other skills associated with the occupation of printing and publishing, including the management of a printing operation. August Angel wrote of his print shop experience at Pine Mountain in his memoir, Trivia & Me:

In the first printing class, the boys’ faces beamed with pleasure at a finished job — whether it was a name card, letterhead, or school brochure. To produce a printed item, they would pick type out of the proper letter spaces of a California job case and then set the type, line by line, in a composing stick. Next, they assembled the lines and paragraphs into stories that were placed in a chase, ready for the treadled printing press. Thus, they were learning a trade and paying off their school debt at 5¢ an hour. The print shop was a novel and immediate success.

August Angel left the School in 1937 to teach at a Dayton, Ohio, high school, for three years. During August’s absence, his printing classes were turned over to Fred J. Burkhard.

By this time the student shop was moved to the Draper Industrial Building, which had recently been built to replace Boy’s Industrial Building that was destroyed by fire. In a letter to entice Burkhard to accept the position, dated July 13, 1937, Glyn Morris wrote:

We have an interesting school here. We are trying out a practical program in education. We have recently erected a new industrial building in which the print shop is located. It is equipped with two presses, paper cutter, Linotype machine and all of the other necessary implements which one would find in a small print shop. We are interested in doing a finer, artistic printing. 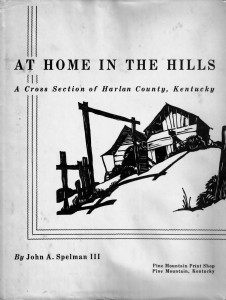 The letter was a success. Burkhard, a Berea College graduate, came to Pine Mountain in time to begin teaching classes in September 1937. During his time at Pine Mountain, Fred worked with artist John A. Spelman III to print, publish, and bind the first edition of At Home in the Hills, a book of Spelman’s linoleum cuts.

By the end of the 1940 term, Fred left the School to buy a weekly newspaper plant in Liberty, Kentucky, and publish the Casey County News. August returned to Pine Mountain to resume teaching and overseeing the student print shop.

In 1941, Glyn Morris arranged for August to attend the Keating School of Linotyping in Chicago, Illinois, for six weeks of training. The school was sponsored by the Mergenthaler Linotype Company. 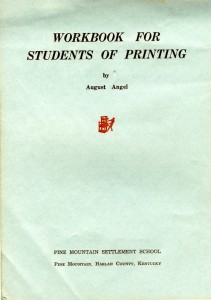 August’s printing lessons are detailed in the Workbook for Students of Printing that he wrote for the students, the images and transcriptions of which can be seen here.

The print shop provided all the printed material that was needed by the School, such as The Pine Cone and the Conifer, PMSS Catalog, Chapel programs, special event programs, bulletins, catalogs, staff and student stationery, office stationery, pads, business office materials, and Notes. Several books were also printed, including the aforementioned At Home in the Hills and the hand-bound book, A Pine Mountain Study in Civics, by Everett K. Wilson.

An article in the student publication, The Pine Cone (December 1940), also produced in the print shop, describes the shop from a student’s viewpoint:

Under the supervision of Mr. August Angel thirty students, twenty of them beginners at this trade, receive instructions in printing. The time is so planned that the students with a definite vocational interest in printing will receive the most training. A typical class period finds Oral Howard at the linotype setting up last minute PINE CONE copy while Bob Blanton is making up the pages. Willard Enix is running the big press and Ray Miller is working on the calendar.

The beginning students are setting type by hand from a California job case, the case most commonly used throughout the country. After the students have mastered the California job case and the composition projects that are required, they are then ready to make up forms and to do press work.

School jobs are steadily pouring into the print shop and this makes quite a lot of work for the boys that make up the forms and run the presses, but it is good experience. The larger jobs come in the fall of the year when the calendar and school notes are printed. This year 8,000 calendars were printed. The chapel program is printed each week.

“A Study in Civics” by E. K. Wilson, set up and printed by Pine Mountain students, was the first book to be printed in Harlan County. The second book to come from the Pine Mountain press was “At Home in the Hills” by John A. Spelman III. 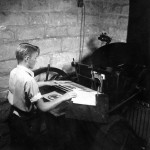 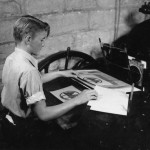 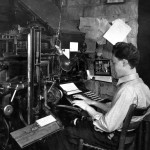 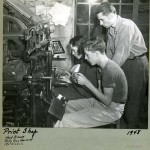 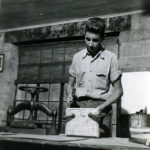 August left the School in 1943 for a position with the Civilian Conservation Corps and, soon after, for Europe to serve in World War II. A few years after his return from the war, he became owner of a print shop in Sharpsville, Pennsylvania, which he operated for approximately 15 years. In the 1960s, he and his wife, Susie Hall Angel, moved to Viper, Kentucky, where August owned a second print shop. He again became involved with the Pine Mountain School, printing for the School at cost, including the second edition in 1978 of At Home in the Hills, for a Pine Mountain fundraising effort.

The Pine Mountain print shop continued operating into the years of Burton Roger‘s directorship (1949-1973). In 1954 the Draper Building was converted to classroom space for the new Community School program and, according to a 1954 letter written by Gerna Campbell, principal of the Community School, the print shop was to be moved to the west basement of the Girl’s Industrial Building.

Eventually, the shop was dismantled and some of its equipment was sent to Berea College. At least two pieces of machinery, a papercutter and a press, have been stored, now covered in rust and cobwebs, in the Barn these many years. Yet the legacy of the print shop lived on in the many students who carried their printing skills into careers. And the shop’s publications that have been saved and stored in the PMSS Archives continue to preserve a slice of the Settlement School’s history

Return to BIOGRAPHY A – Z