Few photographs remain of this early building. The Boys Industrial, designed by Mary Rockwell Hook, did not have a long life. It was built in 1922 and burned to the ground thirteen years later in 1935.

While it was in existence, the building served a vital function in training students in practical skills such as woodworking, mechanical arts, design and drafting, surveying, etc. It was constructed to complement the Girls Industrial Building, built near the same time and just east of the Boys Industrial structure. The two industrial buildings both had a low functional profile with many windows and large classrooms to accommodate the hands-on work. 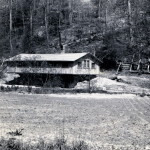 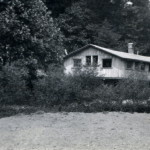 On December 22, 1935, the wooden building caught fire and burned not long after it was constructed. Along with the building, many tools, equipment, and classroom space were lost to the School when it burned.

The following is an account of the burning of the building. It is found in a letter to members of Delta Sigma, a men’s fraternity, who were hoped to be a donor in the replacement of the building. The letter written by Alice Cobb, a secretary for Glyn Morris, director of the School at the time the building burned, shows signs of possible dictation by Morris.

You have already heard, probably, about the disaster at Christmas time when our Boys Industrial Building was completely destroyed by fire. All the woodworking equipment as well as many finished pieces of furniture, were destroyed, and the school truck, parked down below was burned also. Mr. Morris is now working on the plans for a new building which we hope to be able to build within some reasonable time. This will be located on the old site but will be considerably larger, and will house the science departments as well as mechanics and woodworking. Of course, we are very badly crippled without our building and financially crushed by the loss which amounted after the insurance was collected to an amount approaching two thousand dollars.

The fire happened at one o’clock on the morning of December 22nd. Most of the students had left for the Christmas holidays, and only about fifteen girls and boys, and a few workers remained on the grounds. Fires were being kept in all the houses, to prevent the pipes from freezing, and the nightwatchman was going from house to house to check them. This fire must have burst out somehow just after he left the Boys’ building. We were wakened by three pistol shots (shots at night are a signal of fire) and by the time the boys came running down the hill from the Farm House, the whole valley was ablaze. Of course, there was no hope whatever of saving the building, and we turned our attention to making safe the other houses nearby, since there was a strong wind blowing, and tree tops were catching afire on the hill above the building. Fortunately the wind died down and the farm buildings which are directly above were unharmed.

There were many fortunate aspects — the chief of these being, of course, that most of the children were gone, so that there was no hysteria, and no lives were endangered. But it has been a sad time for us. Our mechanics department had to be given up entirely and the instructor went home soon after Christmas. The woodworking department is being carried on now in a makeshift shop in the basement of the houses, with scarcely any equipment.

As I said, the new plans are now taking form. The ‘pool room’ of Delta Sigma is to be one of the entrances to the new building and will be the center of the science laboratory work. It will be something like a conservatory, we think — but I can give you more detailed information about this when I write again. I hope some of you will come down and see the work begin as we hope it will, this summer.

The demise of the Boys Industrial allowed the construction of another more comprehensive industrial building, Draper Industrial Building, which was built in 1936 roughly on the same location. The Draper Building served as the Industrial Arts and Sciences building for the boarding school years. Today it is a center for the Environmental Education program at the School.