In 2001 a resolution that became HR 33 and called “Lands Unsuitable for Mining,” was drafted as a petition from Pine Mountain Settlement School to restrain surface mining on the lands surrounding the School.

The House Resolution #33 read as follows (from the unofficial copy of the Resolution).

A RESOLUTION in support of the Pine Mountain Settlement School.

WHEREAS, on November 13, 2000, the Pine Mountain Settlement School filed with the Kentucky Department for Surface Mining Reclamation and Enforcement, a petition to declare 5,226 acres of land surrounding the historic school as unsuitable for all types of coal mining operations; and

WHEREAS, the Pine Mountain Settlement School, located in Harlan County, is a National Historic Landmark that provides a unique resident outdoor environmental education experience to over 3,000 school children each year, and has been a cultural and educational resource and an employer to the community for over 85 years; and

WHEREAS, a proposed mountaintop mining operation on the Cumberland Plateau to the north of the school property could disrupt the mission, the historical setting, and the viability of the Pine Mountain Settlement School as a National Historic Landmark and outdoor education center; and

WHEREAS, the Board of Trustees of Pine Mountain Settlement School has filed a Lands Unsuitable for Surface Mining petition alleging that surface coal mining operations will affect historic and fragile lands and could result in significant damage to important historic, cultural, scientific, aesthetic values, natural systems, and spring-recharge areas on Pine Mountain that serve as a water supply for the school; and

WHEREAS, the House of Representatives expresses its deep concern regarding the damage coal mining may inflict on the Pine Mountain Settlement School and its rich cultural, historical, and natural heritage;

Be it resolved by the House of Representatives of the General Assembly of the Commonwealth of Kentucky:

Section 1. That Pine Mountain Settlement School has been a truly important Kentucky institution for thousands of students and community residents and others who have participated in its programs over many years.

Section 2. That the House of Representatives recognizes the importance of coal mining to the state and local economy, and the House also acknowledges the growing importance of protecting unique and special places like the Pine Mountain Settlement School.

Section 3. That a designation of the areas with coal reserves within the petition area as unsuitable for mining is appropriate in order to protect the long-term viability of the school, which has served as a cultural, educational, scientific, and historical resource for almost a century.

Section 4. That the Clerk of the House of Representatives shall transmit a copy of this Resolution to Governor Paul Patton and to Natural Resources and Environmental Protection Cabinet Secretary James E. Bickford. 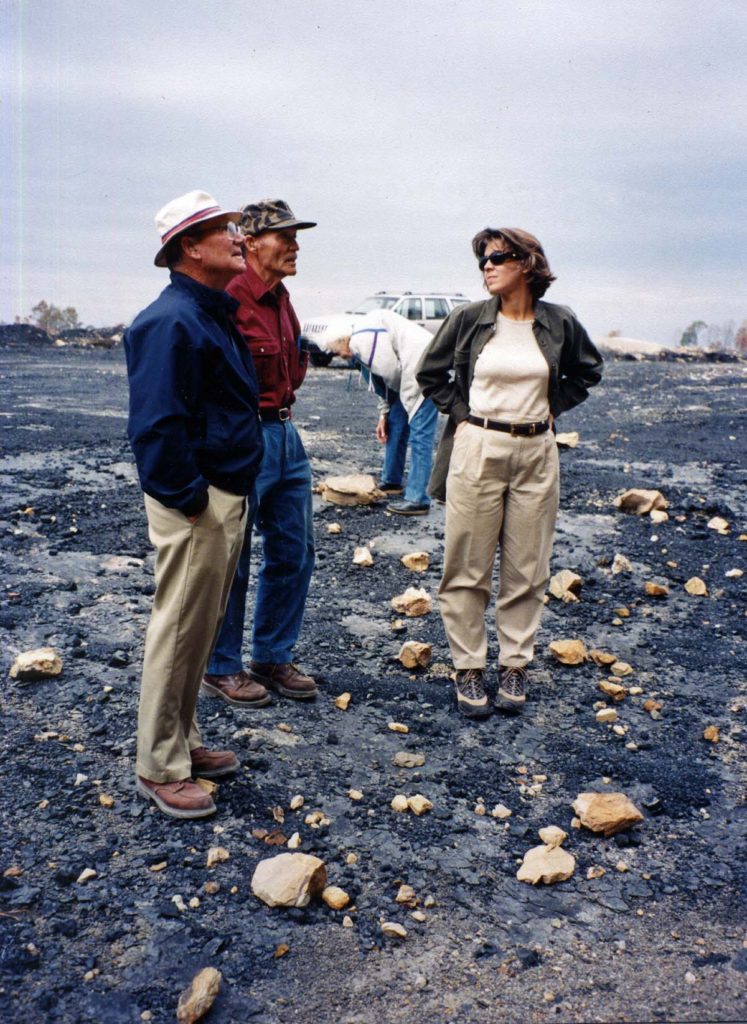 “Area stripping,” a practice used in Western Kentucky cuts long, deep trenches in a parallel pattern, to reach the coal beneath the flat land of the region leaving behind long parallel piles of “spoil” in the mining area. “Contour stripping,” is a mountain practice that first cuts a shelf or bench along the edge of a mountain above a coal seam and pushes the “overburden” over the slope of the mountain. The resulting “highwall” above the exposed coal seam can scar the face of a mountain or ring it completely, or create several “shelves” or “benches” as multiple coal seams are mined.

“Augering’ is a practice that can be used in combination with “Contour stripping” and is sometimes used to retrieve coal exposed deep in the mountain after the coal is removed from the shelf or bench. The auger operation produced deep (100-200 foot) auger holes that pull coal from the horizontal seam.

It did not take long before landowners, particularly those who had sold their mineral right in an action known as the “Broad Form Deed”, to realize that the practice of surface mining was not an action under their land, but a destruction of their land surface. Instituted at the turn of the century, the Broad Form Deed purchased the mineral rights under landowner’s property — often for as little as .50 cents and acres. The wording of the “Deed” allowed coal companies to do whatever necessary to extract the mineral [coal] they had purchased. Not only were there landslides, erosion, and siltation, considerable acid and mineral pollution of nearby streams also occurred. As reported by the University of Kentucky from a survey conducted by Dr. Wayne Davis, the levels of iron and manganese in the North Fork of the Kentucky River at Hazard saw an increase from 0.02 and 0.00, (prior to surface mining), to 2,1 and 0.8 ppm levels in 1966.  Public Health tolerances limit the level of iron and manganese in drinking water to 0.3 and 0.05, respectively.

Another impact of the increased degradation of land is the economic depression of regional communities that sometimes follows mining. The use of enhanced mining techniques reduced human labor and the correlation of out-migration of workers with the most depressed counties in Eastern Kentucky. The consequent decrease in the tax base further challenged these counties. Harlan County has been particularly hard hit and not just once but successively. The record of decreasing support to schools and social services can be correlated with the boom and bust cycle of coal mining in the county. The passage of the coal severance tax in 1972 increased the revenues for schools and social services in Kentucky and Harlan County but with the current downturn in mining, the tax has dropped by nearly 25% from the severance revenues it received in 2012. Harlan Judge-Executive Dan Mosely notes that the current revenue In Harlan County from coal severance tax is around $7000,000. This is amount is from coal and other minerals

The passage of the coal severance tax in 1972 increased the revenues for schools and social services in Kentucky and Harlan County but with the current downturn in mining, the tax has dropped by nearly 25% from the severance revenues it received in 2012. Harlan Judge-Executive Dan Mosely notes that the current revenue In Harlan County from coal severance tax is around $7000,000. This is the amount from coal and other minerals remaining to be mined, not mined minerals and coal.  [http://wfpl.org/mineral-rights-bills-cause-kentucky-counties-take-hit/  Accessed 201-08-12]

When coal “boomed” another industry also profited. Highway construction crews benefited royally from surface mining as the occupation was often comprised of crews who came to Eastern Kentucky and used their skills to form the base of many of the fledgling surface mining coal companies.  The manipulation of the vague 1966 surface mining regulations ensured that the benefits of surface mining stayed with the coal operators and very rarely with the landowners. Two State regulators, Elmore Grim, State Reclamation Director and Bill Hayes, District Supervisor for the Hazard District Office of State Reclamation, Department of Natural Resources, charged that their jobs were designed “… not to prevent damage from surface mining, but to “minimize” it.

Regulators within the State Reclamation Office were often at odds with the Department of Transportation which rarely was sympathetic with efforts to curb surface mining. Two State regulators, Elmore Grim, State Reclamation Director and Bill Hayes, District Supervisor for the Hazard District Office of State Reclamation, Department of Natural Resources, charged that their jobs were designed “… not to prevent damage from surface mining, but to “minimize” it., suggesting that the full weight of their state government rarely covered their backs. But the discovery of problems also plagued the regulators.  Many issues and solutions were not in any training manual when regulation began to address surface mining in the state. Grim is quoted in those early years as saying, “Hellfire, we’ve got some problems. This is [a] trial and error process. We’re writing the book as we go along.” [“Strip MIning for Coal in Kentucky: Questions and Answers.” Save Our Kentucky flyer, c. 1971]  Bill Hayes, a former Pine Mountain student and later Farm Manager, early-on called the regulations “inadequate” and eventually resigned his job in 1976 in protest of the lax support from the State for enforcement. [Coal Facts. August 19, 1971.] Needless to say, the issues between the State and its regulators were not issues that were mediated in a climate of cooperation. The resistance of legislators, governors, and various state offices was persistent and continued well into the 1980’s.

It was in this contentious climate that Pine Mountain engaged the coal mining industry and the state in its “Lands Unsuitable for Mining” action.  They drafted a declaration document that clearly spelled out their position regarding mining on lands “unsuitable” for mining adjacent to the Pine Mountain Settlement School. What is remarkable regarding this action is its success. The weight of public opinion was clearly shifting by the 1980’s. The action of the settlement school and the subsequent passage of the “Lands Unsuitable for Mining” petition by the Kentucky Legislature was a remarkable negotiation of the local as well as the state political landscape.  While Pine Mountain was not the first public effort to curb surface mining in environmentally sensitive areas, it was remarkable in its passage deep within “coal country.” A previous State petition which was the first Lands Unsuitable for Mining Petition approved, designated 2,900 acres in the Cannon Creek Reservoir in Bell County in 1987. The Pine Mountain Settlement School petition passage in 2001, thirteen years later,  was enacted to restrain mining surrounding the School.

The document for the planning process to enable the passage of the petition follows:

350.610 Designation of lands as unsuitable for surface coal mining.