August Angel (1908-1996) taught science and printing at Pine Mountain Settlement School from 1933-1938 and 1940-1942. Gallery I below displays images followed by transcriptions of August’s letters to Glyn Morris, the School’s director at the time, and a memo by Glyn Morris concerning August’s wages. The original letter and memo are currently located in the Pine Mountain Settlement School Archives.

The images in Gallery II are letters to and from August during his time overseas during World War II, courtesy of the Angel Family. 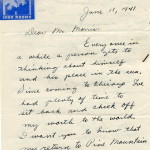 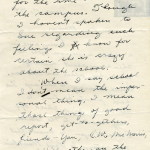 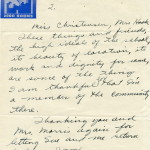 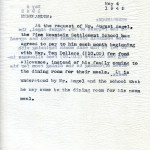 At the request of Mr. August Angel, the Pine Mountain Settlement School has agreed to pay to him each month beginning with May, Ten Dollars ($10.00) for food allowance, instead of his family coming to the dining room for their meals. It is understood by Mr. Angel and the school that he may come to the dining room for his noon meal.

Dear Mr. Morris:
Every once in a while a person gets to thinking about himself and his place in the sun. Since coming to Chicago I’ve had plenty of time to sit back and check off my worth to the world. I want you to know that my return to Pine Mountain a year ago has given me that assured feeling that there I’ve found…

…my little place. In a letter from Sue she writes that she can hardly wait for the time to return to the campus. Though I haven’t spoken to Sue regarding such feelings I know for certain she is crazy about the school. When I say school I don’t mean the impersonal thing, I mean those things of good report, get-togethers, friends –you, A.W. [Dr. Alfreda Withington?], Mrs. Morris, Miss [Gladys] Hill, others on the campus and some of the friends of the school who come year after year —

Miss [Abby] Christensen, Mrs. [Mary Rockwell] Hook. These things and friends, the high ideals of the school, its beauty of location, its work and dignity for same, are some of the things I am thankful for that I’m a member of the community there.Thanking you and Mrs. Morris again for letting Sue and me return to live, I am,
Respectfully,
August

August left the School in 1942 for other employment. In 1944 he was called to serve in the United States Army during World War II and its aftermath. He spent the first year of service at various Army camps, where his training included German military terms, language, lifestyle and recognition of aircraft and army material. August’s assignment took him to Germany as a Special Agent with the 970 Counter Intelligence Corps (CIC) Detachment, Department of the Interior. He served until March 1946.

During August’s time overseas, he corresponded with his wife Susie Hall Angel, relatives, friends, and former co-workers at Pine Mountain Settlement School. He saved 170 of those letters, all in V-Mail format in which each letter was censored, photographed and reduced in size to approximately 5″ x 4″.

Images and transcriptions of three of those letters are recorded below. One is a handwritten letter to August from Alice Joy Keith (Mrs. C.A. Jack), a PMSS science teacher from September 1937 to  June 1945. The other two letters (handwritten and typewritten) were from August to his wife, describing meetings in Europe with Glyn Morris, director of the School from 1931 until 1942. The images were submitted to this page by his daughter, Ann Angel Eberhardt. 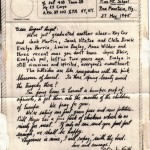 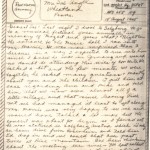 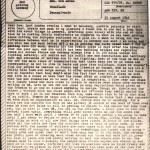 The hillsides are like rose gardens with the pink blossoms of laurel. Is there spring beauty amid the tragedy there?

I’m going home to harvest a bumper crop of apricots, to get them into the mouths of the children in Europe. We pray for you.

We’re eating our first green peas and new potatoes. Bill Hayes has a fine flock of chickens, which do us nicely for meat. If only we can send you food fast enough, we shall be happy.

“Vengeance is mine, I will repay,” saith the Lord.

Dearest Sue:
Last night I drove to Salzburg to go to a musical festival given annually in memory of Mozart, and guess what? Right in the entrance to the music hall I ran into Mr. [Glyn] Morris! He was more surprised than I because in a way I expected to run into him, since I knew he was in Germany and would no doubt be attending this series of concerts. We talked a bit and the few minutes we were together he asked many questions – mostly about you and the children. I put him at ease regarding Ann and Mike, and told him that we now own almost all of a little village and that since leaving Pine Mountain we had managed at least to get along.

Mr. Morris was very happy to see me and would have talked a lot more, but the concert was about to begin – so I found out he was stationed in Salzburg, Austria, which is only an hour’s drive from Rosenheim, and told him I’d drop in and we could chat over past
times at Pine Mountain. I’ve been thinking about the meeting ever since. We last talked to each other over 3 (8?) years ago in the office at Pine Mountain, and now halfway around the world in Austria – what a life and a small world!
Love,
August

Dear Sue:
Last Monday evening I went to Salzburg, Austria, purposely to visit with Capt. Morris and, much to my pleasure, I found him in and had a long talk with him about things in general. Everything goes nicely with him and, at this time, he is resting fairly comfortable as compared to what he has been getting since hitting the European continent on D plus 12.

I want to bring out the difference between what he is experiencing in Germany and what I am doing, and you will see how much better off I am in getting the lucky break that I did by getting into CIC (Counter Intelligence Corps) work. Morris hit the French coast 12 days after the invasion over one year ago, and his outfit has been building bridges and repairing roads all across France and Germany, always from 5 to 100 miles behind the fighting
infantry. All Morris and his outfit saw was destruction and territory that was evacuated of natives due to the fighting. Most of the time he was so far off the main lines of communication that there were few or no towns and consequently he had to live in tents and poor farm buildings. Since he couldn’t find any people, he learned no French and likewise no German. Now he has hit a fairly nice town and large enough to offer entertainment, and he and his bunch are so thankful that they don’t mind the fact that they still sleep on cots and live in a house so bare that the rooms offer no comfort
or luxury except what the men themselves do to make it so.

In comparison, I flew over the ocean in a luxury plane and have lived in hotels or castles ever since, have servants waiting on me, have my own car and under no Army regulations, which gives me the freedom to go and do almost anything in Europe. Though Mr. Morris and the others I visited with the other night are all officers, they really envied the type of work I am in and remarked that they sure…

August 21, 1945
Page 2
…would like to be in that kind of an outfit. It made me happy and a bit lightheaded to think that I was connected with such an organization as CIC.

Mr. Morris will be in Salzburg for a while yet and, despite the fact he has already 38 months in and most of them overseas, he does not think he will be getting to return to the States for some time yet – and he is also over 38, too bad on the officers. I still plan to visit him several times again. ….
August