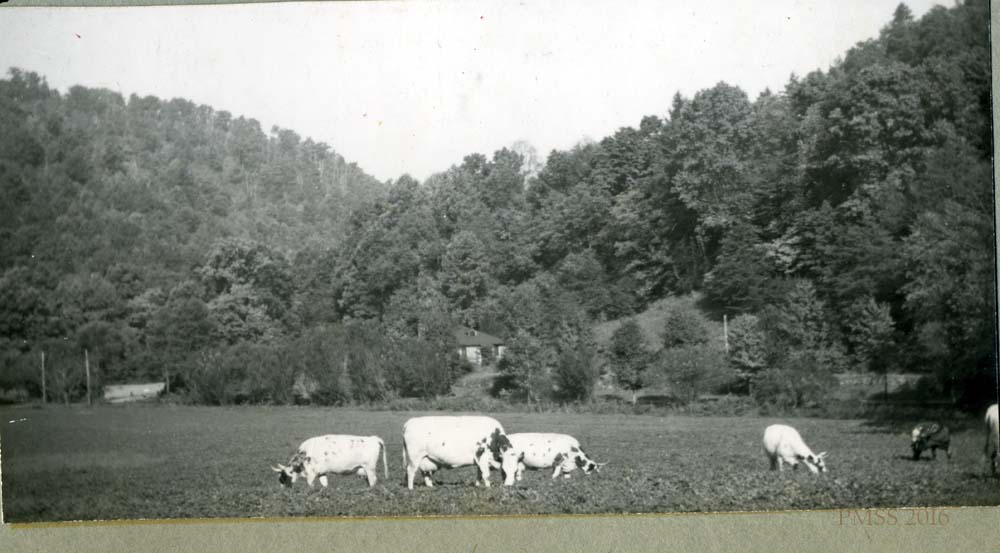 Ayrshire cows and one dark cow in field. Office in the background. [nace_II_album_043.jpg]

ELIZABETH C. HENCH TRUSTEE: Secretary of the PMSS Board of Trustees, 1914-1931[?]. Promoted the School’s farm in its early years & established the Ayrshire cows at PMSS.

Elizabeth C. Hench (1869-1939) was the Secretary of the Board of Trustees at Pine Mountain Settlement School from 1914 until 1931[?]. She was the champion of the farm at the School in its early years and almost single-handedly responsible for establishing the Ayrshire herd during the years when the School supported and depended on a dairy. An accomplished writer, Hench’s correspondence is always spirited.

She was born in Carlisle, in Perry County, Pennsylvania, on the 26th of May 1869[?] and was educated at Miss Florence Baldwin’s School in Bryn Mawr, Pennsylvania, near her home. She then attended the University of Michigan from 1893-1895, finally earning her Ph.B degree in 1895.

For one year, 1896-1897, she attended graduate school at the Thurston Preparatory School in Pittsburgh, PA, where she prepared in history and English. Following her graduate work, she accepted a position as a teacher of English in the East Side High School in Saginaw, Michigan. She remained in this position from 1897 until 1900 when she traveled to England to study at Newnham College, Cambridge. Her study in England from 1900-1901 was brief but formative. She returned to the States in 1901 to accept a position as an English teacher at the Manual Training High School in Indianapolis, Indiana, where she taught for the remainder of her career, eventually becoming the head of the English department. She also pursued additional graduate work at Columbia University, but the dates of her study there are unknown.

It was at the Manual Training High School that she met Ethel de Long who had come to Indianapolis as a teacher in 1905, following her graduation from Smith College and a brief teaching appointment at Central High in Springfield, Massachusetts. Ethel de Long and Elizabeth Hench both taught at the Manual Training High School in Indianapolis; Hench, from 1901 until her resignation in 1925 and de Long, for five years until 1910 when she was recruited to Hindman Settlement School in Kentucky.

It was most likely that Miss Hench was drawn into the work at Pine Mountain because Miss Hench and Miss de Long were colleagues in the English department at Manual. Also, both Hench and de Long were fortunate to work under Calvin N. Kendall, who was the Superintendent of Schools in Indianapolis during their tenures with the Indianapolis school. Kendall, who appears to be both a mentor and later a friend. On several occasions, Ethel de Long was a guest in the Kendalls’ home.

Kendall advanced in his career to become the New Jersey Commissioner of Education in 1911 and an important figure in national education. He was a life-long friend and admirer of both Ethel de Long and Elizabeth Hench and, for a brief time, Kendall served on the Board of Trustees for Pine Mountain. He was obviously a valuable source of support for Ethel de Long as she shaped the educational program at Pine Mountain and for Hench who sat on the Board. It was most likely de Long who recruited both Hench and Kendall to the Pine Mountain Settlement School Board.

Elizabeth Hench was an engaged board member. Her correspondence is extensive and as the Secretary of the Board, she was the keeper of the School’s events and the generator of much of its early memory. But it is her one-woman campaign to bring “Joy” to the School that is the most memorable record of her engagement.

Joy was a cow. She was the first of a long line of cows that had names that grew from the name “Joy” and that formed the Ayrshire herd at Pine Mountain. The Cow Letters, (1927-1933) are a series of “Dear Friend” appeals for donations to support the herd. Her appeals are among the most entertaining documents generated by any board member and represent one of the most successful campaigns to raise money for the school’s farm.

Elizabeth Hench never married, but there is evidence of very interesting men who found her attractive. One of these was Alphonse R. Dochez, winner of the Nobel Prize for his work with scarlet fever and other diseases and founder of the journal for the Society for Experimental Biology and Medicine (SEBM) 1932-1934. [See: August 11, 1913, NYT] Dochez worked for Presbyterian Hospital and was associated with the Rockefeller Institute for Medicine in New York City and was well-known as a charming but reclusive bachelor. A colleague of Dochez’s was Philip Hench who was also a leading pioneer in the field of microbiology. Philip’s relationship with Elizabeth is not known, but he was also from Perry County, Pennsylvania.

Elizabeth Hench died on October 25, 1939, at the age of 70. Her obituary in the Indianapolis News, Thursday, October 26, 1939, indicates that she died in Carlisle, Pennsylvania, where she had been born and had retired after twenty-four years in the Indianapolis school. Her death, by all accounts, was unexpected, though she had retired early due to ill health.