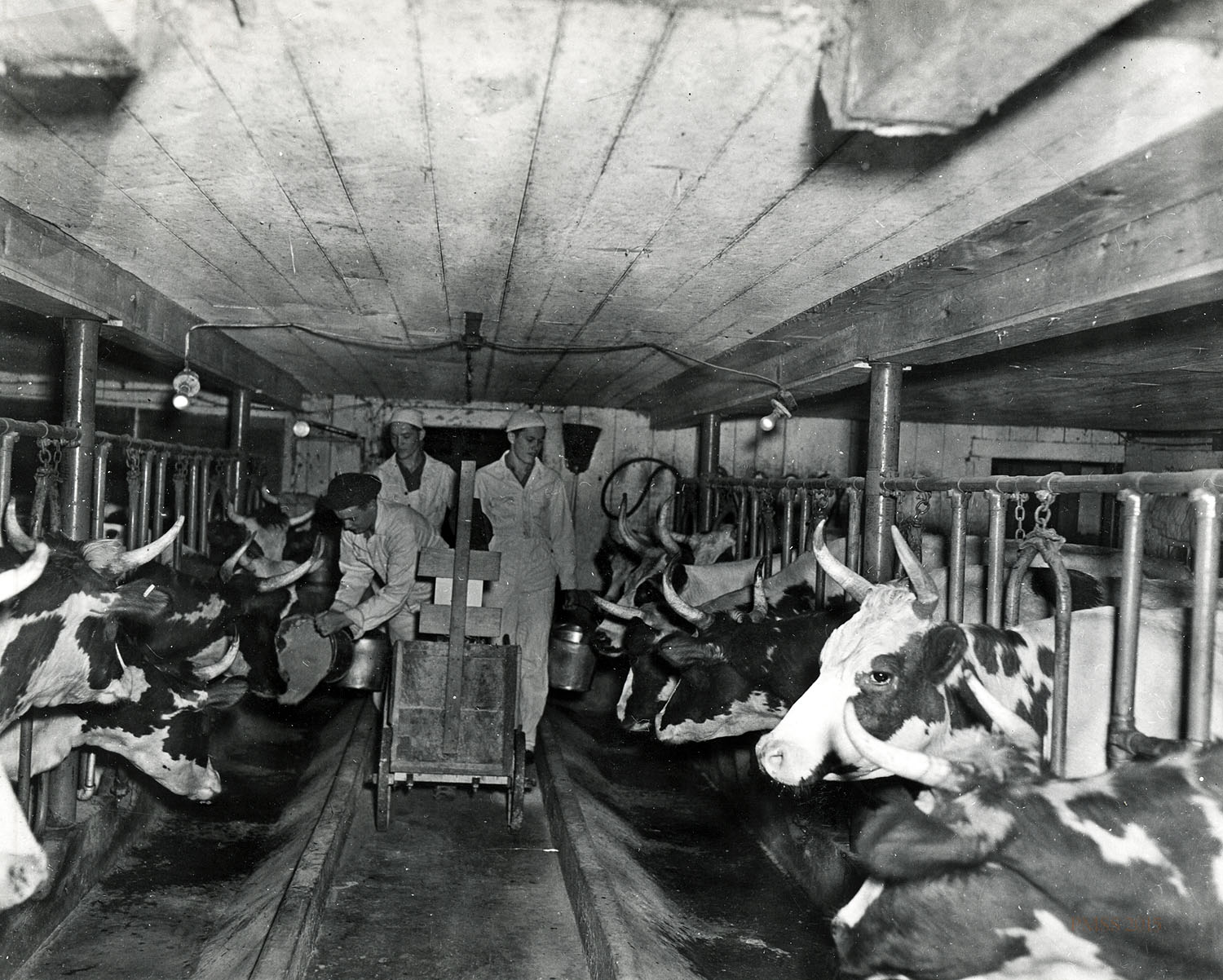 The dairy was a vital part of the health of the School as well as its educational programs. In operation from the first year of the School until the end of the boarding school in 1949, the cows maintained by Pine Mountain provided a source of income and a farm classroom that proved to be invaluable to the students who received training and discipline in this industrial training environment.

Evelyn Wells writes the following in her notes on the History of the School:

When one looks at our herd of fifteen milking cows, our Ayrshire bull in his pen, the calves and heifers coming along, the barn with its concrete stalls and improved stanchions, the carefully screened milk-room with its accurate records for each cow, and the simple but intelligent arrangements for the care of feed; and when one hears that we are now getting a little over a quart of milk a day per person, even in the winter, it is hard to remember the long road that has been traveled since the early days. In spite of the lack of proper pasture and the expense of hauling carloads of feed sixteen and eighteen miles over rough mountain roads from the railroad, the school has held to the dream of one day being able to give the children all the milk they ought to have.

Mr. Philip Roettinger of Cincinnati was one of the pioneers in helping us get the dairy on its feet. In 1914 he took charge of raising $500 for the barn, by sending out postcards asking for a dollar apiece. The barn was built*in the summer of 1915. At first, there were only “mountain scrub” cows, but in 1916 the experiment of raising Jerseys was tried. Four cows and a bull were bought in the Blue Grass. They proved too delicate a breed for the school, however, and three years later two Holsteins and a Holstein bull and a Guernsey were bought. Then we began to hear about Ayrshires, and on the advice of the University of Kentucky Experiment Station and our county agent, Mr. Robert Harrison, the Ayrshire strain was brought in, as best suited to mountain farm conditions. The aim is now to build up our own herd from this strain, raising our own heifers, but until our herd is all Ayrshire, we are thriving on the milk from the mountain scrubs, the Holsteins and the descendants of the Jersey cows of 1916.

The production of the individual cows is an impressive list, however in 1942, fate took the Diary in another direction that almost ended in disaster for the health of the herd and the health of the children and staff at the School.

For the story of  that near disaster see: MEDICAL 1942 Sore Throat Epidemic at PMSS

DANCING IN THE CABBAGE PATCH Cows