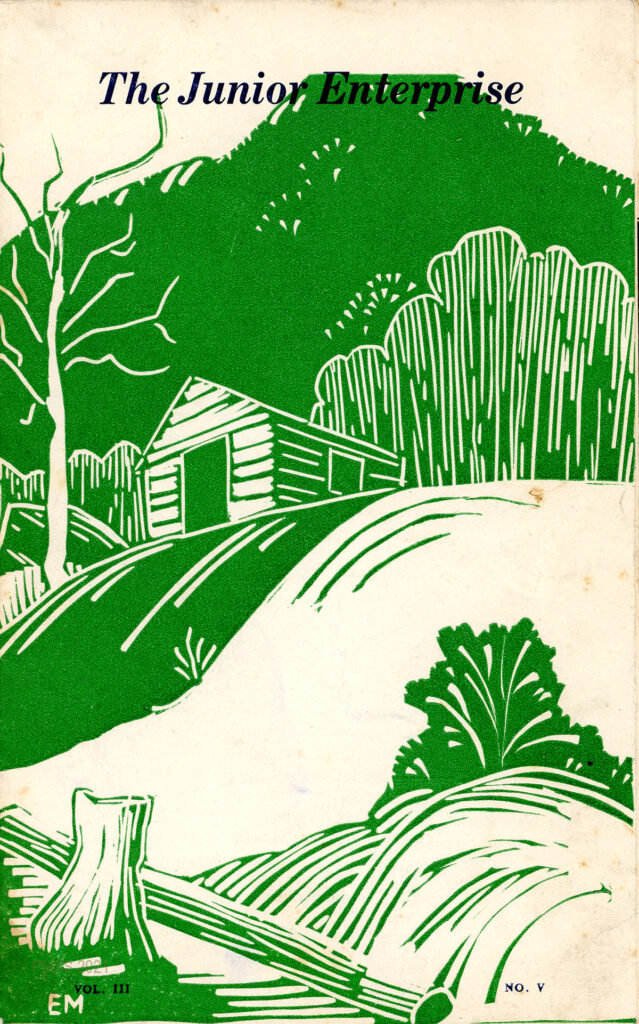 Our senior paper in its last issue mentioned that there seemed to be something growing up on the hill. The boys of group B have found out that it is not an easy thing to build a cabin. It took a great a days to get 580 feet of logs into place. If you look sharply you can see the cabin growing a little every day.

Group B intends to finish the cabin as a lean-to and make a gift to the school. When it is finished there will be much more to it than just the cabin. The toughest job was getting the logs into place, but we still have to work out a way to get clay on the hill. It is pretty slow growing but that doesn’t make us unhappy for some day we will have the fun of it.

A freckled-face boy with a battered straw hat on his head a corn stalk in his hand, and a small dog at his heels was walking alone in a field. He pulled at a dead milkweed stalk and a spray of white filled the air. the white floated gracefully to the ground ad looked like fairy diamonds. He whistled at a naughty squirrel that was running around chattering so fast. He patted the head of a young calf that kicked its mischievous heels up at him. He ran over the gay-colored leaves that Sister Autumn had laid on the ground. He stopped and propped up a young pine tree that the hurrying wind had blown sideways. Every once in a while he paused ad listened. Yes, fr the cowbells! He climbed a steep bak and got a golden rod for his mother. Then onward he went with a smile on his lips and a song in his heart.

This, then was Kathleen’s story. “Once my parents and I were rich. I had anything I wanted until one day I got a telegram to come to the city hospital at once. There I found my parents dead. They had been killed in an automobile accident. Then my father’s brother ran off and to everything I had left but my dog. I know these men. The leader of the gang is my mother’s first lover and so he was going to take his spite out on me by making me marry him. Oh, how glad I am you came. These men are the ones who stole all those things from the people. I saw them do it. They have some down in the cave now.”

It was still snowing hard but dawn began to appear. I helped Kathleen out of the window ad told her to run for the sheriff and his men. Then I bolted the door so no one could get in. The men began to fight and I never had heard such an uproar before. They were throwing things and cursing,  and buzzing like bees. Finally, they quieted down and I thought they were all asleep. I peeped through the crack in the door ad they were lying all over the floor.

Then someone began to beat and bang and curse against the door, hollering that he would get in if he had to tear the house down. While he was banging away the sheriff, Kathleen and the men came up. I climbed out the window and dashed to meet them. Their coming was so sudden that the outlaws didn’t have time to do anything and they had to surrender. some of the men found the stolen things in a cave ad brought out the dog.  [handwwritten: “Continued on page 4”]

Zande House was begun in 1917. It was built by Mr. Zande. Where Zande house is now it used to be a rock pile. So the stone that it is made of came form [sic]  where it stands.

Mr. and Mrs. Morris live at Zande House. On Open House Day we all like to go up to Zande House, for they have it decorated up pretty, and they also serve coffee, cake, and candy.

[cont.] Kathleen knelt down by him and began to cry. She petted him and said, “Oh, my poor dog! You were almost killed. You were too faithful to me.”

One of the men asked her, “How do you know he’s your dog?”

She quickly took the locket which was hidden in the thick hair of the dog’s neck, opened it, and it was her picture!

Kathleen and I then took Rex home with us. He soon was good friends with me. We were happy for the bad men were no longer free. I told Kathleen that some day soon she would even get her own home back.

THE END
I GAIN AND I LOSE

The first money I ever found was in front of a drug store. The money was a small sum but great to me. I ran home and showed it to my mother who smiled and asked where I got it. She picked me up in her arms. Just then a man came in. He took me out of my other’s ars into his ow. He played with me awhile and when he was ready to go, he gave me a dime to buy ice-cream. I got no ice-cream because I swallowed my dime.

ON SEEING A PICTURE

Robin Hood and Little John
Have coats made of leather,
Not for looks, my little one,
But to protect them from the weather.

When the girls of Big Log went home for the dancing class it was snowing and they all cried out, “Old Christmas Eve!” At Big Log a whole room full of wreaths from our Christmas before we went home, was left to be burned. We girls knew that Mrs. [Winifred] Powell had invited the Far House boys up to help us burn our wreaths.

When the boys came Mrs. Powell played the piano for us to sing carols while Helen Ruth and Elizabeth took the wreaths down and burned them one by one.

After that, we got in a circle around the room and played a game while one of the boys and two girls popped the pop corn and played Pleased or Displeased.

Mrs. Powell got the idea to burn the wreaths on Old Christmas Eve from the French.

When I was about ten years old, I had a little calf named Bill. I petted him and fed him till he was very gentle. I could ride him wherever I pleased.

Father got me a little yoke for him. Then he made me a little sled. I could haul rocks, wood, or just ride by my self.

One day mother told me to go after a bucket of water. I had my calf caught. I jumped upon him and rode after my water. When II got to the well I got off, got the water and then got back on my calf. My sisters and brothers never let me forget going after that bucket of water.

I sold my calf but I can never forget the day I let him go.

THE NEW EDUCATION AT PINE MOUNTAIN

Mr. Hayes, in the back of the wagon, and Mr. Wilder, driving, were hauling rocks to put on the road in front of the school house. They started to stop on the bridge to unload. No sooner did Bob and Bess get on the bridge than they jumped so as to nearly throw Mr. Hayes out of the wagon. He caught onto the end gate which kept him from falling out.

Mr. Wilder got an idea. He blindfolded Old Bob and led him around the playground so he wouldn’t know when he crossed the bridge. But still, Old Bob knew when he got to the bridge. There he stopped. Mr. Wilder was disappointed. All the while Mr. Hayes was holding old Bess and watching the lesson of how to ake Bob cross the bridge.

Next Mr. Wlder decided this wouldn’t work and took the blindfold off. He found out it was an easier way to lead him across. He stopped at the middle of the bridge to let the mule look off at the water. Old Bob tucked his tail between his legs like a lost dog.

The farm men felt they were getting along and hitched the mules to the wagon. When front feet were on the bridge, they stopped! Mr. Wilder got so discouraged that he fell back on the old method of whipping. Bob and Bess dashed across the bridge!

Silver beams creeping
Down through the trees,
Silver leaves bowing to the ground
Whispering all kinds of sounds.

The valley may be haunted
Where little children sleep,
Little moon elves searching
For something lovely and sweet.

*John Raymond Pennington (student 1936 -1939)was one of the first students to join the war efforts of WWII. Seriously wounded, he died at age 23 in 1944. A small memorial to his honor is located beneath a dogwood tree near the William Creech Fountain 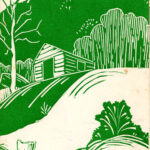 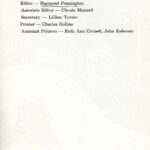 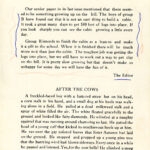 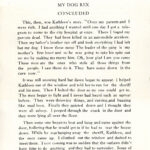 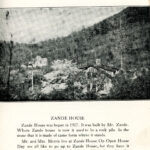 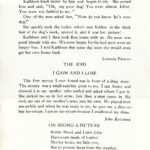 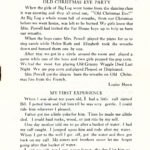 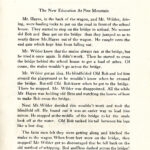 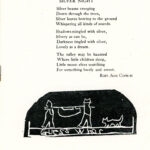