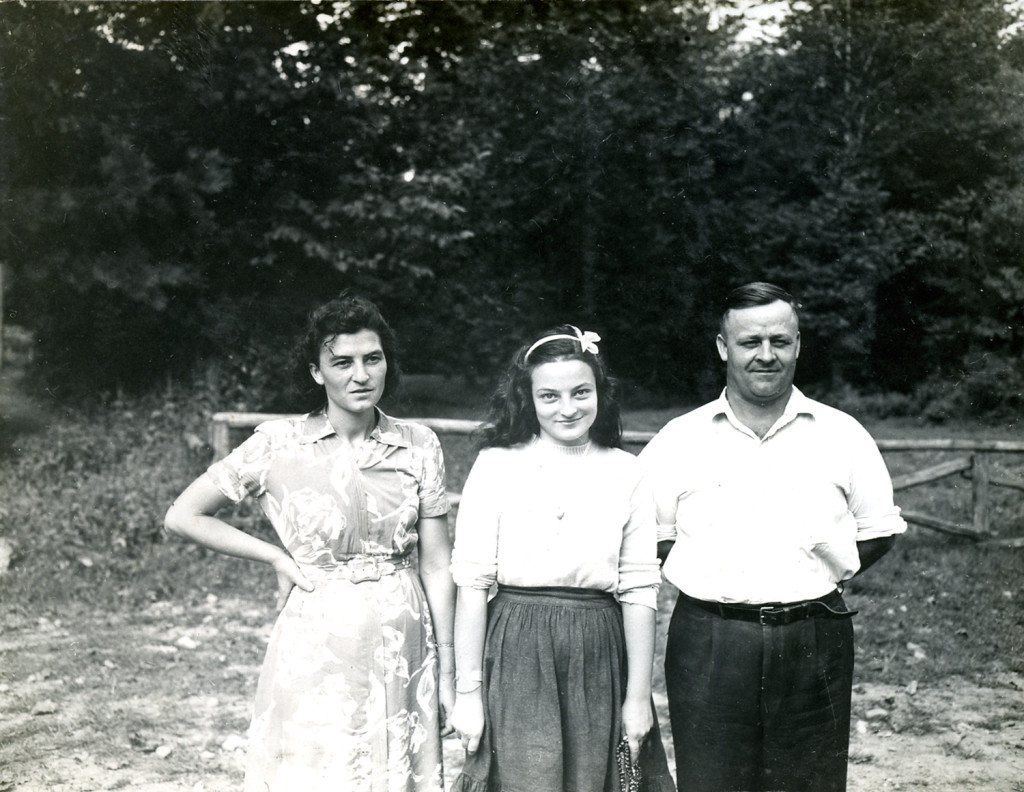 Brit Wilder is often mentioned in documents and letters in the Pine Mountain Settlement School Collections for a good reason. He spent most of his life at the School beginning as a student in the 1920s. Later, he worked as the School’s maintenance man, mine superintendent, and assistant farmer. Then he was promoted to farm manager, a position in which he continued for 39 years. All the while, he was well-respected for his good nature, diligent work ethic, and devotion to the School’s well-being.

BRIT WILDER AS A CHILD

Clara Davis, a nurse during the School’s earliest years, described Brit as a child in a 1913 letter: 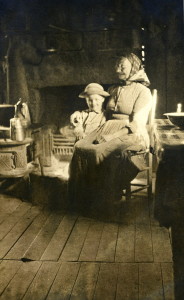 Miss [Evangeline] Bishop has such an interesting little class and her star pupil is Brit Wilder, the poor little sickly fellow whose father brought him down here for advice some time in May. The poor child had indigestion from eating too much grease. They had no cow so Aunt Sal has been sending milk up for him every other day till kindergarten opened and he and Sally [Brit’s older sister] came down to stay with her and go to school. You never would know him now. He is fat and rosy and jolly and keeps things interesting in the school room with his baby chatter.

Aunt Sal Creech was the wife of William Creech who donated land to the School. And it does appear that she had a special place in her heart for this little boy who was her grandson. Katherine Pettit, PMSS’s co-founder, mentions Brit’s relationship with Aunt Sal in her 1913 report to the Board of Directors. It was written on the campus during the first summer before the School officially began. 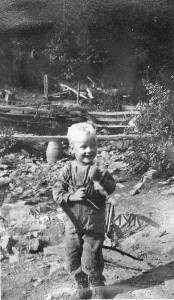 I do not believe any pupils in this part of the country are attending school more regularly than the few pupils who are coming to our little summer school. The parents are so delighted. Britain, the youngest pupil (four years old) lives four miles away, but he stays at “granny’s” to be nearer school. He is a quaint, before the war picture as he comes in his wide-brimmed soft felt hat, long breeches and galluses.

Peter Rogers, son of Mary Rogers and Burton Rogers, also recalls Brit’s earliest days at Pine Mountain, stating in a September 2016 email, “Brit and his parents, Henry and Rhoda Creech Wilder, lived about half-way up Little Laurel, but I’m sure Aunt Sal was glad to keep her grandson for the summer.”

The PMSS Collections hold an undated (c. 1980) video of Brit Wilder talking about the Pine Mountain School life that he experienced. (For more about the video inventory, now also in DVD format, go to GUIDE TO VIDEO HOLDINGS.) A description of Brit’s narrative on the GUIDE TO VIDEO HOLDINGS page gives an idea of the breadth of his connections to prominent individuals and historical events at the School. The video overview begins with his earliest PMSS years as a student:

Brit discusses coming to Pine Mountain as a student in 1925. He describes the history of the acquisition of land in eastern Kentucky by the Creech family who were his relatives….

Describes Louis Lytle’s role in the founding of the School and the early years in the Masonic Hall that was used as the earliest classroom for the School. He describes the sawmill and early construction. Tells of the Laurel House I fire [1939]. [In 1941 Brit laid the cornerstone for Laurel House II, the building that replaced Laurel House I.]

Tells about his school days of 4 hours school and 4 hours work. One of his jobs was driving the mule team. Tells about the basketball team, as well. His best memory was “all the time.” He describes Jack’s Gap and the workers who loved to hike the mountains. “You didn’t have an idle minute…” at Pine Mountain. Memories of Katherine Pettit are revealing….

According to Brit’s video interview, he married Ella (Madon) in 1933 and was a coal miner for a short time before his employment at Pine Mountain. He continues with memories of his fellow PMSS employees:

He talks about Grace Rood, a nurse, and how she was well thought of in the community. He talks about his grandfather [William Creech] who died at age 69. He tells about “wonderful” Ruth Gaines who came to be a secretary but the job had been taken. She was then hired as the dietitian and she stayed for 19 years. She supervised canning and cooking and garden work. He stresses the importance of Pine Mountain to the community and recommends Pine Mountain pay attention to the starvation in the mountains now and the misuse of Federal food stamps. “If they went to Pine Mountain I could trust ’em.”

Discusses celebrations at Pine Mountain, particularly Fair Day and describes dancing at May Day. He recalls Christmas and the Nativity Play. He had many years in the play but grew tired of the commitment to rehearse, as he knew all the lines. Describes Luigi Zande and his stone work and the large, long settee that Zande designed and built. Also, many of the tables in walnut were Luigi Zande’s work, according to Brit. Tells about working in mines and how that work was difficult because the mine took all their salary back in “cuts.” He describes the union need for miners and the disputes around inequality in the coal fields.

Talks about Aunt Sal [Creech], his grandmother: “She was a grand woman …. she didn’t know any strangers. She always invited people in for dinner or supper.” Describes Mary Rockwell Hook and her work. “Well, you would have to catch her still in order to describe her….” Talks about Open House and its “slab” construction that was derived from abandoned lumber. Evelyn Wells is described by Brit as a “music teacher.” “If you could find any music in anyone, she could.” Marguerite Butler? “She was an extension worker” who lived in the Log House (Cabin) 7 miles from here [Line For Settlement].

[Luigi] Zande was brought here to build the reservoir, said Brit. He had a helper who did not stay. “That Zande was one more stone layer! He was stout …” Brit visited Zande in Asheville after he left. He talks about the adopted daughter of Zande. Talks about the “fine” people in the community and how accommodating most of them were and are. “They can be some of the poorest people, but they are some of the nicest people you will find.” PMSS gave us “the cream of the earth to associate with.” He says with strong conviction, “I believe that one of the best things one can do for one’s self is to associate with people who stand up for what is right.”

He describes making maple sugar from the maple forest near his grandparents home….

Brit Wilder was first employed as a maintenance worker and mine superintendent from 1937 to 1950. By 1945 he became an Assistant Farmer, then farm & maintenance manager in 1955, following in the footsteps of his former supervisor, Bill Hayes. Brit remained in that position until he retired in the spring of 1974.

The 1943 Pine Mountain Family Album described Brit, along with Boone Callahan and Bill Hayes, as among the School’s significant workers: 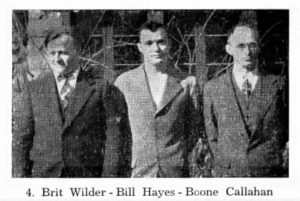 Boone [Callahan] and Brit [Wilder] were among the first students to come to Pine Mountain, and since the days when they cut “pretties’ for Miss [Katherine] Pettit with their pocket knives, they have never been far away from the active life of the school. Boone …has been in charge of the carpentry department for years. … Brit is the truck driver and superintendent of the mine. He is a grandson of Uncle William, is married to a former Pine Mountain student and has a lovely home close to the school grounds.

Bill [Hayes] is a newcomer, who has been with us only ten years, but is now indispensable as our school farmer….Someone has rightly said that as long as we have Boone, Brit and Bill there’ll always be a Pine Mountain.

Peter Rogers’ father, Burton Rogers, was PMSS Director from 1949 to 1973 and his mother was a teacher. Peter remembers Brit Wilder in a September 2016 email:

I knew Brit quite well as the maintenance supervisor and much more. He even shared birthdays with my father (though he was one day older). But I did not realize he was part of PMSS from the first months as a “charter” student.

…Brit was an enthusiastic instigator for the 1963 and 1964 Little Schools. Dad always said it was Brit’s idea to use the older students (and thereby mostly older brothers and sisters) as volunteers to escort groups between activities and assist with the activities – and at the same time as giving the “volunteers” valuable training and experience. I’m not sure but what we (yes, I was one of the “volunteers”) got more out of the experience than the younger children. There were more volunteers than students so we had to rotate days. I also think it may have been Brit’s idea to re-use the name [of “Little School,” which was originally in operation during the 1920s and 1930s].

Brit Wilder retired from PMSS employment in May of 1974, an event that was reported in the November 1974 issue of Notes from the Pine Mountain Settlement School on page 1:

After 25 years of faithful and excellent service as head of maintenance, Brit Wilder retired last spring, to be succeeded by his cousin, a former Pine Mountain student and our friend and neighbor, Omer Lewis. No one takes Brit’s place of course, but Omer has his own valuable place and we couldn’t have found a better successor for our maintenance head.

The History PMSS Summary 1973-1974 recorded that “In appreciation of [Brit Wilder’s] long, valuable service to PMSS, trustees voted to construct a water line from PMSS campus water mains to the Wilder residence.” 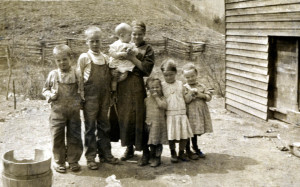 In 1933, Brit married Ella Madon. According to student records in the PMSS Collection, Ella Madon had been a student, along with her sister, Carrie Madon, at Pine Mountain Settlement School in 1928-1929.

Documents in the PMSS Collection indicate that Ella Madon Wilder was often involved in PMSS activities. In 1949, Ella and a PMSS worker took a walk through the PMSS community. Their purpose was to spread the word about the upcoming Community Fair. Also, they were looking for vintage items they could borrow from their neighbors to display at the Fair. The worker, possibly Dorothy Nace, wrote a description of the experience and included this portrayal of her hiking companion, Ella:

…. If you know Ella, you know what a strong silent sort of person she is. One has the feeling of still water flowing deep. There is so much behind and beyond those quiet steady eyes, and the occasional quick lighted smile. She’s like Mona Lisa ….

The first house the two encountered on their journey through the local community was the former home of Rhoda and Henry Wilder’s family, where Brit had lived as a child. Farther along, the two women stopped at the one-room log house that Brit and Ella built for themselves as a young couple and where their daughter, Barbara, was born. The now deserted and dilapidated houses evoked fond memories for both travelers of past times.

The story moves on to describe other houses, the families, the loaned artifacts, and the beauty of the mountain trail they traversed. (For a full transcription of the 1949 story, click here.)

The Wilders’ only child, Barbara Wilder, was born on April 22, 1934. In his video, Brit tells of wanting to get her into a good school and did so with help given by the PMSS staff.

Barbara married Melvin Engle. She died on April 5, 2010, and was buried in the Creech Cemetery, Bledsoe, Kentucky. 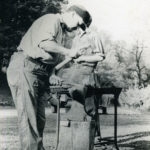 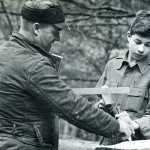 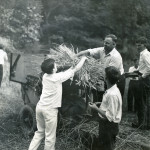 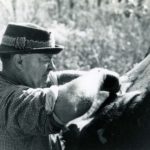 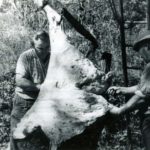 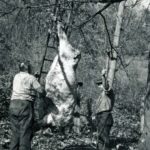 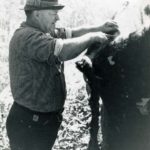 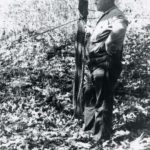 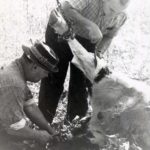 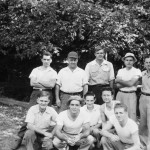