Little has been written about Luigi Zande who was a worker at Pine Mountain Settlement School and husband of co-founder Ethel de Long Zande. However, his legacy at the School has lasted almost a century in his well-crafted stonework that can be seen to this day on the campus.

Genealogy websites record that he was born on March 11, 1887, in Auronzo (Auronzo di Cadore, Provincia di Belluno, Veneto, Italy). A picturesque town, it is bordered by a lake and nestled in a Dolomite range of mountains in northern Italy. He arrived in the United States as Luigi Zandegiacomo in the early 1900s. His surname is common in the village of his birth – the current mayor is Bruno Zandegiacomo Orsolina – and several Luigi Zandegiacomos arrived as U.S. immigrants during that time. Therefore, it is unclear which passenger ship entry with the date of arrival applied to the Luigi Zande who ended up at Pine Mountain.

A footnote in a graduate school thesis by Betty Parker Duff, suggests that “he may have been one of the Italian stone masons recruited [by] U.S. Coal and Coke to build the foundations for [Lynch, Kentucky]’s tipple and mine offices.” Glyn Morris, a director at Pine Mountain Settlement School, wrote that Zande was “a gifted stonemason working at Lynch, a U.S. Steel mining town across the mountain, [who was] persuaded to come to Pine Mountain” when the growing school needed additional buildings.

Bill Dawn, a former student in the 1920s, wrote about his memories of Luigi Zande in the 1979 Homecoming Report of the Association of Alumni & Friends:

A few years earlier a stone mason was found at Lynch, Ky., working on their new coke ovens. Pine Mountain needed someone to build a water reservoir and he came over for that job only. He was a recent immigrant, speaking broken English. He was a big, handsome, blond, blue-eyed Italian, very intelligent, very likable. This was Mr. Luigi Zande.

Instead of one job, he not only married the co-director, Miss de Long, but within three or four years built the water supply system, the electric light system, the Chapel, overhauled the sawmill, etc. etc. He was a great cook too! Their baby was born soon after I came to the school.

Mr. Zande was a fine man — even a great man! He could do anything well. I counted it a privilege to be a “Zande” boy as against a farm boy and [we] thought of ourselves as an elite group. The Industrial Arts Building was built during my stay. There, in winter, we built furniture for the school buildings and dorms, even made coffee for local people. (I helped build the yellow poplar and walnut-trimmed coffin for Aunt “Sal” Creech ….)

Mr. Zande personally taught me woodcarving — the extra money from which came in handy later at Berea.

In a February 1915 letter to her family, PMSS teacher Marguerite Butler mentions Zande as a versatile worker: “Our Italian man of all trades tho’ he came to us as a stone mason does everything from building houses to the cleaning of chimneys and mending of shoes.” Luigi lists his responsibilities in a May 1928 letter to Darwin D. Martin as “wood-working classes, repair and upkeep work, and supervision of the various machinery around the place.” 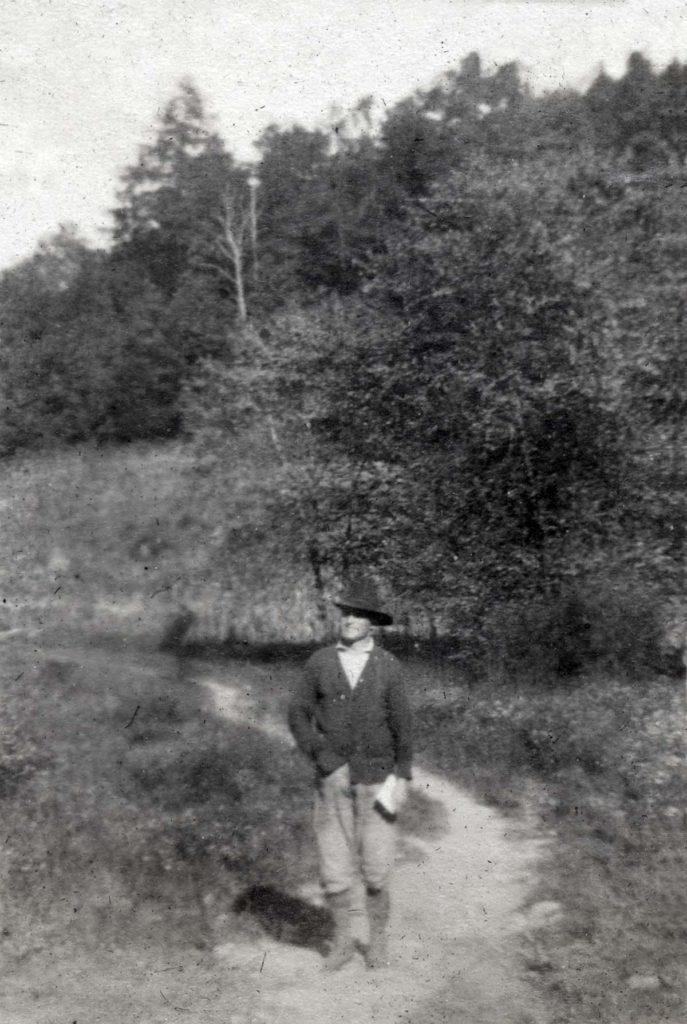 On a nomination form that was submitted in 1991 to the National Register of Historical Places, Zande is listed along with Mary Rockwell Hook as architect and builder at Pine Mountain Settlement School. The form also indicates that Zande was brought to the School around 1916 to “construct [the] stone reservoir which is still in use. After its completion Zande stayed at the school, teaching stone masonry to many local citizens and helping construct many of the campus buildings.” He is listed in a November 1927 issue of Notes from Pine Mountain Settlement School as part of the Industrial Faculty (his 14th year) and also superintendent of buildings.

One of the projects that was possibly most meaningful to Zande was assisting with the burying of Uncle William Creech, the donor of land to the School. A transcription by Evelyn K. Wells  of a letter dated May 1918 describes his work and sentiment:

On Monday afternoon, after Mr. Zande and Andy Drosky had toiled all day over the grave, we went up the hill to the burying. Mr. Grit Lewis preached and prayed, real mountain-fashion; Mrs. Zande told about his last days, and the children sang. But of course there was a great outburst of grief at the end. A few of us stayed after he was “put away” and watched the men laying the big stones. Mr. Zande said later that he was so glad to do this for Uncle William: that once when he had just come to the school and was working one day on the stone tool house, Uncle William had come past and admired his work, and asked him to build him such a house one day.

The November 1927 issue of PMSS Notes described the work of Zande’s students:

While good weather lasts, our two squads of boys are working hard outdoors….Mr. Zande’s boys have tiled and filled in a long ditch, have helped finish two new rooms in the loft of the Model Home, and are now working on a small addition to our Infirmary, so we may have a much needed receiving room and an office for dressings and treatments. A one-room “pole house” is being put up for Mrs. [Martha] Burns, who is in charge of our dairy and poultry. 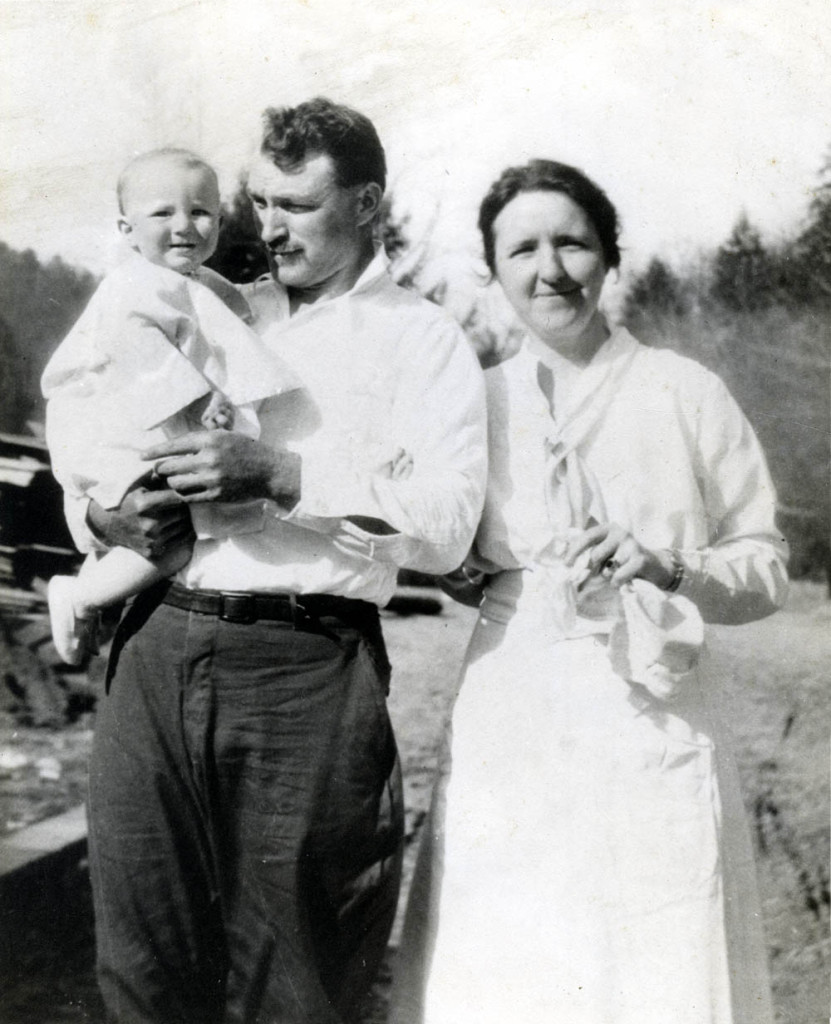 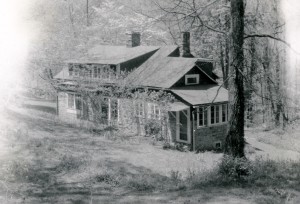 According to the above sources, Luigi Zande arrived at the School in 1914. He was granted full U.S. citizenship in 1917 and a year later on April 10, married Ethel de Long, co-founder and co-director of Pine Mountain Settlement School. Their son, was born in Louisville, Kentucky, on March 19, 1919, and named Alberto (“Berto”) Zande after Luigi’s father. Four years later, the Zandes adopted an infant daughter, Elena Zande (born December 28, 1922).

The Zandes’ home life was described in PMSS Notes, September 1928, as follows:

The little hillside house built by Mr. Zande for their home was always sweet and orderly within, full of pervading loveliness that one can never forget. Its stone terraces she and her husband made with their own hands. Flowers of her planting were always blooming. It was a home in which mutual love and happiness reigned.

As described in a record in the PMSS Collections, dated May 23, 1928, Luigi Zande sold Zande House to Pine Mountain Settlement School after Ethel’s death.

Luigi left Pine Mountain at the end of June in 1928. At that time Katherine Pettit wrote a letter of appreciation to Luigi. Her words describe his extensive contributions to the School’s built environment during his 14 years as a stonemason, builder and teacher:

Ever since I went over the school grounds and buildings with you yesterday, I have been thinking of what a great work that you did in the fourteen years that you have been here. I just marvel that you have been able to accomplish so much by untrained student labor. It was all made possible by your “sticking to the job”. Year after year you have been right here, oftentimes without going away for a single day.

When you began the addition to the Infirmary last year, with just two boys who could hardly drive a nail straight, who had never done any stone and cement work, I wondered what kind of faith and courage you had. But here it is all finished and ready for use. And here are all the other sixteen buildings that you, with oftentimes only the student labor to build them, have all ready and in good order for us to use.

Surely we can go ahead now and have a good school, since you are leaving us so well equipped and everything in such fine shape.

We will do our best to keep things up as you have taught us.

It can be imagined that the Pine Mountain staff would go on to miss Luigi Zande for years to come, as he was well-liked and essential to the operations of the School. Such sentiment was expressed in a letter to him from Angela Melville on May 10, 1930:

I do hope that you will soon find that home for which you are looking, and that it may be a very happy place for both of you and the children. I am sending off the gift which your friends here are giving to you and Mrs. Zande and we hope you will both like it. It was woven in our own weaving room by one of our girls [Maxine]. We hope it will bring only happy memories to you from those who think so much of you.

Another PMSS worker, Caroline Heinz from LaSalle, Illinois, became a good friend of the Zande family while serving as secretary and housemother at the School from 1925 to 1927. When she returned to Illinois, this time to Chicago, she corresponded with Luigi after Ethel’s death, assisting him in negotiating the changes he and his children had to face.

Luigi left Pine Mountain, Kentucky, at the end of June 1928. He then spent several months in Wilmington, Delaware, possibly with family members. In October 1928, he moved from Wilmington to Asheville, North Carolina, for a job with the American Enka Company. Founded that same year, the company was a manufacturer of synthetic yarn such as rayon. He also worked as a civil engineer and builder in Asheville, continuing to use the skills he had honed at Pine Mountain.

During this time, Luigi and Caroline continued to stay in contact. They married c. 1930, at which time Luigi’s children, Elena and Alberto, joined the couple in Asheville.

Luigi and Caroline returned to Pine Mountain Settlement School at least once since they left the School, as mentioned in a letter to Luigi, dated March 20, 1953, from Burton Rogers, then PMSS Director:

It was a very great pleasure to make your personal acquaintance last fall, after many years of anticipation. I wish that I could have met Mrs. Zande too, since I missed her brief visit here at Pine Mountain year before last. Let me assure you that there would be an especially warm welcome for you both if you ever feel like returning for a visit at any time. So much of your work here still stands, and we are daily thankful for it.

Alberto Zande was born on March 19, 1919, in Louisville, Kentucky. He spent his first ten years at Pine Mountain Settlement School where his mother, Ethel de Long Zande served as co-director of the School and his father, Luigi Zande, worked as a stonemason, builder, and teacher.

He attended North Carolina State in Raleigh and served in the U.S. Army during World War II.

Alberto became president of Southern Tool & Die Company, manufacturers of stampings, dies and special tools, at Asheville and lived in nearby Arden. He died on January 12, 1998, in Asheville.

Elena Zande was born on December 28, 1922, in Missouri and adopted by Luigi and Ethel Zande as an infant. She was educated at St. Mary’s Seminary in Maryland. In 1947 she married Barney Beigel at Santa Monica, California. The couple had two children: Roline Beigel and Margaret Beigel. 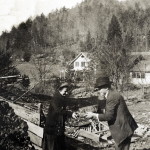 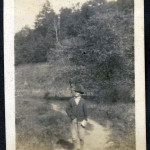 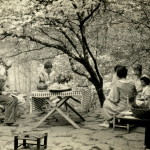 Workers on the terrace at Zande House. Luigi Zande to left. Dogwood in bloom suggest this may be part of Dogwood Breakfast, a tradition at the school. [X_099_workers_2527ee_mod.jpg] 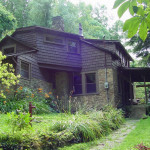 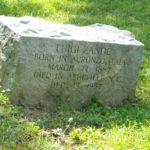