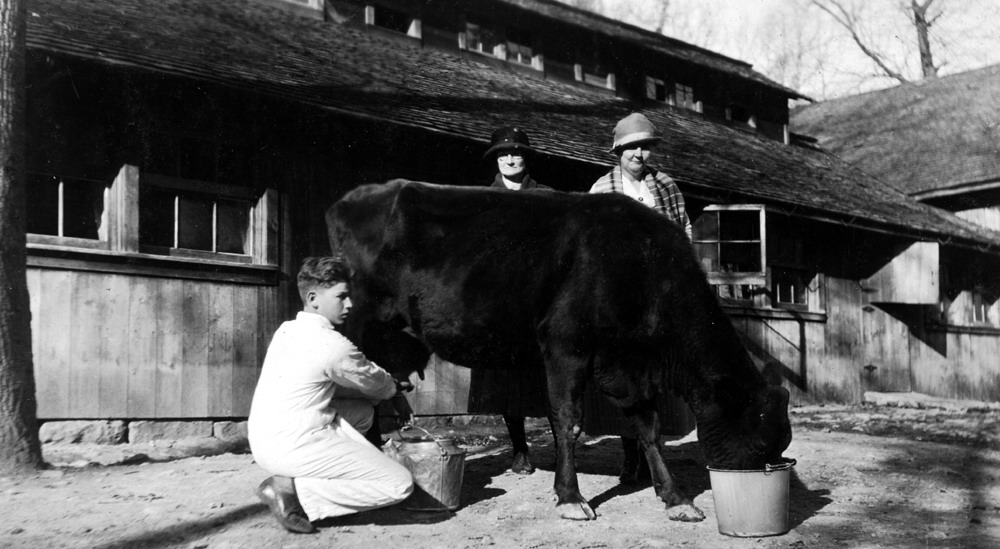 Martha Burns’ qualities must have included sturdiness and a keen knowledge of farm animal maintenance. Those attributes would have been needed to smoothly run a barn full of Ayrshire cows, milked twice daily by the students, as well as teaching dairying and overseeing the poultry division (the “hennery”). As the “Dairy Woman,” at Pine Mountain Settlement School in the 1920s, she was indeed known for her many years of good work and her devotion to educating the School’s students whom she supervised.

…A daily duty is the milking. Mrs. Burns is rightly proud of her well-kept modern barn and her Ayrshires, but she let us drive the cows out for a milking picture so that you might see them. You may judge that the boys who do this work are proud of it when you learn that in January the dairy supplied the dining room with 12,379 pounds of milk from sixteen cows. We didn’t realize how much it was until we thought of it as six tons!
[dear_friends_1930_04_002] 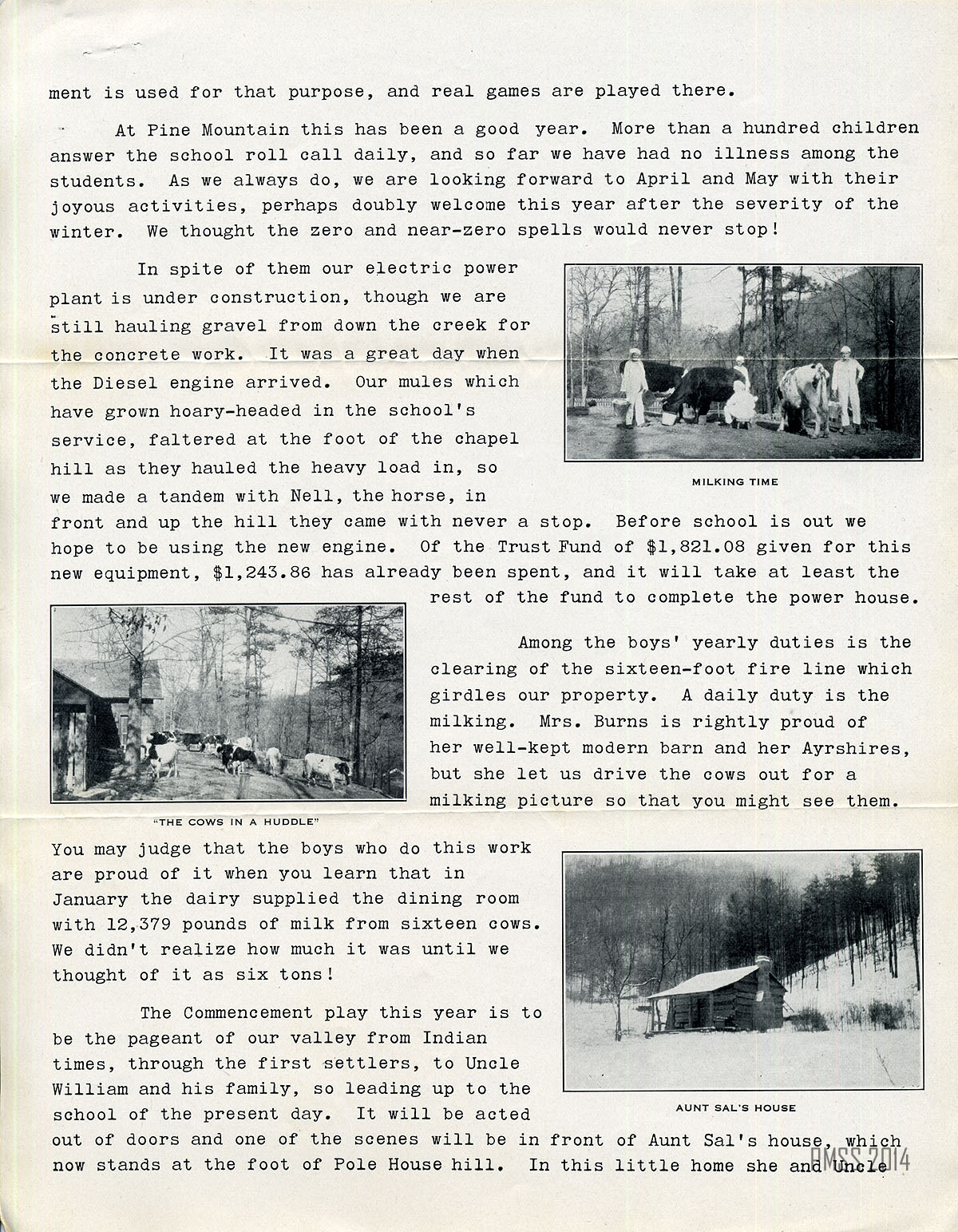 I don’t believe I have written you since Mrs. Burns moved into the “Cabin.” It is the cutest place you ever saw, and almost every worker here has asked Luigi [Zande] when he will build them one like it. His reply invariably is, “When you are married.” He should, to be consistent, add “and widowed” (or divorced!)
[martin_009.jpg]

Harriet Crutchfield, a fifth-grade teacher at Pine Mountain from 1928 to 1930, also mentioned Mrs. Burns’ home and farm activities in a letter to her parents:

Mrs. Burns, a woman of about 55, is a mountaineer and quite an unusual person, as she is crazy about Miss [Marguerite] Emerson and doesn’t live far from here, in a cute little one-room cabin of her own. I see quite a bit of her. She is in charge of the cows & chickens and they say her domain is a sight to see. I haven’t gotten over there yet. She works her head off and everything is as neat and clean as a pin. We have 16 cows now.

Mrs. Martha Burns has been supervisor of the Pine Mountain Settlement School Dairy for several years, during a period when the herd was building up from small beginnings. She has been an enthusiastic worker in her department, sensing to the full its importance both in the health of the school in providing abundant, clean milk and in educating the boys and girls in the care of the cows. She has also had charge of our poultry and has been successful with them.

Mrs. Burns leaves us with the goodwill of the entire staff of workers, and their admiration of her uprightness and their belief in her deep interest in the welfare of the young people of the Kentucky Mountains.
[Signed] Evelyn K. Wells
Acting Director

In the 1940s, Martha Burns supervised the farm at Hindman (KY) Settlement School. As indicated in her correspondence, she stayed several weeks at Pine Mountain Settlement School as a visitor in 1961, when Burton Rogers was the School’s director.

On the PMSS campus, Martha Burns, a widow, was better known as “Mrs. Burns.” She was born c. 1880 in Kentucky. 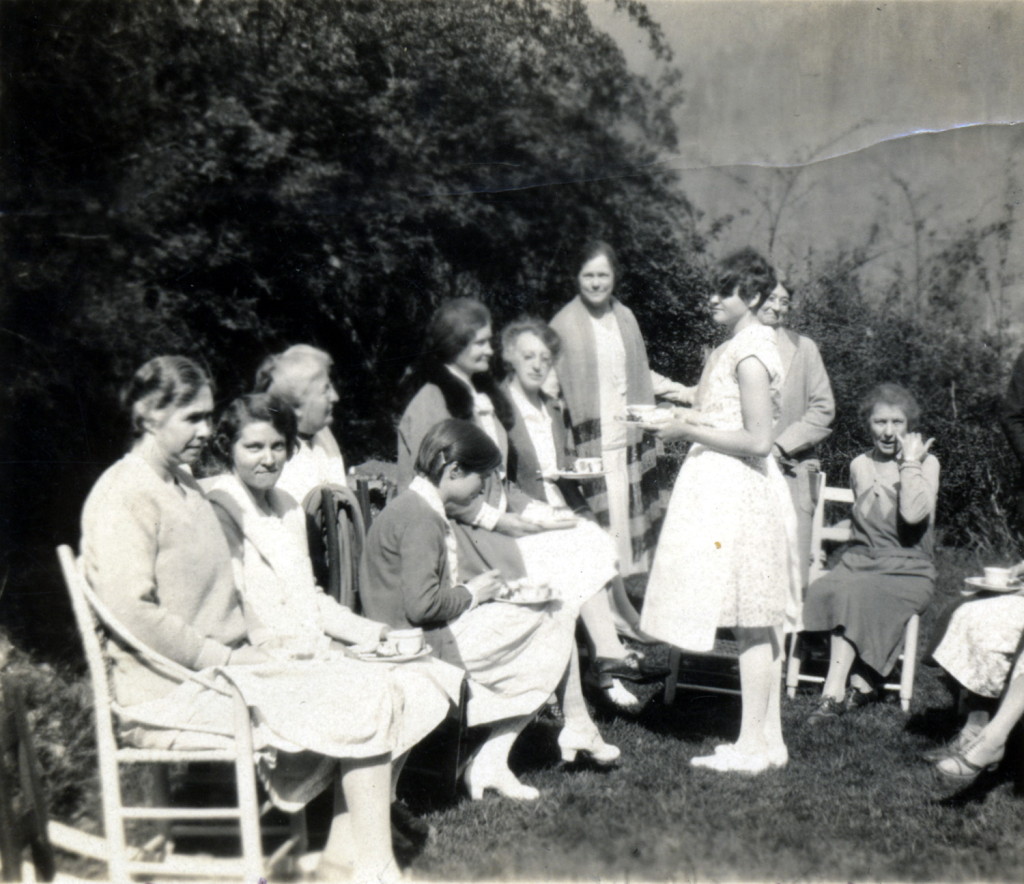