As part of preparing for displays for the 1949 Community Fair Day, Ella Wilder, daughter of Brit Wilder (who was a grandson of Uncle William Creech, and a farm worker at the School) took a walk with the author of this short story. The author, who is possibly Alice Cobb (though Miss Spinney is written in pencil at the top of the transcript page) or possibly Dorothy Nace, took a walk with Ella to gather unique “antiques” from members of the community. The items were to be placed on display at the Community Fair Day that took place at Pine Mountain School each Fall. The walk-about also was a sneaker advertisement to get the community to the Fair. It also served to establish better relations with the community for, as the author explains, the earlier “Community Fair” was felt to have “grown into a day in which the School put on a show for the neighbors, rather than a day in which the neighbors had the floor.” The narrative of this walk-about is very candid in its description of the trip and the observations of the local community. 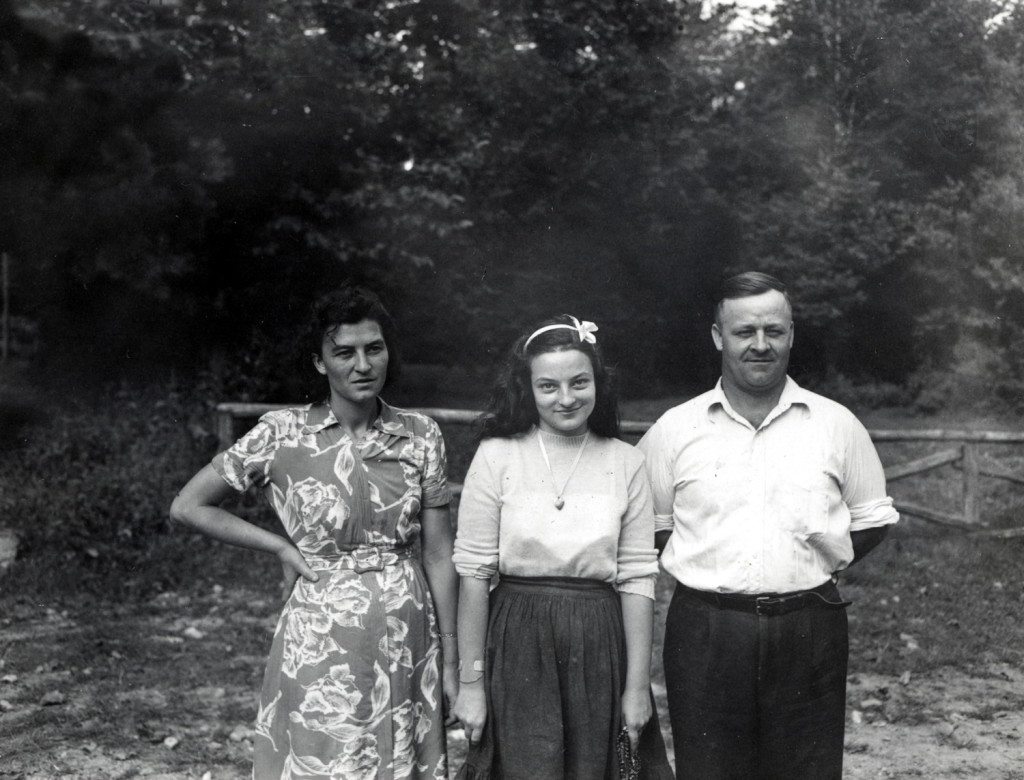 My job of “publicity” meant getting it on the front page of the [Harlan Daily] Enterprise, but what was more important getting it in the minds and expectations of our neighbors. I spent literally days up and down the creeks announcing and talking it at Isaac’s Creek Sunday School, at Little Laurel Church, at all the post offices, at every public gathering [I] could get to, and spent a day walking to Medical Settlement stopping at every house along the way to leave the premium list, and to urge the family to bring canned fruit and vegetable. Another day was spent hiking over Steel Trap to the head of Little Laurel with Ella Wilder and then back to the mouth of the creek, collecting small antiques and urging them all to come.

That was really a day out of Eden. If you know Ella [Wilder], you know what a strong silent sort of person she is. One has the feeling of still water flowing deep. There is so much behind and beyond those quiet steady eyes, and the occasional quick lighted smile. She’s like Mona Lisa. I remember that as we waded up the gap (literally waded because it was pouring rain overhead, and the trail was lifely [sic] little cascade all the way) we got on the subject of the war, and why it had to be and what the purpose was, and I found myself — skip the rest —-

By the time we reached the top of the ridge the rain had abated which was fortunate because we weren’t protected by trees going down the other side. It is quite bare, perhaps because of forest fire. We went first to Rhoda Wilder‘s little house — my first trip there since a trip Barby Wilbur and I made ten years ago. Then we found Rhoda doing her washing in the backyard under the apple tree, and little Rosy cheeked tow-headed John hanging it out on the line, as pleasant a washday scene as one could wish to look at. John drew us a cold drink of water from the well and brought us each a red apple.

Now the little house sort of gaped open. No one lives there, and it is all haunted by the love and laughter and stark tragedy that lived there years ago. We walked through the empty rooms, picked up an old boot that belonged to Brit when he was a little boy, a tattered book that Ella remembered reading once and which I had read, so we told it to each other. We saw the crude wall cupboard which Uncle William himself had made for Aunt Sal — crude, but so graceful, because the things made by hands have the worked over lines that no machine can match. We had an apple from the same old apple tree, crisp and tart.

Here the Wilder children, Sally and Cindy and Brit and Kern and Polly had played and loved and rejoiced, here Miss Pettit and Miss de Long had come to call in the old days. Had come loneliness and desertion when Henry Wilder took … [missing]

We went from there along the valley to the little log house which Brit and Ella, seventeen and twenty, [a] runaway couple, had come back to build with their own hands. They call it the Rat House because the rats have taken possession now. I remarked to Ella what a Chinese philosopher (I think) had said — “no one really lives until he has built a house, written a book and borne a child.” (Not quite sure of this!) She said thoughtfully, “Well Brit and I have got the book to write! and then with a quick smile “You’ll have to help us write the book!”

In the front room, really the one room, was the stone fireplace they had built up together, raising it stone by stone with a crane — Ella pulling the pulley rope, Brit on the ladder receiving the mounting block of stone and putting it in place. Together they had stuffed the cracks between the logs with mud. Together they had laid the long hand-cut shingles on the roof, which sloped gradually on the creekside, making room for a wee kitchen and sleeping porch beside the front room. The roof had fallen over the kitchen, but the wee step stove was there, turned over on its side, mute tongue telling of many a cozy before daylight breakfast and bountiful dinner and supper cooked there. Now the logs had fallen away, but we looked out the window that was down the valley, in the direction Ella used to look at sunset time to see if Brit were coming home yet.

This was the house where Barbara [Wilder] was born, and where she very nearly died. Ella told me how they carried her in their arms over Steel Trap to the Pine Mountain hospital. “She would cough and gasp something awful,” Ella looked sick as she remembered. “I was so scared I thought I’d die myself.” She smiled again and said, “Yes, if all these logs could talk, they could tell plenty of stories!”

We had our lunch on the hillside near her own special apple tree. She liked it because she watched it grow from a little tree, and the apples “was so good!”

We found Mrs. Marsh Browning drying apples over a slow fire in the yard by the creek. The fireplace was a stone platform covered with a trough. I tasted one of the dried pieces. It was chewy and smoky tasting, like nothing else except an apple dried over an open fire.

Mrs. Jim Browning [Mattie Browning] and all her children were on the front porch. Jim is the local lay preacher, a really good and hardworking man, with a knowledge of scripture that’s amazing. The first reply when we asked for antiques, was as in all the homes, “No, I reckon we ain’t got nothing very old.” and then after talk and remembering, they began to come out — the tomahawk that Jim’s grandfather had got from the Indians when he was a boy; the old plate that was Mattie’s mother’s wedding present close to a hundred years ago.

At Lige Lewis’s house we found a walking stick made by Bennett Hall. Beautifully carved in a sort of braid, from a black walnut rail that he got off a rail fence made by Uncle Jake Smith, who was Aunt Sal Creech’s brother in law. There too we got from the attic an ancient coffee grinder owned by Mrs. Lige’s [Lewis] grandmother. I carried that home in my two hands along with a load of pine knots.

So all along the way we visited, and when we were not in homes we were trudging the most beautiful trail I have ever walked, even in these mountains. At one place we went down the hill a ways to the meeting place, where a clearing and some log benches told of many a meeting with local and visiting preachers, and picnic lunches. This is probably the most truly indigenous social function of the mountains — the mountain version of the N.E. [New England] town meeting, maybe, but of course strongly religious.

At one point I round the place for my house of dreams, and ruthlessly cast aside the Pine Mountain apple orchard site. It is a place on the side of the hill which looks straight across the gully to the place where Rhody Wilder’s lonesome house stands and looks up to three converging mountains. On this day they were dimmed with purple autumn mist, through which timid sunlight peered, lighting and resting over rich autumn red and yellow and brown treetops. It was very beautiful with the talking beauty of our mountains (they crowd up close and are sociable!) and I left my heart there as we went along, with a promise to come back soon.

At the mouth of the creek we stopped at Chester Jackson’s house, and there met Miss Spinney who had come with her car to pick up some larger articles at Ben Lewis‘s. There we went off with the spinning wheel which Aunt Sal used herself, and with her churn, her piggin, and her pot hooks. We had a talk with Juny, the youngest of Uncle William‘s grandchildren, a former Pine Mountain student.

Another creek trip took me onto the Divide, where I found some of Aunt Louezes‘s [Louise, wife of John Fiddler?] trophies, another down Greasy where we discovered the little old bed that Uncle John Shell made for Aunt Sis when they got married about 80 years ago, although no one really knows.

By 1949 the Community Fair Day at Pine Mountain Settlement School had become a much-anticipated Fall ritual in the community of the Pine Mountain valley. Word had spread across the mountain to the valley of the Cumberland and many Fair-goers also came from Harlan, Cumberland and other small towns along the Cumberland River to enjoy the displays, the barbecue, dancing, and games.

The November 1949 issue of “Notes from the Pine Mountain Settlement School” reported on the success and future of the 1949 Fair Day:

This year the Pine Mountain Fair was truly a community venture. In the past leadership has been assigned to staff members assisted by students. This year we asked our neighbors to help and found them more than ready to shoulder the load of preparation — planning and serving sandwiches, coffee, cake and ice cream for a crowd of three or four hundred. Older pupils offered eagerly to help at the sales stands and afterward all the children staged a grand cleanup which swept the grounds bare of any sign of Fair Day litter. One of the neighbors is chairman of next year’s Fair. This is the first time a staff member will not have this position.