Alonzo Turner was dubbed the “Folk Dancing Ambassador” by his local newspaper, the Harlan Daily Enterprise, for a good reason. He was well-known for spreading knowledge and enjoyment of Appalachian folk dancing to people near and far throughout his life.

Alonzo’s exposure to folk dancing began at an early age. He grew up surrounded by family members who called dances at Pine Mountain Settlement School and community gatherings. The Turner Family is mentioned by Peter Rogers in an account, written in 1997 and expanded in 2000, of a visit by Cecil Sharp, an English musicologist, in 1913:

…the family of Alonzo Turner, who lives about 6 or 7 miles out toward Bledsoe was very active in calling sets at Pine Mountain. In a letter dated October 13th, 1913, Ethel de Long describes going to several different parties in the community — each at a Turner home. Alonzo recalls that both his father, John, and his uncle Creed, called dances at Pine Mountain as well as at homes. 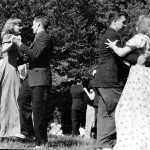 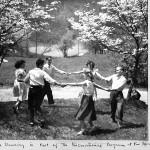 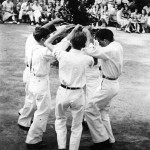 Sword Dancing, the forming of the star. [III_campus_life_0779a.jpg]

Alonzo’s interest in folk dancing was further nurtured at Pine Mountain Settlement School. There, traditional music and dance played a significant and integral role in the students’ education as well as in the extra-curricular activities of the students, workers and community. As a boarding school student from 1929 to 1936, Alonzo became well-acquainted with the Kentucky Running Set, sword dancing, Morris dancing and other dance forms brought to the mountains by settlers of Scottish and Irish ancestry and preserved by the School.

Alonzo was active in several areas of the arts at Pine Mountain. In a program for the student presentation of “H.M.S. Pinafore” in November 1940, he is listed as playing a part in the W.S. Gilbert & Arthur Sullivan’s operetta. The Pine Cone of 1936 reports that he was in the Senior High cast of “The Valiant,” a one-act play by Holworthy Hall and Robert Middlemass. In addition, he was a member of the PMSS dance team and, in 1934, part of the student staff that published The Pine Cone. 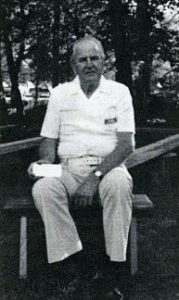 In later years, Alonzo had a busy life that included operating a saw mill and coal mine with his father and brothers and serving as a constable for 16 years to support his wife and growing family. However, Alonzo found time to continue his interest in folk dancing. According to his Harlan Daily Enterprise obituary, dated August 24, 2002,

Turner is best known throughout Harlan County and surrounding areas for his love for teaching folk dancing to people of all ages.

He also traveled to Washington, D.C., and performed for former President Franklin D. Roosevelt and conducted a program for Henry Ford.

Turner took a group of dancers on a tour of Europe to exhibit Appalachian folk dancing.

He was recently recognized by Southeast Community College [Cumberland, KY] by having a dance program created and named in his honor.

Brochures for the PMSS Homecomings for 1979 and 1981 describe Alonzo’s contributions to the reunion festivities by joining in the Sword Dance or calling the Kentucky Running Set. At the PMSS Homecoming of 1983, former student Jane Bishop Hobgood presented a surprise honor to Alonzo Turner and recorded it in the Homecoming brochure:

In Appreciation to Alonzo E. Turner

We gratefully recognize Alonzo’s many years of dedication in teaching Country Dancing at Pine Mountain.

We know he has given of his time and talent with no expense to the school, teaching the dances to the various groups in sessions on the campus. He has furthered our heritage to the far reaches of our country and we wanted him to know of our deep gratitude for his love and concern.

We hope he enjoys the beautiful butternut fireplace bench made by that master craftsman, Bill Hayes.

Keep on with the dancing and running those sets, Alonzo!

As late as 1985, Alonzo was still on the go. The December 1985 issue of Notes reports the following good news:

COMMUNITY The Pine Mountain Country Dancers have been chosen to go to Denmark this summer on the Danish-American Exchange. Twelve of their group as well as adults: Alonzo Turner, long time country dancer; Carol Urquhart, community worker; and Nancy Garber, musician and former Pine Mountain intern, will travel to Denmark for three weeks of exciting times. They have planned a program of dance, music, and stories to depict our Pine Mountain area and history. [Kentucky Running Set], Jenny Pluck Pears, Aunt Sal’s Song, The Cuckoo, Levi Jackson Rag, and many more of the group’s favorites are being rehearsed furiously every week after school by the young dancers.

According to Peter Rogers’ 1997/2000 report, Alonzo “continued to support the dance program as his own children attended the community school [at PMSS]. Until the last few years, he has helped lead dances for groups attending the environmental education programs and usually closed by calling a set.” 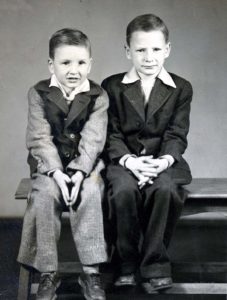 Alonzo Edward Turner, Sr., was born on May 31, 1915, the son of Alice and John L. Turner and the oldest of four children. His siblings were Christine, Cleo, Lloyd and Mildred. Alonzo grew up on the small farm at Laurel Creek that his family owned.

The 1979 Homecoming Report tells the following story about Alonzo and his children:

The round tables go up and back against the wall. Pine Mountain Alumni & Friends prepare for another Dancing Party. Alonzo Turner is there to call the Kentucky Running Set. When he arrives he calls attention to a long line of cars winding up the Laurel House driveway. “Those are my children. I told them it was time they started coming too.” And what a handsome crew they are!

Alonzo lived all his life in Harlan County, Kentucky. He and his wife lived their last 50 years in the family farmhouse.