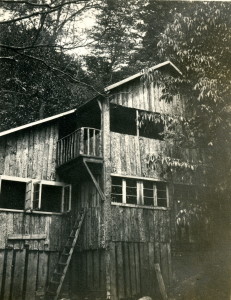 Open House was just that, always open to visitors and full of air and light. Designed by Mary Rockwell Hook, the principal architect for the School, the house was designed in the summer of 1919 to serve as a personal residence for Hook while she was at Pine Mountain. Ethel McCullough and Margaurite Butler, two Pine Mountain staff members, also wanted to build at the School and they shared in the ownership of the building for many year. But it was Hook who, for most of her life, came to the School for at least some weeks in the summer. Often, she had grandchildren in tow or friends or relatives who joined her.

When she died, the house and the land became the property of Pine Mountain Settlement School. The building burned in 1972 as the result of an unattended fire in an exterior fireplace.

The house was of frame construction with a siding of slab lumber, generally lumber rejected at the mills, as it contained “imperfections” such as bark and knot-holes. The plan was a two-story structure with a large living room and fireplace elevated for cooking, a small kitchen area and a lower sleeping porch in the back of the home. The upper level contained a large sleeping porch that had open windows on three sides that looked out into the dense forest that surrounded the building. It was a cool and hospitable home in summer but was not suitable for winter living as it had no source of heat other than the interior fireplace on the lower level.

Hook had the assistance of local men to bring her plan into reality, in particular, the two sons of Uncle William Creech who were skilled carpenters and builders. The Creech Letters include the following note:

At the rear south side of the home, there was another fireplace that was an outdoor cooking area that adjoined a terrace. From this area, there was a short path to Laurel House that allowed for easy access to meals at the central dining area of the campus if needed.

Rustic, spacious, tranquil, and spartan in furniture and decoration, the house blended well with the environment. Often there were lovely blue Mexican glass pieces set about that held summer flowers or fall leaves. Many of the furniture pieces were of Mary Rockwell Hook’s design. She and her sister were avid furniture designers and the pieces reflected some of their earlier work.

Some of the images given, as in the collection of “cobb” [Alice Cobb, PMSS Secretary] at Pine Mountain, may be from those donated to Pine Mountain by Hook from the photographer for the L’Heureux article “Well Connected” in the Urban Planning & Architecture, volume 8, pages 78-83. The complex wanderings and attributions of the Open House photographs have not been fully resolved.

[NOTE: Attribution research is still underway for some of the early images of Open House, particularly the interior photographs.]

In her autobiography “This and That”, written in 1970, and dedicated to Burton Rogers, Mary relates that

When I was given an acre of ground at Pine Mountain, I started making plans for the house I would build. Ethel McCullough and Margaurite Butler also wanted to build a house for themselves, but I suggested that we build one house for all three of us. It was a two-story house, with a sleeping porch and dressing room for each of us, and a studio for me. I called it “Open House.”

Mary Rockwell Hook writing to Glyn Morris in 1932 describes her Open House for him:

I was quite delighted with the appreciation of Open House shown by the writer of the article you sent me.

If you ever see him again, I wish you would tell him that I know he is a poet [?].

The House always seems to me a place of enchantment, I love every bit of it.

The man who built it for me called it the “Scrap House” because I used the ends of the logs left over for Big Log and the slabs were used to burn to run the sawmill [boiler]. We cut the rafters and studs and Uncle William stood over us to be sure we skinned them. The site was covered with blackberry bushes as tall as the rocks and I cut them out myself. Every bush fought for its life by attacking me in some vulnerable spot. ….

Perched high above two large rocks, against the bosom of Pine Mountain, stands Open House. Its surroundings are silent save for the rustling of autumn leaves and distant sounds. The front door stands open revealing the cozy little living room, heated by the open fireplace.

Open House was built in the early spring of 1916 (sic) under the supervision of Uncle William Creech. The acre of land upon which it stands was given to Mary Rockwell Hook by Miss Katherine Pettit and Ethel de Long Zande. The building materials were financed by Marguerite Butler, Ethel McCullough and Mary Rockwell Hook for their enjoyment and that of summer guests of the school.

It was made from the ends of the logs left over from Big Log House, poles cut by Columbus Creech from the mountain and pieces of lumber from the saw mill.

In the early years Miss Butler and Miss McCullough gave their interest in the house to Miss Pettit, who later left it to the school.

Today Open House is one of the lovely spots of Pine Mountain, noted for its simplicity and its rustic furniture, pottery and weaving.

The signature elements of Hook may be readily seen in the house built on a small plot of land on the Pine Mountain Settlement campus. Mary Rockwell and two of her colleagues, Marguerite Butler and Ethel McCullough, apparently leased or simply paid for the construction of a house would sit among the other buildings of the School. Apparently she shared ownership of the house with two other Pine Mountain staff women who took the opportunity to utilize their combined resources to produce a house to be used for themselves and for visitors. The house was given to Pine Mountain late in Mary’s life though the details of the ownership transfer are vague in the Pine Mountain record. When the transfer took place, Mary, apparently, was the sole owner at the time.

Designed as a summer residence, the rustic house, which Hook named” Open House, ” was constructed partially from recycled remainders of stone and wood from the many building projects at the School. Hook frequently spent her summers in the house. It was a large, rambling structure that also accommodated the many guests who often visited the School with Mary or Marguerite or Ethel, or as guests of the School, when the builders were not in residence. The home relied on fireplaces for heat and cooking and had two exposed sleeping porches to the rear of the structure. 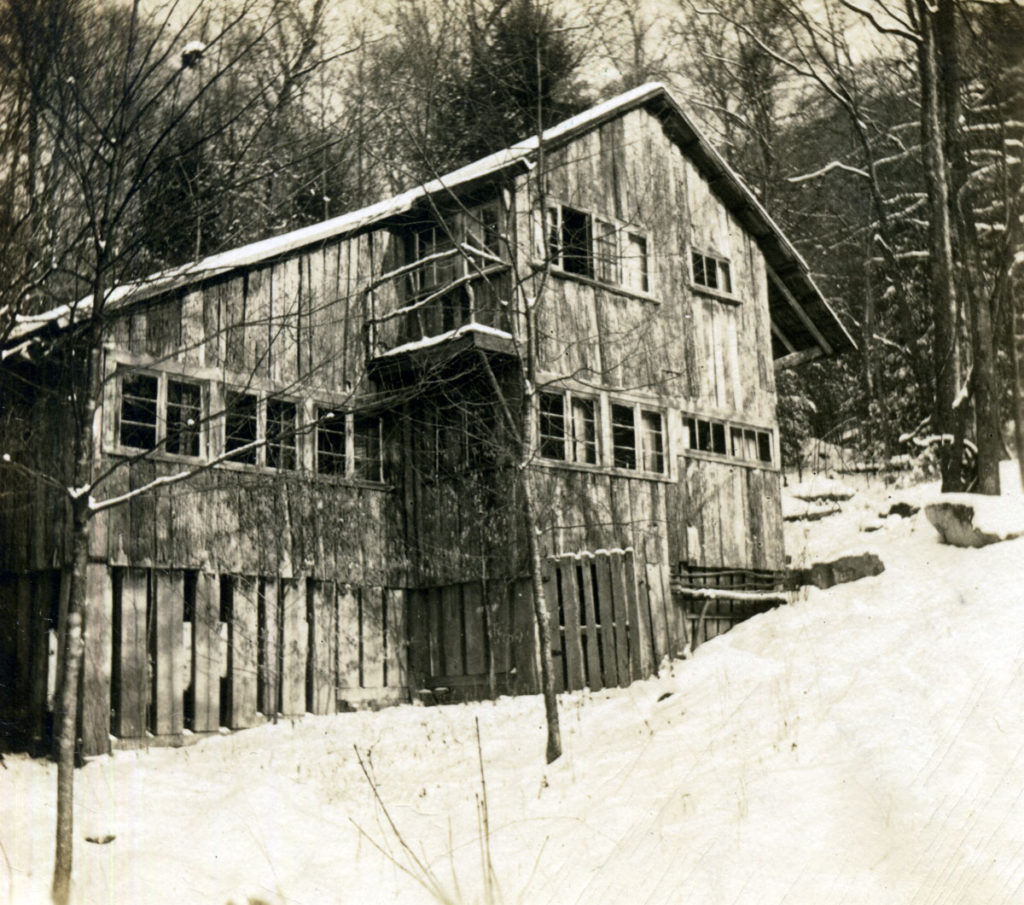 ” …and the hospitality of Pine Mountain will fill you with a glow, Glyn Morris will guide you to the ‘Open House’, a guest cabin, perched on a big rock with its screened sleeping porches jutting over the very jungle. This house will interest you from the front porch to the second floor. Everything brings an artistic adaptation of “local to locality” — slab sides, rafter poles, stone fireplaces, woodcraft in evidence at every turn, plenty of the homespun, and fragrances of the forest pervading every room. You would go wild about this house. It seems to have grown of its own vitality from the rocks and woods. And so secluded is it, back in the white rhododendrons and ferns, that even Glyn Morris (the then Director of the School), leading us by flashlight, could hardly find it, along about “Whip-poor-will hour.”

The house today cannot be found at “Whip-poor-will-hour” or any other hour as it was consumed by fire in c. 1972 due to poor monitoring of a fire in the exterior fireplace at the rear of the structure.

Today, only the interior fireplace and its chimney stand in the forest just to the East of Laurel House, as a lonely reminder of the many happy days that were spent there. It was a house where so many staff, students, and visitors enjoyed the beauty of the architect’s well-designed structure and its integrated woodland site — a testimony to the architect’s sensitivity to “place” that shines in all her buildings at the School. 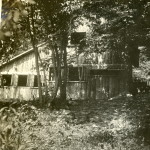 Open House. View of the south flank of house. hook_043a_mod.jpg 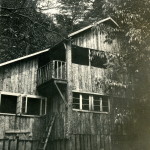 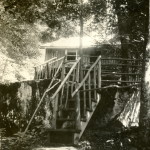 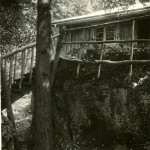 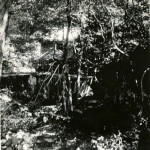 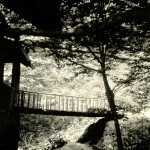 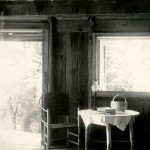 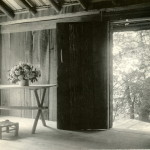 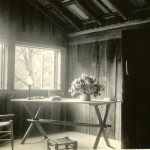 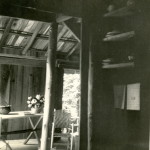 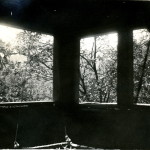 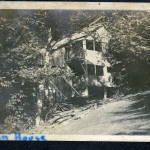 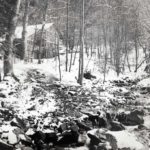 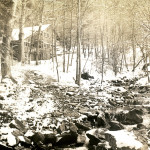 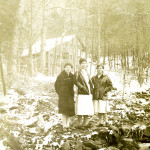 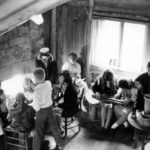 1809g Party in Open House near fireplace. 58_Life and Work_Children and Classes_025 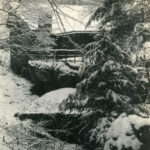 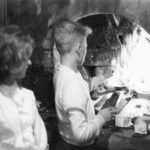 1808 Jimmy Turner in front of fireplace at Open House with girl looking on. [58_Life-and- Work_Children-and-Classes_017.jpg] 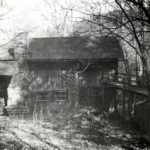 Open House, seen from the rear with ramp to second floor. [cobb_alice_024.jpg]

Back to BUILT ENVIRONMENT Guide