From the gathered notes of Mary Rogers, Evelyn Wells, and various director’s reports, we learn that “Far House I was designed and built in 1914-1915 at a cost of $5,036. $1,000 came from Mrs. William Pettit in memory of William Atchison.” It was the third dwelling constructed by the School and it took its name from the distance from the first two structures, Old Log and Big Log. Unlike many of the other buildings, designed by the campus architect, Mary Rockwell Hook, Far House I was largely planned by Ethel de Long who exchanged ideas with Hook. The building planned as a dormitory was used as a dwelling by Ethel de Long until her marriage to Luigi Zande in 1918, and the construction of Zande House, on the mountain just above Far House I.

In September of 1914 Mary Rockwell was contacted by Ethel de Long Zande regarding her plans to build the new residence building:

[Ethel:] We are finishing 3 buildings, beginning a 4th, working on course of study. Miss Rockwell and I working on plans, etc, etc, etc..

Here I am at Kansas City … I go Friday night for Pine Mt.!! Must now work on house plans.”

[Pine Mountain:] I’ve begun another house, since my return to Pine Mt. A wonderful location.”

By the summer of 1915 Hook [?] describes the progress on Far House:

The new house has its foundation about done. It’s just back of the Pole House — on a little spur of the mt. — a lovely spot. I can hardly wait for it to be finished so as to move in.

My dear — the Far House is a dream! Not a palace nor yet a residence — but a dream, of views and closets! It has closets for brooms & closets for scrubbing pails, closets for nightgowns & closets for blankets, linen closets and dish closets — closets for vases and closets for newspapers — even some closets born for what know not what end as yet — dressing room closets — closets, closets, water closets & tool closets & store closets — you could write a book in its closets & the windows in 5, no, 7 of them !!!!!!! Also, the house has rooms — lest you fear I’ve put all the space into closets! My room is paneled in broad poplar — the living room in broad oak, very pretty indeed. I can hardly wait to get up there and good finishing is so slow!

By the summer of 1915 Ethel de Long was living in Far House and she made these observations:

I am aiming to have some other cute things / besides kittens / in the Far House (adjective describing relation to other houses). Two motherless girls, aged 2 yrs & 4 yrs. Frances is looking forward to taking care of them, & I shall have a big girl too, so I hope, between us, they will be well-brought up, unspoiled children. The Far House by the way is approaching completion. I think it will be quite lovely, & hurry it in every way I can — it will be so lovely to have a room of my own once more & to live in a house with a sitting room! [She lived in Old Log.]

Finally, on September 1, 1915, de Long spent her first night in the new residence:

My first night in the lovely new house! and just before I go to bed — having straightened out my desk all ready for the busy hours tomorrow. I must pop my love into this letter to my dears. I must tell you how lovely it is when a more convenient season comes — but it’s like the New Jerusalem in one way — nothing unclean has entered into it! The children’s beds have two clean sheets apiece — & blankets freshly washed & new counterpanes — & they are all, every last one of them in clean nightgowns with clean clothes promised for tomorrow & I’ve had a hot bath & c. [clean] clothes & now doesn’t that sound like the New Jerusalem? The house does — anyway — on its lovely hilltop, quite the beautifullest site on the place, next to the Pole House — at least. It’s not finished yet, indeed, only the children’s rooms & mine are done, but will be a thousand times cleaner & easier for me. Oscar Begley says I’m just like [?] his brother Thee when he swaps a mule. When he gets it, it’s the finest critter ever was in the world — when he’s swapped it off — ‘Hit wasn’t no good, no how!’ This is supposed to describe me in reference to houses!

In 1917 one of the most important events to occur at the School took place on the terrace of Far House I. The event marked a milestone in the revival of folk dance in America. It was here that Cecil J. Sharp and Maude Karples witnessed the performance of the Kentucky Running Set, a dance form unique to the area and unknown to Sharp and Karples.

As recorded in an anonymous recollection written in 1995, the author tells us,

The high point of the visit occurred on the evening of August, at a party held on the upper terrace at Far House, when Sharp saw for the first time the Kentucky Running Set. Although he had heard of the dance in other places, he had the impression “that it was a rough, uncouth dance, remarkable only as an exhibition of agility and physical endurance.” That night, as he watched the dance unfold, he realized that it was something else entirely, a form of country dancing English in origin but forgotten in the Old Country.

“It was danced,” he wrote later, “after dark … with only one dim lantern to light up the scene. But the moon streamed fitfully in lighting up the mountain peaks in the background and, casting its mysterious light over the proceedings, seemed to exaggerate the wildness and break-neck speed of the dancers as they whirled through the mazes of the dance. There was no music, only the stampings, and clappings of the onlookers, but when one of the emotional crises of the dance was reached — and this happened several times during the performance — the air seemed literally to pulsate with the rhythm of the ‘patters’ and the tramp of the dancers’ feet, while over and above it all, penetrating through the din, floated the even, falsetto tones of the Caller, calmly and unexcitedly reciting his directions.” [The Country Dance Book, Part V. London: 1918. 14-15].

Being caught unprepared, Sharp did not note the dance until he saw it again at Hyden, but when he published the dance in 1918, he dedicated the volume to the school. The collection and publication of this dance was a crowning moment in Sharp’s career and remains of such significance that the Kentucky Encyclopedia in 1992 could call Sharp “the major figure in the history of folk dancing in the commonwealth.” 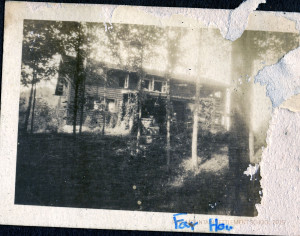 In 1922 Harriet Roe who came to the School as a Summer worker wrote this description of life in the residence:

There are a number of houses for the children, but I think I drew the pick of the lot, Far House … It has two broad porches, a lovely big living-room with fireplace, nice furniture, and books and flowers. A big spinning wheel sits in the hall. The boys have a large sleeping porch, and the girls have one right over it. Each child owns a closet and has a special place for washing. Over one of the porches grows a sweet-smelling honeysuckle. Big stepping-stones mark the path. There is a bathtub in the house, and hot water most of the time, but we have to use a Little House down the line.

I must not forget to mention the variegated Persian cat, Noel. She is a greater hunter, very friendly, but not affectionate, with a rattling purr. She is lying on the stone porch at this very minute scratching her chin, for I understand she has fleas. I haven’t seen any.

In 1942 Far House was valued at $7000. Also, by 1942, the building is described as “quite well worn out.” Its worn condition came from many years as a residence for boys — some twenty students — and for three workers. The description of the building in that year conforms largely to its original design. There were two sleeping porches, two dressing rooms, and one bathroom for all students. The bathroom, a new addition, consisted of a shower, wash sink, and two toilets. By 1942 the “Little House down the line” was no longer in use. There was also one bathroom for the workers. The large living room was shared by all. Originally, an enclosed bedroom was planned for students whose parents did not like the idea of their children sleeping on the open sleeping porches. Eventually, the open porches were enclosed and all students had interior rooms.

The 1942 report of the physical plant describes the living room of Far House as “quite dark,” and the sleeping porches and the dressing rooms as “too small for the number of students using them.” The 1942 report also notes that “With some repairs the house could be made to last several years more. By changing the sleeping quarters, making them into rooms, the wear and tear on the building would be considerably less.” Just what the extent of remodel might have been following that evaluation, is unknown, as remodeling and re-purposing of the building continued for many years after 1942.

The new Far House, built c. 2001, was proposed to be the new primary dwelling of the Director. For a time it served this function, particularly during the ten-year tenure of Nancy Adams, but proved to provide insufficient insulation from the campus activity in the very active West Wind close-by. Today, Far House II serves the campus programs as one of the buildings designated as a guest house. 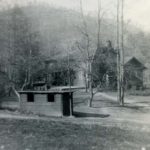 “End view of Far House.” With a ‘Little House down the line” in foreground. Birdena Bishop Album. [bishop_08_006.jpg] 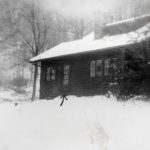 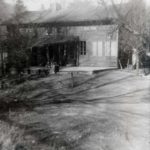 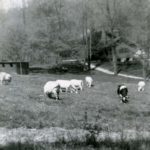 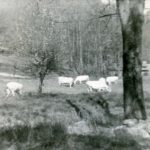 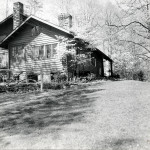 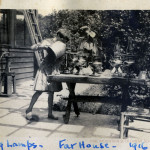 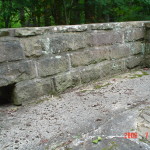 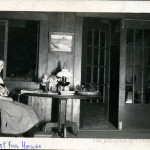 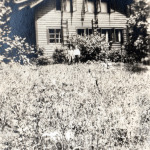 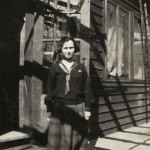