James Urquhart served as director of the Pine Mountain Settlement School during the three years (1983-1986) between the directorships of Alvin Boggs and Paul Hayes. At the same time, his wife, Carol Urquhart, worked as teacher of environmental education from 1983 to 1984, then as community service director in 1986. She succeeded her husband as interim director for a short time in 1986.

Announcing their arrival at the School, the Urquhart’s photograph was featured on the front page of the fall 1983 issue of Notes from the Pine Mountain Settlement School, with a message from James (Jim) Urquhart: 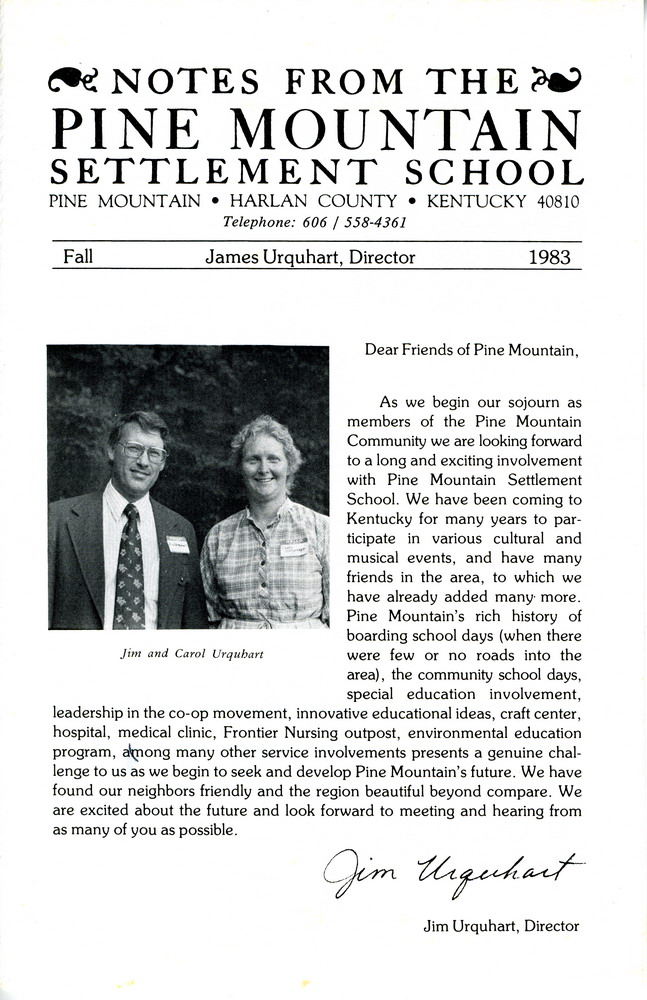 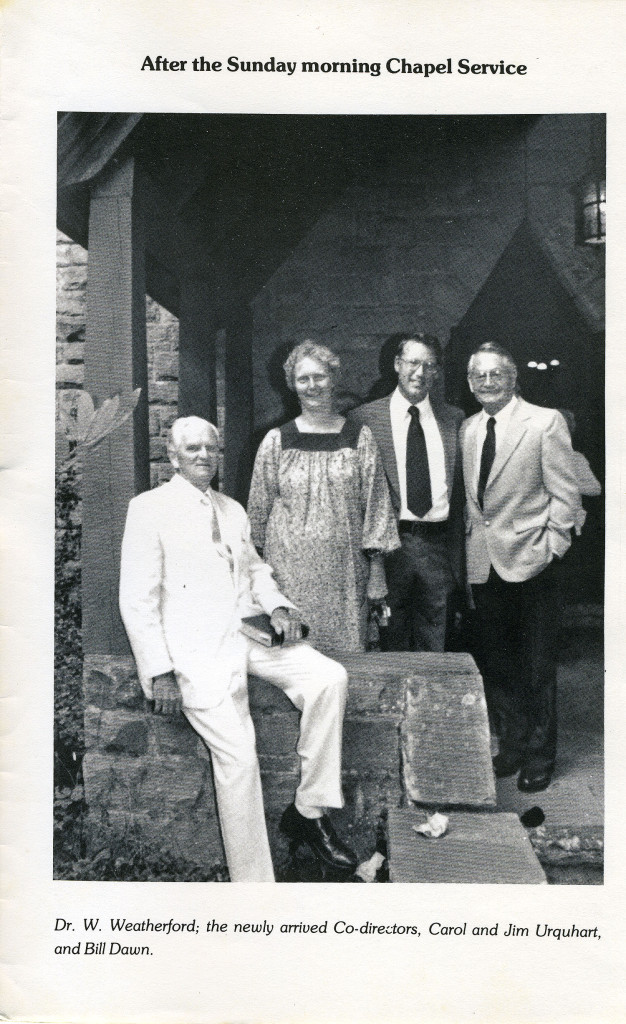 Under Mr. Urquhart’s directorship, two programs were planned to begin in Fall 1985 “in our efforts to function as a springboard to the future.” As he wrote in the Annual Report of the 1985 Homecoming (a newsletter of Pine Mountain Association of Alumni and Friends): 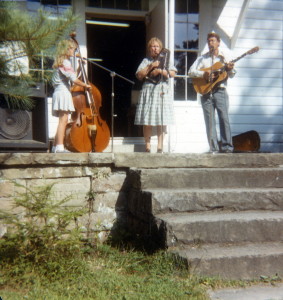 Two college-level classes (English, and Human Growth and Development) will be offered through Southeast Community College right here at Pine Mountain. Additionally, the Intervention Program will begin in the Library. This program is of particular significance, since it is aimed at correcting the school “dropout” problem in our immediate area. These two new programs will enhance our efforts to become important partners in all efforts to effect educational growth in Harlan and its surrounding counties.

Mr. Urquhart’s mother was also mentioned in the Alumni and Friends Newsletter:

If we had to say what we enjoyed most about Homecoming, we would have to say that, of prime importance was all that laughing and joking with Betty Urquhart (Jim’s mom).

A year later, Mr. Urquhart provided updates at the meeting of the Advisory Council to the Board of Trustees. His talk and the subsequent discussion by the Council were recorded in the minutes of that meeting as follows:

Ruth [Shuler Dieter, chair] introduced school director, Jim Urquhart, to bring the group up to date on latest developments at [the] school. Jim explained changes taking place, emphasizing a refocusing to meet expressed needs and stating this has always been a tradition of the school to alter the programs to meet current needs. He talked about the financial situation, the deficit and difficulty of attaining funds to pay bills, the restructuring of programs and personnel cuts as a result of the board’s decision of no more withdrawals from endowment principal. He explained the nature of the new program and staff, reducing the Environmental Education Program with only one staff naturalist and limited groups. Emphasis is to be placed on community education (GED, tutorial, computer training, etc.). … Jim was excused at this point.

The meeting continued in a period of free discussion as to how the Advisory Council can be of help. Ruth expressed the need for a representative on the board from the Advisory Council group and talked about board membership and residence. … It was suggested that it be recommended we ask for two representatives. A discussion followed about non-awareness of present board members of school concerns.

James Urquhart graduated from Albion (Michigan) College in 1963, where he majored in history and English. He then went on to receive an M.A. from Western Michigan University, Kalamazoo, MI, in the area of emotionally impaired. Before coming to Pine Mountain, he had been teaching for 15 years in a self-contained classroom at Starr Commonwealth Schools in Albion, a private residential treatment center for emotionally impaired delinquent boys.

Carol Urquhart received her B.A. from Albion College in 1963 in biology, chemistry and music. She then earned an M.A. from Western Michigan University in the area of mentally impaired. She was the first teacher at Marshall Junior High School, Westland, MI, in the area of mentally impaired and then taught seven years at the Manor Foundation, a residential school in Jonesville, MI, for mentally impaired and disturbed boys. She had also experience in teaching nursery school, elementary music, group and private music, and adult education in music, art, and crafts.

Both Urquharts had been involved in extra-curricular activities as well, including various functions in theater, church, non-profit organizations and community service. In the Pine Mountain area, Carol was on the staff working with children at Berea College Christmas Dance School and at the Appalachian Folk Week at Hindman Settlement School.