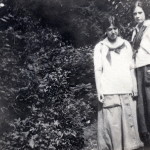 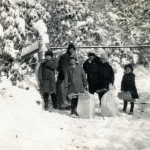 Lilliath Robbins (Bates) served as a housemother and primary teacher at Pine Mountain Settlement School in the School’s earliest years, 1917 to 1920. She lived at Big Log with the co-founder and co-director Katherine Pettit. They appeared to have become good friends, as the two kept in touch through their correspondence for several years, with Miss Pettit providing School updates and Lilliath often enclosing a donation. At least once, in 1925, Lilliath and her husband made a return visit to the School.

Two of Lilliath’s years at Pine Mountain were also spent teaching Sunday school for the community on Little Laurel, a tiny creek about three miles from Pine Mountain School. In 1919, she was asked by a father with a large family of children to teach at Little Laurel in the summer. As explained in the October 1919 issue (pages 3-4) of Notes of the Pine Mountain Settlement School, the former school had been closed for two years because “[o]ne of the families on the creek had moved away, and there weren’t enough children left for the county to engage a teacher.”

The Notes article describes in detail “how utterly shut away this district is,” where, “tucked away under two chestnut trees a little farther up the creek,” Lilliath lived in an old log house. The story concludes that “Two months’ schooling out of two years is only a beginning in acquiring an education, but it is a beginning that we must be thankful for. Many of the fourteen children have learned to read in the short two months, and all of them have gotten a sense of something outside the narrow confines of their own valley….”

Evelyn K. Wells described Lilliath’s service at Little Laurel in her history of the School:

“She touched a hollow that had had no district school taught for some years. Her housekeeping and hospitality made a lasting impression on the whole creek, and she made friends for Pine Mountain that have always kept their close, friendly relation.“

Miss Pettit, too, greatly appreciated Lilliath’s presence and expressed those sentiments in a May 14, 1920, letter to a friend:

“I wish you could see these May days at Pine Mountain, nothing could be more beautiful. Lilliath Robbins, who has never been here in May before says it is just like fairy land. She has gone away every year, the first of May. She has been my mainstay for a long time and now in August she is going to China for three years to teach in [Ginling] College. It is so hard to give her up but she is the kind that likes high adventure and I am so glad she is to have this chance.”

As of August 1920, Lilliath was living and working in China as a missionary. In 1923, she married Miner Searle Bates while teaching at Ginling (Jinling) College in Nanjing, China. He was a missionary of United Christian Missionary Society and professor of history at the University of Nanjing, China, from 1920-1950. Lilliath and her husband were caught up in the Nanjing Massacre in China in 1937.

(Many Pine Mountain Workers had a direct connection to the events in Nanjing through the Yale-in-China program which included friends who worked in the program as well as at PMSS, particularly Burton Rogers, later a longtime PMSS director, 1949-1973.)

“… I am so proud of the things those two people have done and that they want to stay on the job and refused to leave. I am so glad that they found each other, for they are truly great. I think Searle Bates is one of the most interesting people I know, and you know his father is one of the greatest men who have ever been here. I heard Miss [Evelyn] Wells say she never heard anybody give a better talk than his sermon. Have you seen all the things that Searle wrote his father? He sent them to me and if you would like I would be glad to send them on to you. It gives an account of the situation from another point of view. … ”

Lilliath’s latest letter in the PMSS Archives was written in 1941 and addressed to then-director, Glyn A. Morris. She asked Morris if he would send her a transcript of the Nativity Play and related photographs that she had lost “when my home was looted in China.” She wrote:

“In one of my courses(?) some of us are gathering material on Nativity Plays and I should like to use the simple play we adapted for use on Christmas Day at the House in the Woods. I’m wondering if you have the play in typewritten form and whether you have any descriptive literature and pictures referring to it. Do you still give the same play? It was a thrilling experience in those days, before the road was built, to see the mountain folk ride in from distant hollows to ‘take Christmas’ at Pine Mountain.

Do you have any snapshots of the play or of the guests at the school at Christmas or snow scene of the school? I’m enclosing five dollars…. I should be glad to have you use [the money] for Pine Mountain in any way you please.

In all these years the pressing needs of the Chinese, my nearby neighbors, have seemed to demand most of our gifts, but warm (?) heart is the memory of Pine Mountain.

Morris responded with appreciation for her letter and gift, and wrote that ““Perhaps you would be glad to know that our own boys and girls raised money for China last year and the year before, a part of which they obtained by eating a meal of corn bread and milk on the Sunday before Christmas.” He sent her a copy of the Nativity Play, “We delight in giving it here and find it one of the outstanding experiences of the year, if not the most outstanding.” However, the School no longer had the photographs she had requested.

Lilliath Robbins (Bates) was born in Digby, Nova Scotia, Canada, on September 12, 1893. She and Miner Searle Bates had two children: Morton Gaylord Bates (1926-1999), born in New Haven, Connecticut, and Robert Searle Bates, born in 1928 in Shanghai, China. Lilliath Robbins Bates died February 1982 at the age of 88 in Indianapolis, Indiana, and was buried in Hiram, Ohio, alongside her husband.