Frances Lavender came to Pine Mountain as part of the nursing staff in 1918 and stayed for one year. Like many staff at the School she served in several functions. Also, like many of the workers at Pine Mountain, her stay was short but formative for life. She never forgot the brief time spent at the School and remained in contact with Pine Mountain, particularly with Ethel de Long in the years before de Long’s death, and later with other staff.

She was apparently from Pennsylvania and may possibly have trained in education at the University of Texas. Little is known of her early education or how she came to Pine Mountain. Any additional information would be appreciated. Box 29: Director’s Files – Personnel contains a file that carries her correspondence spanning the years 1928, 1932-1935, 1944, and 1946. Individual items remain to be scanned.

The waning years of her life were spent in Pasadena, California, where she moved following her marriage to Rex Truman. She had children and, at her direction, her descendants passed along her photograph album to the School.

Following her departure from Pine Mountain Settlement School, as a staunch supporter of the School she made many contributions, generally small in scale, but consistent for the length of her life. Letters of correspondence with Ethel de Long and others are testimony to her ongoing fondness for the School and its formative influence on her life. Her commitment to the institution was unwavering and just prior to her death her photograph album was given to the School.

A small photograph album containing intimate images of Lavender at the School and the many community members with whom she worked. The album is exceptional in its level of photographic description and the annotations can be used to identify many members of the School staff and the community of service. 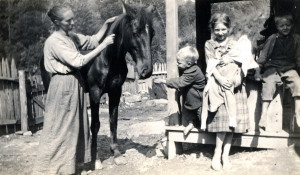 This page provides links to letters that Frances Lavender had collected and added to her album of photographs. The letters report on the activities of the School and the efforts to fund programs over the course of some thirty years. Many are form letters (“Dear Friend” letters) soliciting donations to the School and detailing the progress the School made during specific years.