Margaret Walker was one of a succession of nurses who worked in the Infirmary under Dr. Abby H. Little during the early years of Pine Mountain Settlement School, 1916-1918. In Evelyn Wells‘ unpublished narrative, History of Health Care at PMSS 1913-1928, she lists those nurses as “Miss Euphemia Larrabee of Boston, Miss Margaret Walker, a Canadian, Mrs. Helen Briscoe, here for a few weeks, and Miss Frances Lavender, who was here 1918-1919.” About Miss Walker, she writes:

At the close of Miss Walker‘s stay Uncle William Creech was in his last illness, and she took entire care of him, escorting him to [the Norton Infirmary in] Louisville and staying there till the end of his life. 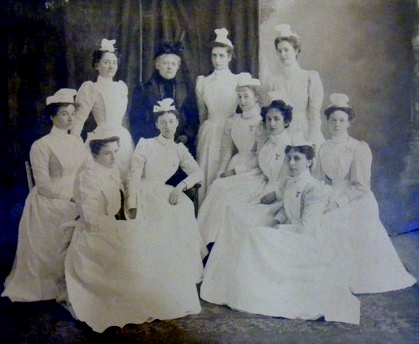 Group of Nurse Graduates from the Montreal General Hospital School of Nursing, including Margaret Walker. [pmss_archives_Nurses_1900_walker.jpg]

Miss Walker’s travels to Pine Mountain and the very different world that she encountered at the School must have greatly tested her ability to endure and adapt. However, the PMSS Staff Directory indicates that Miss Walker “gave large amounts until 1926,” suggesting that, after returning to her home in Canada, she remembered and appreciated her experiences as an Infirmary nurse at the Pine Mountain School.