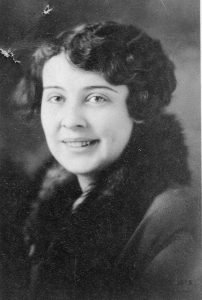 Nina McReynolds was intrigued by the stories that her schoolmate from Oxford (Ohio) College for Women, Rachel Davis, told of her three years at Pine Mountain Settlement School. Having worked in the PMSS office and as a housemother in the years 1924 to 1926, Rachel had many adventures to relate. Nina was inspired to acquire the School’s address from Olive Flower at Oxford and apply for a teacher or housemother position.

According to her application, dated February 1927, Nina graduated from the Home Economics Department at Oxford College for Women in 1923 where she was trained primarily in cooking and sewing. She spent the next three years teaching English, music, science, public speaking and dramatic work at Illinois high schools in Carmi and Lanark. Her references wrote highly of her, particularly Olive Flower, who described her as “patient, sweet, gentle, alive with understanding.”

Nina McReynolds was not only eager but well-qualified for the work described to her by subsequent letters from the Co-Director and Co-Founder Ethel de Long Zande. At first, Mrs. Zande suggested that Nina spend an unpaid summer tending to Practice House, and then possibly the School could “work out something” for her for the winter. Later, in March of 1927, Mrs. Zande indicated that the Medical Settlement at Big Laurel was in greater need of her talents, as someone was needed to do the housekeeping there for the two months that the temporary housekeeper would be absent. In addition, the position would also “carry a salary for the summer”:

“…[l]t may be that we shall need you for work at our Medical Settlement, an extension center four miles away. I want to tell you about it at any rate and to hear what you would think of it.

At the Medical Settlement there is the doctor’s house, the community house, and the barn. The summer family will consist probably of the doctor, the nurse, and possibly a volunteer social worker, and the housekeeper. Our regular housekeeper wants to be away from May 15 to July 15 and we need someone to take charge of things while she is gone. It might be that there would be more than four people in the family, for we sometimes have another worker there even during the summer doing playground or religious work. The housekeeper is assisted by a young girl ….

There too there is a garden, but one of the neighbor women looks after the cultivation of it and I think the garden wouldn’t trouble you because the general oversight could be taken by the trained nurse. Miss [Anna] Brockschlager, the housekeeper, is planning to be back in time to do most of the canning from the garden.

The Medical Settlement family lives on a budget, a certain amount of the twenty-five dollars a month each person pays for board going for light and heat, even in the summer months, for of course the winter budget wouldn’t be sufficient to meet all these expenses unless something were saved ahead. Miss Brockschlager could explain all this to you.

There is running cold water in the house and a sink in the kitchen, but kerosene for lights. There is a very pleasant room for the housekeeper. The other workers in the house are responsible for the ordinary cleaning of their own rooms and the nurse looks after the doctor’s office. That means that the housekeeping job consists of the care of the porch, livingroom, kitchen and cellar, outhouse and grounds. The other workers do the dishes at night, and we try to plan the schedule so that the housekeeper will have one whole day a week when she can get out, with meals planned ahead.

The neighborhood is an extremely interesting one and we always are anxious to have somebody who wants to know the people and have just as friendly and helpful contacts with them as possible.

Mrs. Zande also informed Nina that she would receive $40 a month in addition to “maintenance,” if that amount was acceptable. The amount was increased to $50 when Nina asked if the School would pay her travel expenses. In answer to Nina’s question about summer teaching, Mrs. Zande wrote:

It’s quite possible that you may be able to do some instruction. It is one of the things we like to carry on, but the women work in the fields and are very busy until the corn is “laid by,” so you would probably only be able to get hold of the younger children and those only between times. Corn is hoed out three times, you see, and there are slack spells in between when you might get some teaching done.

Nina was excited to accept the position and salary, writing, “All my life — since I’ve been old enough to have any ideas of my own — I have wanted to do some work of just this kind.” She consequently resigned from her job in Lawrenceville, Illinois, with the hope that PMSS would continue to employ her following the summer position. Back in her home in Robinson, Illinois, she began preparing for her new life.

However, on May 9, 1927, Nina regretfully wrote to Mrs. Zande that she could not come to Pine Mountain by the required date of June first “due to serious illness in my family.” Therefore, Mrs. Zande moved the arrival date to mid-June, when Nina was better able to leave home.

In response to Nina’s questions about travel directions and appropriate clothing, Mrs. Zande advised that Nina should notify Wilson Lewis at his post office in Nolansburg that she will need a ride over the mountain from Pineville to the School. She also suggested:

Any simple summer clothing, not silk, is appropriate, but it is hard to get good laundry work done, so we all wear the plainest sort of clothing. You will need good rain things. The workers at the Medical Settlement usually wear riding breeches when they go out into the country, but sometimes it is advisable to wear a divided skirt if you go to very remote homes where such modern things as riding breeches excite comment and disapproval.

Thus informed, Nina indeed traveled to Pine Mountain in 1927 and worked at the Medical Settlement at Big Laurel, according to her files in the PMSS Archives. There is no indication that she continued working at Pine Mountain into the winter.