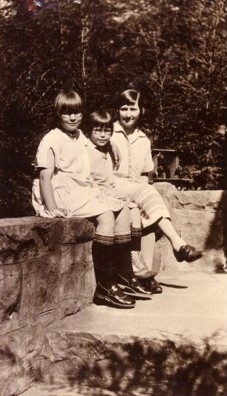 As a housemother at Big Log, Rachel H. Davis was performing a significant service that went beyond mere “babysitting,” according to the education principles of the Pine Mountain Settlement School founders. During the early years of the School, “housemothering” involved vocational training and hygiene education and therefore was seen as a teaching position as important as that of a classroom teacher. This fit into the School’s belief that education was to be part of all the activity at the School.

Miss Davis was a housemother and an assistant in the Office during the years 1924 and 1925. As mentioned in an unsigned letter (034d) of June 6, 1926, to Katherine Pettit, the School’s co-director, and an undated letter (013) from Pettit, Davis was asked to return for another year (1926) to oversee Katherine Pettit’s house while she was on a world tour.

At age 93, Miss Davis still treasured memories of the School where she spent a short time so long ago. In a letter, dated February 27, 1991, she wrote the following to Paul Hayes, then PMSS director:

Thank you very much for your beautiful picture of the Chapel and the beautiful background!

It is a lovely picture in itself besides bringing back many remembrances to those of us who were even a small part of it in its early days.

I remember how Miss Pettit loved the Chapel! She said it was really a part of Pine Mountain — that the men had cut down the trees for providing the wood for it.

I remember the Chapel before the seats were put in. And I remember one Sunday when the front of the Chapel was filled with white dogwood. With the sun pouring in, it was a lovely sight.

I remember seeing a car in front of Laurel House when we went over for Sunday dinner. It was the first and I believe the only car I ever saw at Pine Mountain. It looked like a big bird! It had been driven by a minister who had come for a Dedication Service — I believe it was for the Chapel. He had missed the Harlan-Laden train and felt it was necessary to be at the school, so had hired a car to drive over.

Again, thank you for your thoughtful and lovely gift!

Please excuse the errors in typing — I could do better before I was 93 years old. I can’t make the comma work.

Other than her estimated birth year of 1898, not much is known about Rachel H. Davis. It is possible that she is the same “Rachel H. Davis” who is listed in a 1910 U.S. Census taken in Robinson Township, Crawford County, Illinois. If so, her parents were Bruce and Anna H. Davis and she was born the fourth of six children.