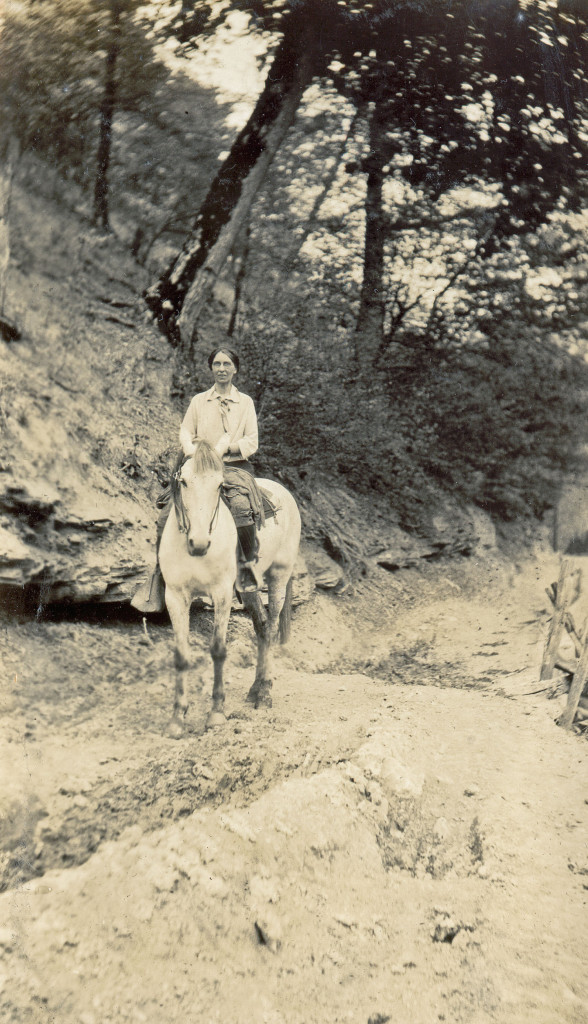 Anne Ruth Medcalf worked at the Line Fork Settlement as a Community Nurse from 1921 – 1924. She came from Chicago, Illinois, to the Appalachian region sometime in the early 1900s where she worked at other settlement sites and became interested in the health issues of the people of Appalachia. The Veterans Administration Master Index records that she served in the U.S. Military service in St. Louis, Missouri, as of 1919.

She was recruited by Katherine Pettit to work at Line Fork Settlement in 1921, in the second year of the development of Pine Mountain Settlement School’s medical extension.

Following her brief time as a worker at Line Fork she wrote an article for the American Child Health Magazine in December of 1924, titled, “In the Line Fork Country.” It is one of the more thoughtful articles written on health literacy in the Appalachian region, particularly as it was practiced at Line Fork. In the article she describes the personal qualities required of health workers in the Southern Appalachian mountains as “ingenuity, tact, patience….” She spoke from her experience at Line Fork and her earlier years in other settlement locations in the area she calls the “Southern Highlands.”

In her magazine article she tells of the early struggle to find a place as a nurse in a new and isolated community. In the beginning, she notes that the role of the nurse “to her neighbors was not clear.” Most of the families imagined that a “nurse” would come and stay with the family through the duration of the illness and would help with chores not related to the medical condition of the patient such as “milking the cow and doing the family washing.” As she related in the article, “…the real purpose and function of the public health nurse was absolutely unknown [to the Line Fork community]. Hence the nurse had to lay foundations for her work in an almost untouched and uncultivated field.”

In the following accounts of Medcalf’s health work — the link to her full article from the American Child Health Magazine, as well as her “report” to Pettit of the time spent at Line Fork — there are statements that show the broadly held belief that saving Appalachian families was akin to saving the “pure Anglo-Saxon stock” — the “pure American.” This sentiment now strikes us as non-inclusive, as isolationist and parochial, as the views the Line Fork community was said by the workers, to hold. It was.

As Medcalf speaks out on the money and attention given to immigrants in the urban settlements, she argues for the “pure Anglo-Saxon” in Appalachia to receive equal treatment. Her regional and rural perspective about the “pure race,” while today is an anathema, was repeated by many of her colleagues and, today, is one of the controversial repeating themes of the rural settlement movement in the Appalachians. It contrasts sharply with the urban settlement movement and settlement houses, where the mission focused almost entirely on “raising-up” immigrant populations of diverse nationalities and ethnicities — but, ironically, both urban and rural settlement houses often excluded non-white races, though early industrial training institutes such as Tuskegee Institute served as a model for Pettit’s work and for others in the settlement movement.

While Anne Ruth Medcalf’s observations were non-inclusive, they were heartfelt observations, influenced in part by John C. Campbell, the Russell Sage Foundation, and other early advocates of the Southern Highlander. She found sympathetic readers in her colleagues. She also found an audience in the country at large. Her narrative report to Katherine Pettit and her later magazine article give an excellent context for the development of the rural settlement movement and the struggle to re-mediate poverty in the early twentieth century. It was not until the Works Progress Administration’s efforts of the late 1930s and early 1940s and again in 1964 when the Johnson administration initiated the “War on Poverty,” that Appalachia would find intensive government attention to rural poverty and health in America and they would still struggle to “get it right.”

Medcalf’s narrative and her article in the American Child Health Magazine form a good synopsis of the development of the Line Fork Settlement that is both thoughtful and thorough in its assessment of the work and workers. In her narrative, she describes her daily work at the settlement at Line Fork and includes photographs of the people she worked with both as patients and as co-workers. Her thoughtful narrative gives immediacy to the worker experience and demonstrates the profound impact her work had on her life and her belief in the education of the young as the means to move health literacy forward.

She was quite prophetic in the last paragraph of her magazine article:

The hope of the future lies in the proper training of the young, but the carrying out of a health program by such isolated units as Line Fork Settlement, while bettering in a degree local conditions, does not entirely cope with the general situation. Adequate care cannot be taken of these situations until the county and state assume the responsibility of the education and leadership of the people in these Southern Highlands. When this is done the people will shoulder their own responsibilities as they always have in the past according to their knowledge.

Following her departure from Line Fork, Miss Medcalf went to Chapel Hill, N.C., for further study. She wrote to Miss Pettit in answer to questions that came about policies and procedures related to her work at Line Fork, particularly the salaries paid to various workers. It is clear that Miss Pettit relied on Miss Medcalf for good counsel, even after her departure from Line Fork. The letter exchange occurred in April of 1925 when Miss Helen Little had just taken charge of the Line Fork Settlement. The letter follows:

I would have answered your recent note regarding the amount of wages we paid Bert Smith and the Lewis children right away, but many things have been pressing hard. At the time I was going thru examinations. Then I got word of the serious illness of my mother. I have been in constant Telegraphic communication with my family and I rather think I shall have to go up to Baltimore to-night. I have been very troubled.

As to what we paid Bert Smith: — Yes, we did pay Bert Smith .20 cents an hour and, although I impressed her with the fact that it was more than was usually paid at Pine Mountain, I never said you did not say to do it. I do not feel that’s the way to work with people. That, however, is of little consequence. Bert is worth twenty cents, in comparison to the men who were always paid twenty-five. She worked like a whiz and accomplished twenty cents worth every hour she worked. In case she was ever delayed in her job by her baby we calculated accordingly. Both Miss Smith [Elizabeth G. Smith, teacher at Line Fork] and I felt that our arrangement with her was the only fair arrangement. she was worth more than the women who averaged .15 cents the hour; in other words she was paid for the quality of her efforts and the results.

The Lewis children, however, are all off; they were never paid more than ten cents an hour and then only when they did an especially good job. They are indifferent workers at best. The least ones got about five cents an hour, Miss Smith says. Charlie — the big one — when he worked on the barn diligently got from .08 to .10 cents an hour.

I hope this is what you want.

I am enclosing a report of the tonsil and adenoids clinic we had at Line Fork. I meant to put it in the Line Fork Book. With very best wishes to you.

Sincerely but in much haste,
Anne Ruth Medcalf

Arthur Howard Estabrook worked for the Carnegie Institution in Washington, DC, and gained notoriety through his work in eugenics when he became an expert witness from the Eugenics Records office of the Carnegie Institution in 1921. His notoriety came about in his argument before the Supreme Court for the forced sterilization of Carrie Buck, a woman declared as “feeble minded and thus unfit to have children. The case, Buck v. Bell, which decided against Buck and was considered one of the poorest decisions to ever have been rendered by the Justices, still stands.

Estabrook’s article for Mountain Life and Work (1928) “Is There a Mountain Problem?” cites the “resident human stock” of Leslie County, KY as the cause for the socially and economically backward nature of the county and he uses a genetic analysis as a poorly disguised argument for eugenics by enumerating all the social services available but not utilized by the population. He further suggests that depopulation of the county which would enable access to the natural “valuable mineral, bituminous coal,” owned by outside interests and the upcoming second-growth timber, and would add to the regional wealth. Estabrook’s “problems,” as he sees them, “should be worked out on a state basis for the whole southern United States.” It is a chilling analysis.