Charles F. Nesbitt arrived at Big Laurel Medical Settlement in the summer of 1923, to board there while he taught at the nearby Big Laurel school for the next 6 1/2 months. This was his second summer teaching for Pine Mountain Settlement School. 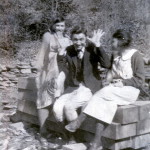 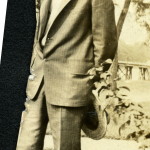 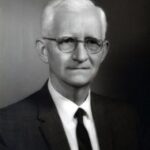 Soon after receiving an A.B. from Wofford College, Spartanburg, South Carolina, in 1922, he was attending the Candler School of Theology at Emory University in Atlanta, Georgia. In May of 1923, when his financial situation required that he put his own education on hold, he contacted Mrs. Ethel de Long Zande, the co-director of Pine Mountain Settlement School that oversaw Big Laurel, about the possibility of another teaching position. He was acquainted with Pine Mountain, having taught at the Cutshin school the summer before. Zande hired him to teach at Big Laurel from July until December 1923. He planned to return the next year.

In the meantime, in September of 1923, Ethel Zande was looking for a “general worker” to assist the current Big Laurel Medical Settlement staff in various ways and eventually hired Miss Aileene Lewis from Louisville, Kentucky.

Miss Lewis left her secretarial position at the Louisville Conference Epworth League and came to Pine Mountain in early October 1923 and, soon after, met Charles Nesbitt.

Charles returned in 1924 to teach for another term after which he and Aileene left Big Laurel Medical Settlement in February 1925. Their marriage occurred during this period of time. They were in Louisville, Kentucky, when they received a letter from Ethel Zande on February 9, 1925, expressing “great appreciation of the work you have done at Big Laurel in the last two years. Zande invited Nesbitt to return for a visit at Big Laurel, “for I know this will be a memorable two years in your life and that you will really prize the relationships you established.”

By the time of the 1930 U.S. Census, Charles and Aileene were living in Jackson, Mississippi, where Charles was teaching classes at Millsaps College. Mississippi was also where their son, Charles Burns Nesbitt, was born on May 7, 1932. (He was later known as The Rev. C. Burns Nesbitt. He died in 1999.) Charles went on to earn a B.Div., M.A. and Ph.D. from the University of Chicago.

In 1939, Charles joined the religion department at Wofford College, the year he completed his doctorate. At Wofford, he prepared a generation of students to become Methodist ministers. During his tenure, he was a chairman of the Department of Religion and a John M. Reeves Professor of Religion Emeritus. As a member of Phi Beta Kappa, he was an officer of the southern section of the Society of Biblical Literature at Duke University. He retired from his Wofford College position in 1966.