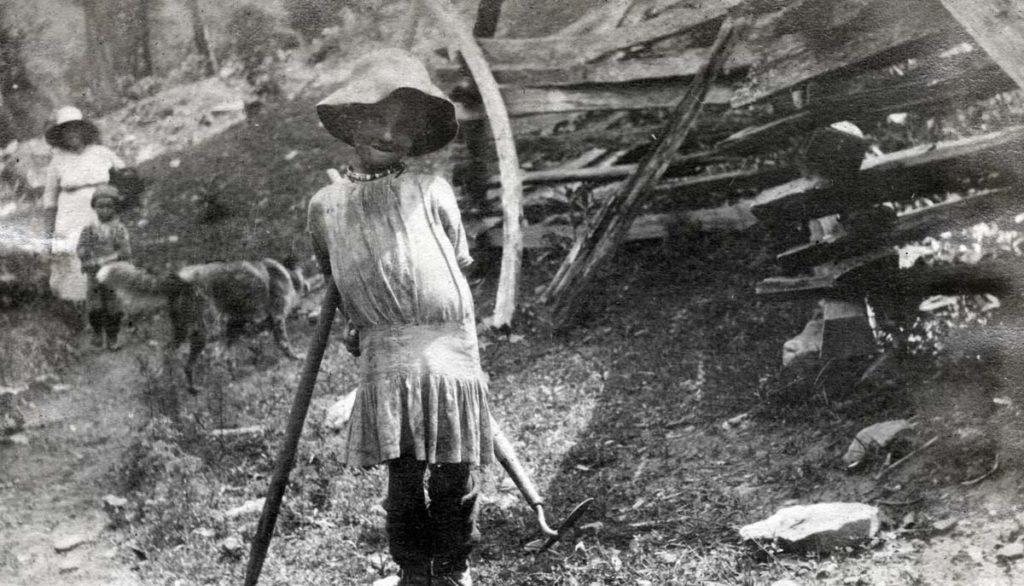 As a little girl, Oma Creech’s talents were already apparent. When Oma was twelve years old, one of her teachers, Marguerite Butler, wrote admiringly of her in a 1921 letter:

The children certainly have done well in school. I can[not] believe Oma Creech, Delia’s girl, will be in high school next year. She is brilliant really. She leads the class. She is…so capable in every way.

Oma was the granddaughter of Uncle William and Aunt Sally Creech, the donors of land to the Pine Mountain Settlement School. Born in 1909 in Jane, Kentucky, she was the second of eight children of Henry C. and Delia Creech.

All of the Creech’s children were students at Pine Mountain Settlement School (PMSS), including Oma. The following images and transcription are of letters she wrote as a young child. 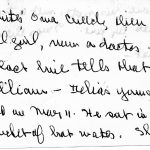 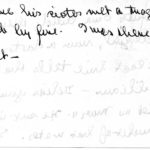 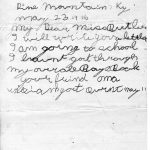 The writer’s Oma Creech, then a small girl, now a doctor. The last line tells about William – Delia’s youngest, died on May 11. He sat in a bucket of hot water. Shortly before his sister met a tragic death by fire. I was there for that.

Oma she learned to weave while a student at Pine Mountain. Evelyn Wells, in her history of PMSS, tells of Oma using her grandmother Aunt Sal’s old loom to copy a family heirloom blanket.

One year after Marguerite Butler’s letter, the 1923 issue of PMSS’s publication, Notes from the Pine Mountain Settlement School, described Oma’s interest in preserving her family legacy.

Up the creek, Oma, one of Uncle William’s grand-daughters, a girl of thirteen, has had her father take down the old parts of Aunt Sal’s colonial loom, which she has saved all these years, hoping that the young people would take up weaving some day, even though factory-made cloth was increasingly available to them. It was a great day when they set up the old gears and parts, reminiscing about the days when ‘maw took to weavin’….Oma is buying, with her weaving money, a victrola and records — the best instrument on the market, she insists and good music.

After receiving her high school diploma from Pine Mountain Settlement School, Oma went on to Berea (KY) College, graduating in 1930. She then furthered her studies at Louisville Medical School, graduating in 1934. She was mentored by Dr. Alfreda Withington, a PMSS doctor (1924–1931), according to a letter Dr. Withington wrote to Delia. Her medical education was funded by the Oma Creech Fund, established by Director Glyn Morris who also solicited donations. 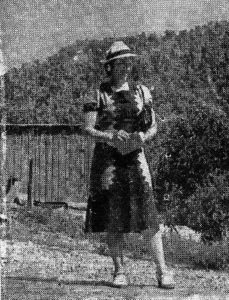 Oma continued to live with her parents, Henry and Delia, at the family home through 1940. By 1943 she was a practicing physician in Kentucky, as recorded in that year’s issue of Notes. The “1943 Pine Mountain Family Album” proudly described Oma’s accomplishments:

Dr. Oma Creech is…one of our alumni of whom we are most proud. She graduated from Berea, took her medical training at Louisville, and her internship at the New England Hospital for Women in Boston. She is now back in Kentucky, as doctor and health supervisor, helping to realize many of her hopes for her home state.

By 1944 Oma was serving overseas during World War II as a major in the United Nations Relief and Rehabilitation Administration (UNRRA), an international relief agency. She is listed as married and her name appears as “Oma Creech Fiske” on a 1946 passenger list for the “Aquitania,” sailing from Southampton, England, to New York, NY. This was possibly a record of Oma’s return from her work with the UNRRA. Oma’s wedding date and the full name of her spouse are unknown.

Oma Creech Fiske is listed as having had a license to practice medicine in Pittsburgh, PA. from 1961 to 1976.

The date of Oma Creech Fiske’s death is also unknown. A report of the 1986 annual PMSS Alumni meeting records that

A moment of silent prayer was held in memory of Dr. Oma Creech Fiske and many other members were remembered by their friends.

The Berea College Magazine has listed several times through the years that gifts were provided to the College in the memory of Dr. Oma Creech Fiske.