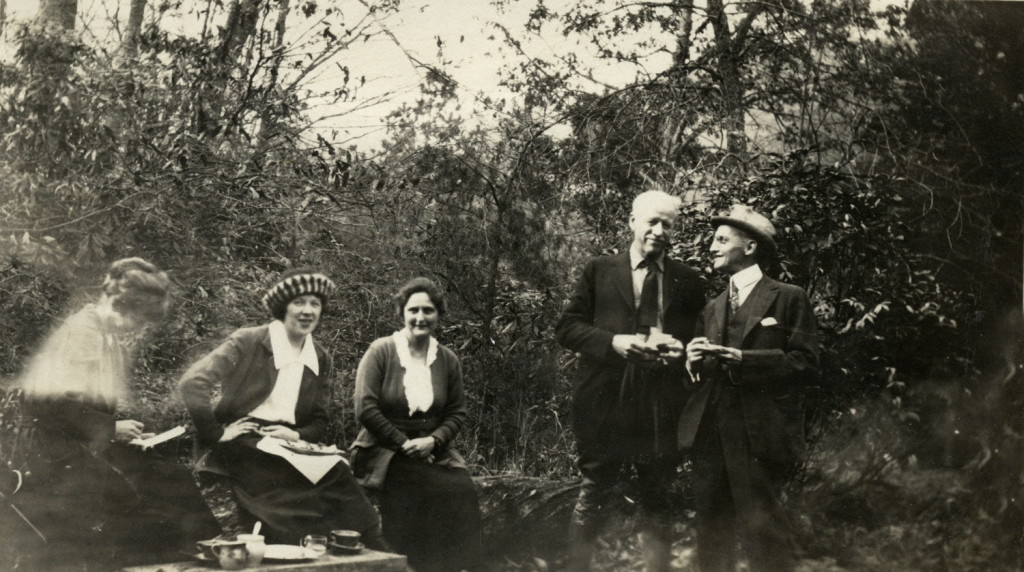 J. S. Crutchfield and other board members and staff enjoying a picnic at the Lean To, across from Boy’s House. [X_100_workers_2551_mod.jpg]

James S. Crutchfield and his daughter, Harriet Crutchfield, had a deep affection for Pine Mountain and for Kentucky. His dedication to the School was evident during his service as a member of the Board of Trustees of Pine Mountain Settlement School from approximately 1933 until 1947. He was Board President for three of those years. Harriet was a member of the PMSS Advisory Board and a teacher at Pine Mountain for two school years (1928-1930). For years afterward, she continued to keep up her correspondence and contributions to the School until ill health in the 1980s limited her activity. 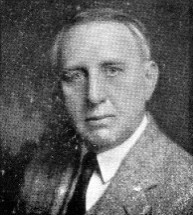 During the boarding school days at Pine Mountain, James Crutchfield set up a small trust fund, held in guardianship by the senior class, for students in need of a loan. In 1935 Virgil Smith was one of the beneficiaries of this fund. Virgil used the loan to aid him in his job search and paid it back a year later.

James S. Crutchfield was a well-known  agricultural trade specialist and founder of the American Fruit Growers Association, Inc., a leader in the development of an organized marketing of produce on a national and international scale.

With his cousin, Robert Woolfolk he created the Crutchfield-Woolfolk Company in 1903, and opened their first packinghouse in Cresent City, Florida. The two cousins worked to refine the processes preparing fruit for shipment. James also helped to reform the industry’s standard trading rules and practices and was asked on several occasions to testify before Congress on fair trade practices in shipping perishable fruit.

In 1919 the Crutchfield and Woolfolk firm was incorporated as the American Fruit Inc. whose Blue Goose brand became well known particularly for its grapefruit.  James S. was the primary creator of the Blue Goose brand. He was president of the company from 1919 until 1939. Centered in Pittsburgh, PA, the company established the Blue Goose trademark as the first large-scale effort to identify the perishable fruits and vegetables that it sold to the consumer and to work for favorable shipping rates for customers throughout the country.

The well known BLUE GOOSE fruits and vegetables
advertised and distributed by American Fruit
Growers Inc., almost invariably bring better prices
than the same qualities distributed under brands
that have not been advertised either to the trade or
to the consumer.

What the American Fruit Growers Association and the brand Blue Goose brought to the fruit growers of America. particularly Florida and California, was the concept of the “Private Exchange.” The new private exchange concept was an important sales outlet that offered a broader distribution for the fruits and vegetables. Blue Goose was one of the largest of these exchanges

An important sales outlet is offered by the
private sales exchanges or national distributors.
They maintain an organized sales force throughout the
country which may be used by Individual growers or
cooperative associations not in a position to main-
tain their own sales organization, and who wish to
secure the advantages of wide distribution ….

The private sales exchange, by handling the dis-
tribution of the crops for many shippers variously
located can keep its sales force busy the entire 12
months of the year. The exchange maintains salaried
representatives in the most important markets and
operates through bonded brokers at many other car-lot
markets.

James S. Crutchfield’s daughter Harriet Crutchfield helped to test the shipping methods and successes advocated by her father in her many “orders” of fruit for herself and her colleagues and students at Pine Mountain Settlement School. See her Journal and her letters to her father.

As a holder in American Fruit, Inc., Crutchfield also worked with Porcher, Woolfolk, Rule, and Michael in the development of Deerfield Groves in Cocoa Beach in 1917.