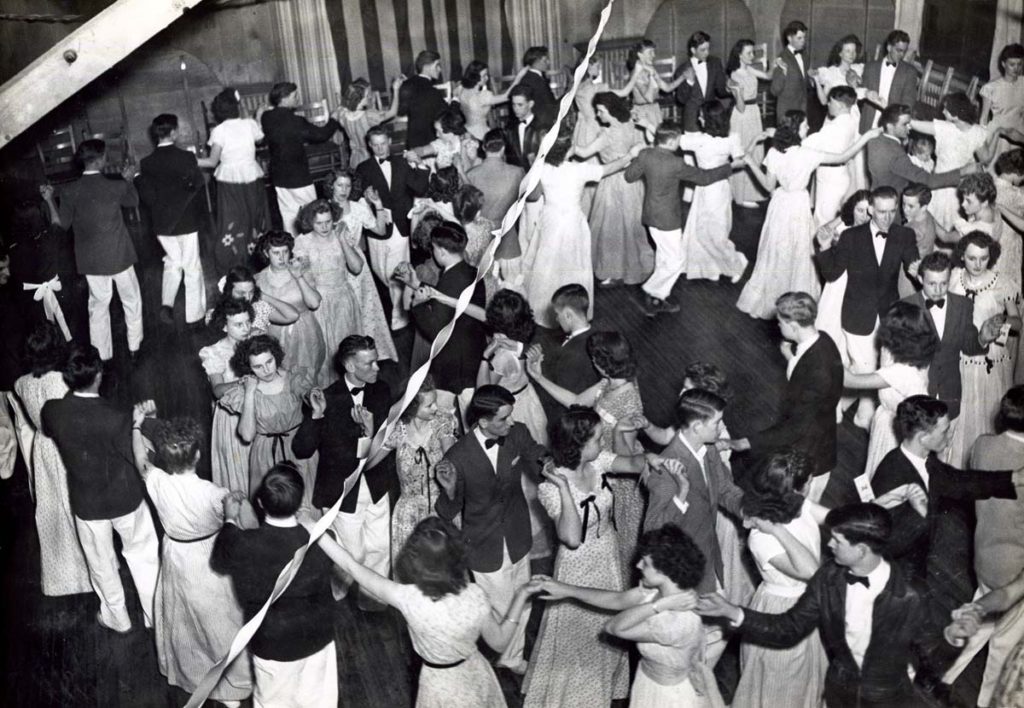 During the Pine Mountain boarding school years, dance was considered an important part of the School’s educational as well as recreational program. Consequently, dancing, primarily folk dancing, was often included in special occasions, such as Fair Day, May Day, during Christmas week, and at the end of Mountain Day. Throughout the 1940s the students looked forward to two very special annual dance events, the Thanksgiving Ball in November to observe the national holiday and the George Washington Ball on or close to February 22 to celebrate the birthday of the first U.S. president. (See images and description of the Thanksgiving Ball here.)

According to plans by the senior class, preparations began months in advance for each dance event. The new students met weekly with Miss Abbie Christensen, a PMSS teacher of English folk dancing at various times from 1927 until the boarding school ended in 1949 who became a recognized leader in the folk dance movement. Even during periods when Miss Christensen was not employed at PMSS, she would return for either event to teach dances such as the Danish folk dance “Totur” and the English country dances, “Jenny Pluck Pears” and “Heart’s Ease.”

Now that our very important event, the George Washington Ball, is over we have one person to thank for its success, and that person is Miss Christensen. She has spent many long, trying hours teaching us the beautiful dances we did at the Ball. We all admire the spirit she has shown. She was gay and cheerful at all times. Even when we were so dumb that we didn’t know one step from another, she didn’t get discouraged, but she stayed with us until we knew the dances. I’m sure every student on campus appreciates the lessons she gave us. …. -Lois Collins, Co-op (page 1).

Another important contribution to the success of the dances was the piano accompaniment to the practice sessions by the School’s principal, Arthur W. Dodd. In the same Pine Cone February 1949 issue, Sue Ellen Creech wrote “A Bow To Mr. Dodd”:

… Not only did [Mr. Dodd] play for us at the Ball, but also during the months preceding the ball. Again and again for at least three nights a week he sat at the piano and played over and over for us the dances that we had to learn. Sometimes he would have to repeat patiently time and time again just one phrase until we caught on. Mr. Dodd must have had other things to do, but out of consideration for us and our pleasure, he good-naturedly gave us so much of his time. I know that Mr. Dodd also likes to dance, but not once during that evening except for the Grand March did he leave his piano to go out on the dance floor. That is all the more reason why we should appreciate his generosity. … -Sue Ellen Creech, Co-op (Page 5)

Meanwhile, the girls in Home Economics classes were planning and sewing their floor-length evening dresses, which were made of inexpensive fabric and often tied at the waist with a ribbon.

Finishing touches to the gala affairs included decorating the dining room of Laurel House with crepe paper streamers and covering several tables with lacy tablecloths. The rest of the wood crafted dining tables were stored against the dining room walls. Their round tops were folded up, creating an expansive ballroom floor. In November 1941 the George Washington Ball celebrated a grand opening of the completed Laurel House II. The structure had been rebuilt after a fire devastated Laurel House I in January 1940.

The dances weren’t the only features of the day. In various years, additional entertainment was planned around the big event, such as plays, barbecues, a puppet show by the freshmen, and the seniors’ ice cream “bazaar.” There were also special dinners, Chapel programs, ball games, singing groups and table games set up in the living room during intermissions.

When the long-anticipated evening arrived, students as well as workers and their children filled the dining room. Music could be heard from an “orchestra” that was actually a record player, using records from the School’s large collection. The lights were dimmed and couples in their finery formed sets to perform stately English, Danish, and American folk dances. The atmosphere must have indeed been enchanting.

At the end of an article about dancing in the February 1949 Pine Cone (page 6), Jean Carol Warren mentioned a sentimental Victorian era ballad. The title, “After the Ball is Over” is a fitting reference. The boarding school years ended in 1949 and, regrettably, so did those glorious George Washington and Thanksgiving Balls. 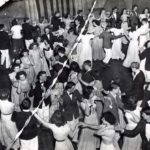 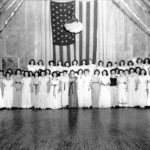 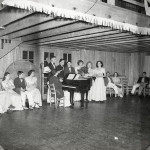 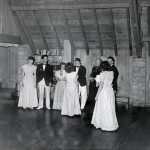 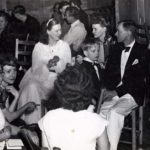 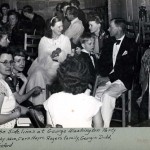 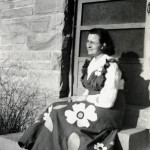