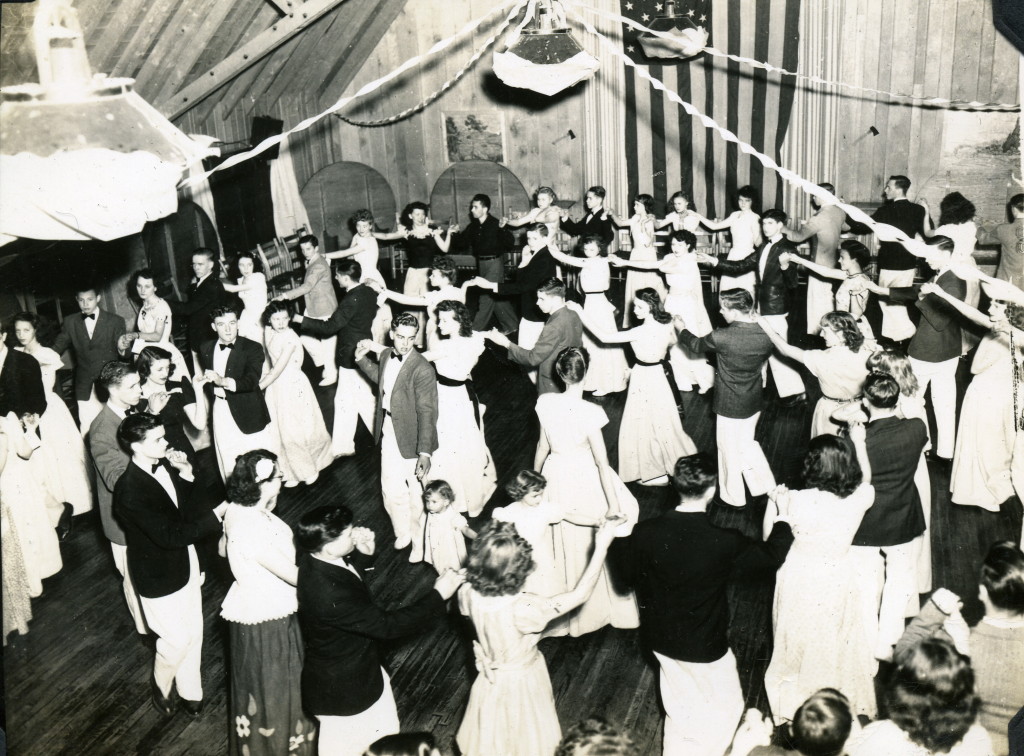 Dancing was an important part of the students’ education and recreation during the boarding school days at Pine Mountain Settlement School. Annual events such as Fair Day, May Day, Christmas celebrations, and Mountain Day included dancing, primarily folk dancing. In the 1940s two formal dance events were held each year: Thanksgiving Ball in November in observation of the national holiday and the George Washington Ball on or close to February 22 to celebrate the birthday of the first U.S. president. (See images and description of the George Washington Ball here.)

Preparations for each event began months in advance. The new students met weekly with Miss Abbie Christensen, a PMSS teacher of English folk dancing at various times since 1927 who became a recognized leader in the folk dance movement. Even during periods when Miss Christensen was not employed at PMSS, she continued to return and teach dances such as the Danish folk dance “Totur” and the English country dances, “Jenny Pluck Pears” and “Heart’s Ease.”

The School’s principal, Arthur W. Dodd, patiently accompanied the practice sessions on the piano several nights a week for months preceding the Ball. Appreciation for Dodd’s and Christensen’s contributions to the success of the dances was expressed in the student publication Pine Cone in February 1949 (pages 1 and 5).

Also, during this preparatory time, the girls in Home Economics classes were busy at the sewing machines, creating their floor-length evening dresses. From 1945 through 1948, “peasant costumes” were worn to the Thanksgiving dance instead of formal gowns. The event was then referred to as the “Thanksgiving Peasant Party.”

The sewing projects were described in a poem titled “How Beautiful Are the Feet of Youth Upon the Mountain” in 1944 Conifer:

…Each girl doing her part thoroughly and willingly,
Acquainting ourselves with the use of patterns,
Making an evening dress for the Thanksgiving Ball —
For some of us our first one.
Basting and checking, sewing and rechecking,
Hours of delicate needle work before the dress was completed,
A dress we were proud to own, and proud to wear. …
(“How Beautiful Are the Feet of Youth Upon the Mountain,” pages 16-17.)

Notices for the Ball displayed in the Pine Cone. And, for most years, dance cards were printed, likely by students in the print shop. The dance cards were also known as “dance programs” or “prom cards.”

Crepe paper streamers were draped across the ceiling of the Laurel House dining room where the Ball was to be held. The round tops of the dining tables were folded up, allowing the tables to be stored against the walls to create a spacious ballroom floor.

Since 1944 was a Leap Year, the girls asked the boys to the Thanksgiving Ball, a reversal of the usual custom.

Throughout the long-anticipated day of the Thanksgiving Ball, other activities were often planned around the main dance event. In 1940, the Thanksgiving Ball was preceded by a performance of H.M.S. Pinafore, a light comic opera by Gilbert and Sullivan directed by Glyn Morris.

In 1941 the United States entered World War II and a new pole for the U.S. flag was installed on campus. It was also the year that the School held a traditional Thanksgiving Chapel service and a soccer game between students living in Far House and Boys’ House prior to the Thanksgiving Ball.

Attractions in other years included barbecues, a puppet show by the freshmen, and the seniors’ ice cream “bazaar,” gala dinners, singing groups, and table games set up in the living room during intermissions.

EVENTS Thanksgiving Ball: At the Dance

In November 1940, the first Thanksgiving Ball was held in the newly built but unfinished Laurel House II. The new structure replaced Laurel House I that was destroyed by fire in January 1940. A year later Theda Howard recorded the following quotes in the January 1941 Conifer:

“The Thanksgiving Ball and the dinner seemed about twice as good just because we were in the Laurel House we have so long looked forward to.” … “I know all the credit for such corking times can’t be given just to this one new building. But, I guess it seems to be.” – “Why Laurel House Nodded a Gable” by Theda Howard.

…the boys called at the girls’ dormitories to escort them to the Ball. The boys in dark coats and white pants and the girls in soft pastels and prints made a becoming picture under the amber light. (Pine Cone 1941 November, page 4.)

The students as well as workers and their children, dressed in their finery, streamed into the dance hall. Music filled the air and it didn’t matter that the music came not from an actual orchestra but from one of the School’s large collection of phonograph records. The atmosphere was magical.

An article and a poem in the 1944 Conifer captured the elegance of that year’s Thanksgiving Ball:

Under a canopy of yellow and white, the girls at their loveliest and the boys at their stateliest danced to the strains of a Pine Mountain orchestra, brought into being for the Thanksgiving Ball. (“Review of the Year,” page 5)

… Dim lights, beautiful decorations,
Girls in their gay dresses,
Boys in their white pants,
Gathering at Laurel House for the event of the year.
The orchestra striking up familiar tunes,
Couples forming sets for Nonesuch, Portland Fancy, and Jenny Pluck Pears,
Gliding gracefully over the floor, enjoying the vigorous swing
Of old English and American folk dances.
(“How Beautiful Are the Feet of Youth Upon the Mountain,” page 25.)

When the boarding school ended in 1949 so did the annual Balls. Only memories remained of those most lovely and romantic of the Pine Mountain Settlement School special events. 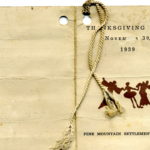 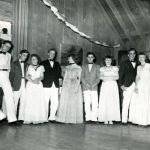 Thanksgiving Ball. Group of girls in gowns and boys in a row in decorated room. [020_students_07_005.jpg] 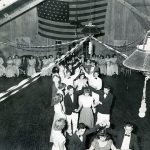 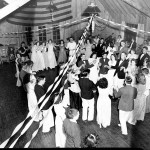 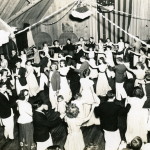