Stuyvesant Barry, called “Peter,” was born February 26, 1909, in West Orange, N.J. He applied to work at Pine Mountain Settlement School as an instructor in English Literature and Sociology in July of 1944. His application was successful and he agreed to join the staff of the School.

From his application for the position we learn that he was educated at St. Paul’s School in Concord, New Hampshire (1922-1927), a preparatory high school. He followed that with study at Harvard University from 1927 to 193, where he received a Bachelor’s degree. He continued at Harvard School of Law from 1931-1934 and following graduation he practiced law in Pennsylvania and for a time was associated with the law offices of Satterlee & Caulfield in New York City (1936-1938). He left the New York City practice just as WWII was beginning and by 1939 he was pursuing another profession that was to become his lifelong focus — teaching. In 1940 he returned to school at the University of Pennsylvania and until 1943 he studied Sociology and received a Master’s degree in the discipline.

Peter was also an extensive traveler throughout his life and his accounts of travel in his vita, confirms that. According to his vita, he traveled to France in 1920, followed by walks through Devonshire, Brittany, and Norway, and climbing in Switzerland in 1929. He also traveled throughout the U.S. and Canada in the early 1930s. In 1932 he sailed to Europe on a 52-foot ketch and there visited Southern France, Tangier and Gibraltar. Moving about seems to have been part of Peter’s passion for new ideas and experience. His search for new horizons punctuated his life and his interest in travel continued with his adventurous wife, Alice Trumbull (Scoville) Barry whom he married in 1935.

He began his long and rich teaching career track with the Episcopal Academy at Overbrook, PA, where he taught from 1939 until 1944. Work with the Episcopal Acadamy came in conflict with a growing interest in Quakerism. Peter came from a long family history that had Quaker roots, though he was born into an Episcopalian family. Alice came from a family that was largely Presbyterian. Following their marriage, both Peter and his wife Alice became followers of the Quaker faith, inspired by Peter’s work rehabilitating housing in Philadelphia’s slums where he came into contact with Quaker workers. His interest in the communion of Quakers and their commitment to service seems to have been integral to his shift in careers. Further, many of the Philadelphia rehabilitation projects had their origins in the urban Settlement Movement of the late nineteenth-century. Social service soon became a career focus for Peter and for Alice.

As a Quaker, Peter also had a strong conscientious objection to the growing war in Europe and was exempted from direct military engagement but contributed service through a series of Quaker Work Camps. His work experiences during the war years in a variety of Quaker Work Camps as a conscientious objector was life-shaping and important to many of his life-choices following the world conflict.

It was his appointment as staff and director of several American Friends Service Committee Work Camps that brought him to Pine Mountain Settlement School in 1944. Prior to landing at Pine Mountain, he worked at Penn Craft in Western Pennsylvania for a summer and in 1943 he worked briefly as Assistant Director at Vinalhaven camp-school in the Fox Islands off Maine’s midcoast. His son, Frank Barry, notes that following his summer experience at Pine Mountain, his father was so impressed by the mission of Pine Mountain that he applied to work at the School.

In the fall of 1944 he came to Pine Mountain to serve as Director of the AFS Work Camp for the summer. He and his wife Alice were charmed by the mountain settlement school and its lush natural environment and unique community. It was at that time that he pursued a residential position at the School as a teacher under the direction of H.R.S. Benjamin, the School’s Executive Director.

In his application he writes about how his experiences working in rural environments, particularly that of Pine Mountain, shaped his decision to make application to Pine Mountain for a more permanent position:

“I became interested when I read an article about Pine Mountain and its community projects, which sounded so desirable after my experience in teaching a conventional academic & cooperative sports program. I became more interested after I had happened to come here [Pine Mountain] as Work Camp Director at a time when I was decided to leave Episcopal Academy for a less conventional type of school. I want to participate in the valuable work I feel the school is doing.”

The Barry family returned to Pine Mountain for the school year of 1944 and stayed until the end of summer 1947 when they left for Rutland, Vermont, where Peter worked at Rutland Jr. College. That position was followed by a move to Buckingham Friends School at Lahaska, Pennsylvania, in 1950 where Peter later served as Principal. He was at Buckingham until his retirement in 1989 when he was 80.

Peter’s personal interests are a varied as his career. He described those interests in his application for employment at Pine Mountain. Choral Singing, Birds and Drawing and Painting was the short list he outlined. He described his choral experience as various choirs and chorus in his school years and one year in oratorio [?] in N.Y. and as President of the Interracial Chorus at Ardmore in 1944. He also noted that he had incorporated “informal singing” in his activities with the various AFS Work Camps. Regarding birds, he described a five years’ interest and sporadic study of birds (mostly during migration). He and his wife also conducted two bird classes. His painting and drawing experience included “one summer’s study” under George Luks, a member of the so-called Ashcan School in New York and “some watercolor work since then.” The Ashcan School, included Luks, Robert Henri, John Sloan, Everett Shin, Arthur Davies, Ernest Lawson, Maurice Prendergast, William Glackens and others. It was a loosely organized gathering of realist artists who wanted to depict the visceral nature of life in a visual and documentary form. The Ashcan School eschewed the more confrontational socialism of the Populist reformers active at the time. This influential mix seemed to feed into many areas of his later life.

Peter’s association with many of the artists of the Ashcan School, while brief, was very telling of the time and also in his later life choices. Luks and the artists associated with the movement were very sympathetic to the earlier Settlement Movement and shared many of the same values and mission to raise the country’s awareness of the less fortunate in society. Work with immigrants, the poor, the rights of workers, and the uplift of worker’s families were also part of the mission of the AFS in the first decades of the twentieth century. The moniker “Ashcan School” was assigned the group in 1916, just three years following the founding of Pine Mountain Settlement School and only three years following the 1913 Armory Show which Robert Henri and John Sloan helped to organize. The Armory Show helped to set the course for Modern Art in America for years to come.

One of Peter’s references, the philosopher Douglas Van Steere of Haverford College, speaks to Peter’s pursuit of a life of value in the following statement:

Peter Barry, as we know him is a rare personality. His willingness to leave a well-paid past with a distinguished private school is only because of a deep and growing social concern. He has the great asset of a beautiful and cultured wife of the highest integrity and character and their lovely children. This couple is distinctly ‘in growth’ and will be a real asset at Pine Mountain. 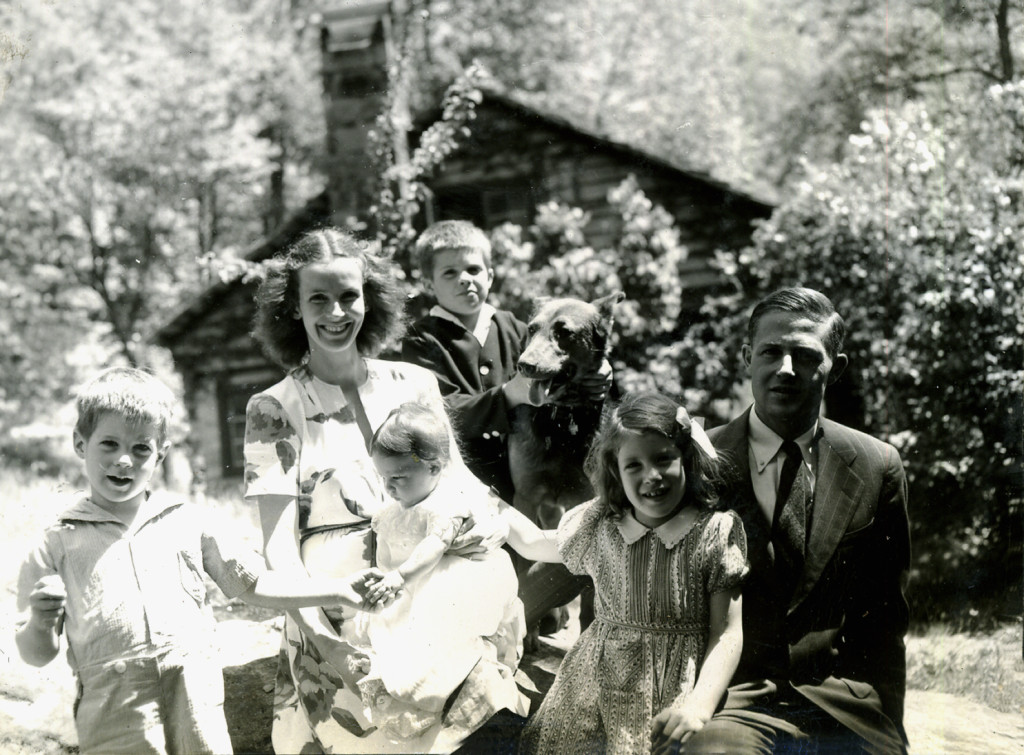 From the date of the Barry family departure from Pine Mountain in 1947 forward, there was a steady flow of correspondence with members of the Pine Mountain staff as well as with Burton Rogers, a later Director and a Quaker. The Barry letters are wonderful records of the growth of their children, all five of them, the indomitable spirit of Alice Trumbull (Scoville) Barry and the lasting influence that Pine Mountain had on all the family.

For example, in 1948 Alice sought to return to Pine Mountain for a visit and to bring along her father so she could share with him the School she had found so meaningful. She arranged for a visit back to Pine Mountain and for a visit with the Creech family near the School. Her letters regarding her departure from Peter, the children and Pluto, the dog, and the adventure of travel back to the mountains is delightfully detailed in her biographical record. The return to the School was an adventure, filled with the memory of place. It is only one of many adventures that Alice managed in her long life. 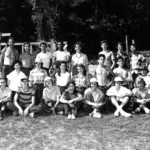 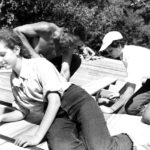 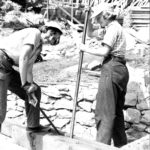 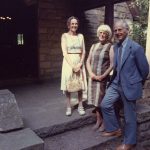 In 1950 Peter helped to arrange for another Summer Work Camp at Pine Mountain for students associated with the American Friends Service but was unable to return to direct the camp as he continued his responsibilities at the Buckingham Friends School.

In 1957, Alice wrote to Pine Mountain that the family was living in New Hope, Pennsylvania. In that same year the Barry’s oldest son, Frank, visited Pine Mountain as a worker with the Earlham College work campers and Kathy, the oldest daughter was enrolled in Radcliffe.

A running correspondence with Pine Mountain continued for nearly two decades and includes a chronicle of the growth of the children, vacations, work and other family highlights. The Barry family records are largely comprised of the correspondence of Alice with the friends she made at the School. While the files end in 1961, there was ongoing personal correspondence with the Burton Rogers family that may be found in the Roger’s Director’s files. The Barry record is a record of deep affection for the School, a chronicle of the family as they evolved and a testament to their belief in Pine Mountain’s educational mission, but it is also a record of the war years and how families confronted the war. The Barry’s continued their financial contributions to the School for nearly twenty-five years and in the 1990s the family returned to Pine Mountain for a visit.