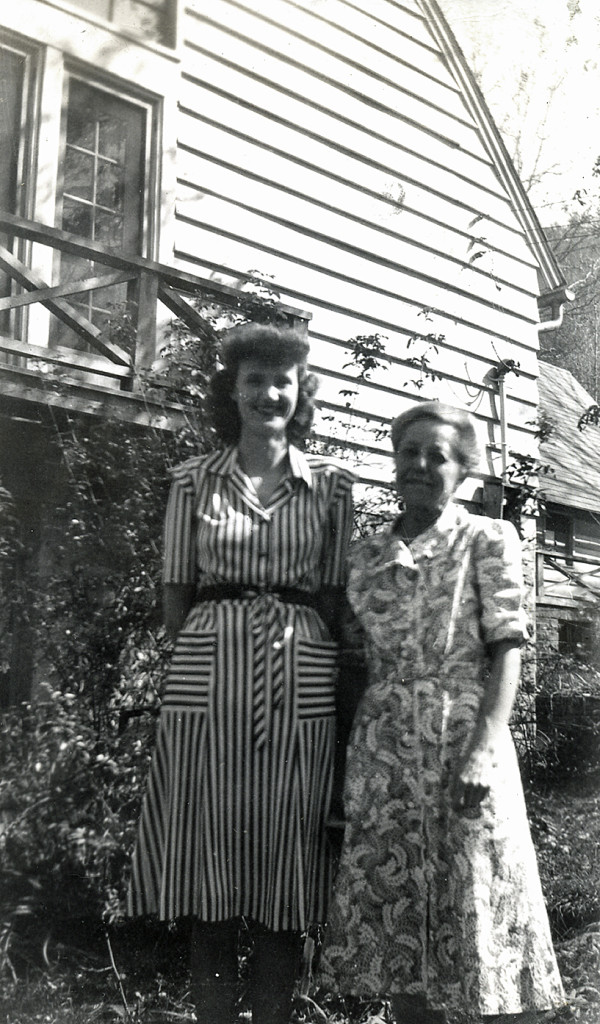 Bertha Cold, Edith’s sister, a student at Pratt Institute in Brooklyn, New York, was also at the School from June 1933 through June 1935, as a dietitian.

The two sisters continued to have a lifelong correspondence and affection for the School. 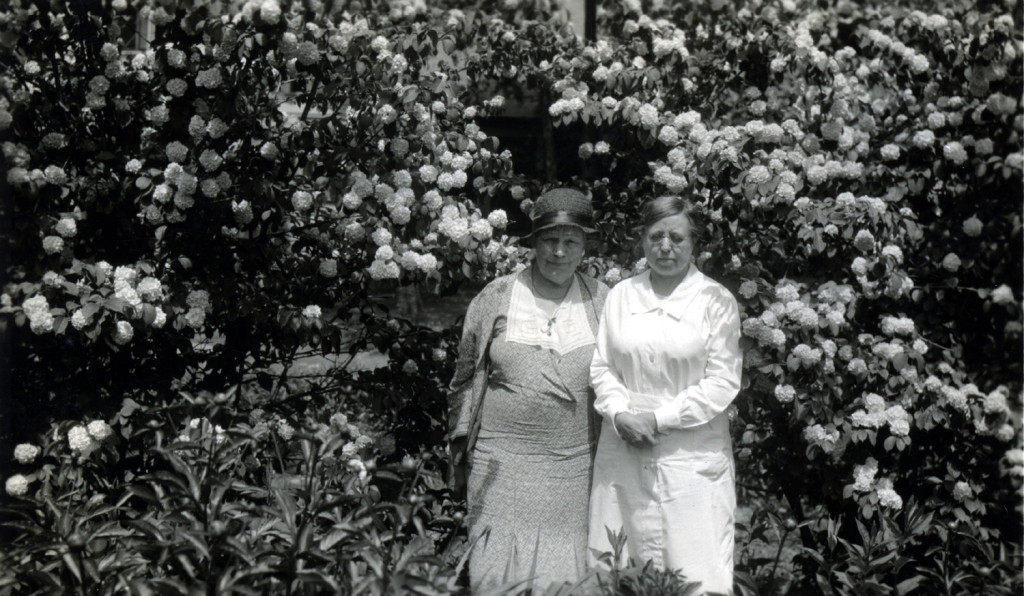 Some of their earlier histories are recorded in notes accompanying the Ben Lomond Quaker Center website:

Edith Cold, her sister Bertha Cold, and her sister Lucile Cold Manley came from a Quaker family. Lucile and her husband Clyde, lived in Ben Lomond, CA, and the parcel of land they purchased in 1920 eventually became the “Quaker Center” in [Ben Lomond] Santa Cruz County, California. Edith Cold came to live at the center after leaving Pine Mountain and lived at the Center until her brief care in an assisted living center and her death in 1976 [1980 ?]. Her home at the Ben Lomond Quaker Center became the central retreat building. In her late 90’s Edith Cold was still raising soy beans in her garden and enjoying the many drop-in guests to her home on the mountain. She lived simply and with great thoughtfulness, much as she did most of her life.

The mist with gentle fingers
Strokes my face.
Trying with elemental coolness
Its fatigue to efface.

The inclusion of Dr. Ida Stapleton in the picture with Edit’ sister Bertha is important to the history that connects the Colds with the Stapletons. Theirs is a history that was not as peaceful as the years they al spent at Pine Mountain Settlement and at Line Fork Settlement. Edith Cold and Dr. Ida Stapleton and her husband Rev. Robert Stapleton all experienced one of the cruelest episodes to have ever occurred in Turkey  — the Armenian Genocide.

In 1911-1915 Edith Cold, a Brethren (Mennonite Church) was in Hadjin and Adana, Turkey, serving with the Congregationalist Church through ABCFM (American Board of Commissioners of Foreign Missionaries). As a Brethren, she was good friends with the missionaries from the United Orphanage and Mission who represented Mennonites, the Missionary Church, and Mennonite Brethren in Christ.

The towns near Adana had seen the extermination of some 30,000 Armenians by the Turks in 1909. The result was an overwhelming number of orphaned children. The foreign missions were charged with the care and education of these children. While stationed at Hadjin in 1915 Edith Cold wrote a report, “The Situation,” that described the conditions and “situation” she found in that year at her outpost in Hadjin. Her report included descriptions of the massacre of some 30,000 Armenians that had occurred in 1909 as part of the Young Turk Revolution. The town of Adana was overrun in 1909 but the town of Hadjin was able to withstand the Turkish assault until later, when in 1915 more than 1.5 million Armenians were killed in a genocidal sweep of the largely Christian Armenian population by the Ottomans and the Young Turk Revolutionaries. This later genocidal sweep included the town of Hadjin. Edith Cold, as part of the mission work in the Hadjin area with children made orphans by the earlier genocide, was caught up in the atrocities and her life was threatened in many instances.

The events of Hadjin stayed with her all her life and those who knew her were infrequently afforded a glimpse into those formative years. Edith Cold departed Turkey in 1915 and today Hadjin is largely in ruin. Very little of the original town remains and the accounts of the years in which Edith Cold worked in Turkey are fragmented and difficult to reconstruct. Some of the events in which Edith Cold played a central role were recorded in the New York Times and only begin to tell of her harrowing adventures in war-torn Turkey. The Times accounts are cited in the bibliography that follows this biography. Further, first-hand accounts written by Cold as reports on the Central Turkey Mission may be found in the papers of American Board of Commissioners for Foreign Missions, a list of which may be found at Bilkent University in Turkey. See: http://www.bilkent.edu.tr/~history/index_files/ABCFM/670.htm (accessed 2013-12-04) and the partial listing, below.

Also, see the comprehensive paper written by Rosemary Russell, “Hadjin: New Perspectives on the Siege and Massacre,” for the Journal of Armenian Studies, pp. 95 – 118. http://rosemaryrussell.com/wp-content/uploads/2014/06/04-Russell-Hadjin.pdf

Australian author Gretchen Rasch consulted with the Pine Mountain Settlement School archive on a new book published in 2015 that explores the Armenian-Ottoman Turk conflict and helps to unravel the complex conflicts in the border regions of Turkey. Gretchen explores the lives of her grandparents who also experienced the Armenian-Ottoman Turk conflict and were caught up in the horrific massacres of Armenians. The accounts of the Stapletons and of Edith Cold make difficult reading, but serve to remind us all of the perils of tribalism and ethnic exclusion and “cleansing”.  The role of women like Dr. Ida Stapleton and her husband Rev. Robert Stapleton and Edith Cold and others played a significant role in saving the lives of countless children.

While Edith Cold was also a witness to the deportation of Armenians from Erzerum and the subsequent battle for that city between Turkish and Russian forces during World War I, she was located some distance from the Stapletons, but all three individuals were witness to the horrors of the Armenian massacres. Like Cold, the Stapletons were well seasoned to address the severe medical, social and religious needs of the Line Fork area during 1926-37. Life at Pine Mountain in many ways must have helped to heal the mental wounds they surely carried away from the Armenian-Ottoman Turk conflict.

Edith Cold’s experiences in Turkey, and the events at Adana, Hadjin, and other Armenian towns had a profound influence on the remainder of her life which she devoted to peace and to a very simple lifestyle and, importantly, the education of children. Following her Armenian mission work, Edith Cold taught in several schools before she and her sister were employed by Pine Mountain Settlement School in the 1930s and 1940s.

While Dr. Ida and Rev. Robert Stapleton also worked in Turkey near the same time as Edith Cold and later came to Pine Mountain Settlement to head the Line Fork medical outpost, it is not clear what the extent of the Stapleton-Cold relationship was prior to Pine Mountain. They had connections through the Women’s Board of Missions of the Interior as did a small group of workers at Pine Mountain, particularly those that saw international missionary work in China.  The full relationship of the three remains to be explored.

Edith Cold, was a soft-spoken woman who thought deeply about life and the role we play in the lives of others. She often found solace in poetry and inspired many students to hone their language and reflect life in its most intimateand introspective moments . Her poem “Mist” and here, another, “Altar Flowers” are simple but strong reminders of the power of language, of light, and love to illuminate

. Pendant from the Chapel wall
Where the altar stands,
Sprigs of wayward ivy
Hang in dusky bands

When to that shadowed corner
Illumination comes,
The leaves turn into blossoms,
Radiant as suns.

See her touching article written for Mountain Life and Work in the Spring of 1947, “The King’s English,” that captures her sensitivity to language and the more subtle nuances of life in the work of her students.

See also Stapleton Reports and Letters at Pine Mountain Settlement School which form the foundation of Gretchen Rasch’s research for the Stapletons’ Kentucky years and provide graphic descriptions of life in the small community of Line Fork in Letcher County, Kentucky. [Rasch, Gretchen. The Storm of Life: A Missionary Marriage from Armenia to Appalachia, Gomidas Institute, 2016. [ : 9781909382237]

Author Gretchen Rasch’s interests are a nice fit with PMSS. With a background in threatened species protection, she worked with the US Forest Service, NZ Forest Service and the Department of Conservation. Her work in aquaculture permitting at the Ministry of Fisheries, where she “trained staff in report writing and the use of plain English,” certainly prepared her for this excellent book on her great-grandparents. A great read!