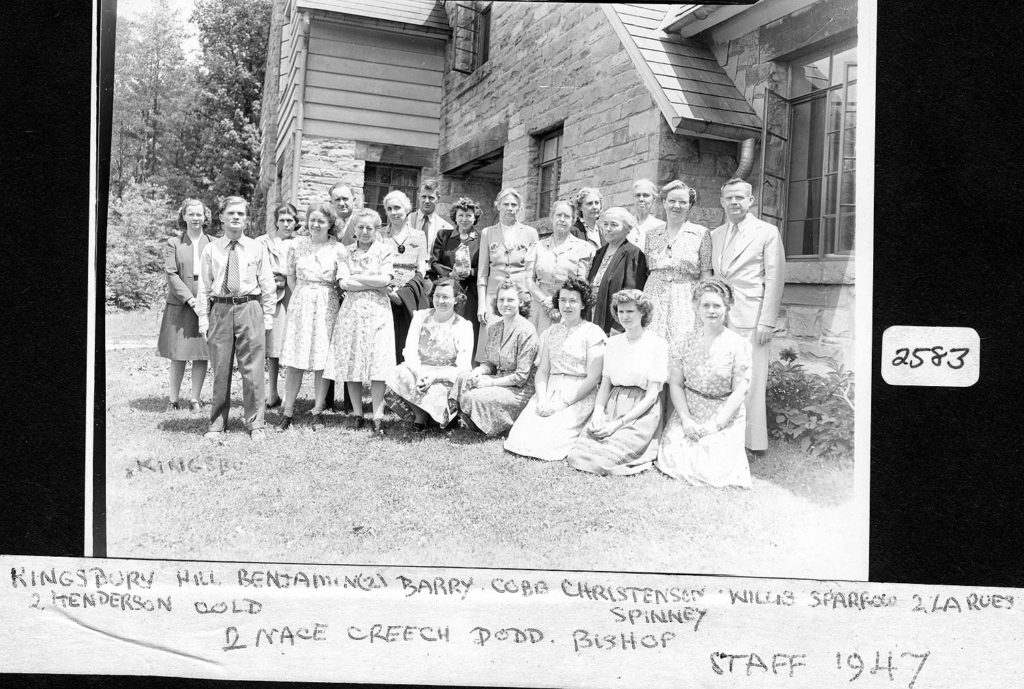 Minerva M. [Miller] Sparrow was born in 1882. She came to Pine Mountain in 1943 when she was sixty-one years old. She had already had a distinguished teaching career and a record of work with under-served populations. Just prior to coming to Pine Mountain she served as the head of the English department at Straight College (1920-1935) where she taught Latin and English. Straight College, a historically black college located in New Orleans, was established to work with freed slaves just following the Civil War.

Perhaps remembering one of her earliest teaching experiences in a small rural school in Massachusetts and her work with Straight College, she was excited to learn of Pine Mountain and the opportunities for service through her friend Miss Edna O. Spinney, a teacher at the settlement school and a close friend.

She writes in her application to Pine Mountain:

My interest in Pine Mountain is due wholly to the letters which my friend, Mis Spinney, has written me this year. The work seems most worthwhile and in line with my years of teaching in church schools in the South.

Miss Sparrow grew up in the New Bedford community of Massachusetts and attended New Bedford High School (1896-1900). She received an A.B. Degree from Mount Holyoke College in Massachusetts (1900-1904) and pursued additional graduate work at Radcliffe and Harvard and at Middlebury (Vermont) College where she received an M.A. in English in 1927.

In her application packet for a position of teacher and/or housemother at Pine Mountain, Miss Sparrow’s previous work at Straight College is evaluated in a letter of recommendation from Frances L. Yocom, who knew Miss Sparrow in New Orleans and was currently serving as the Associate Librarian at Fisk University, another historically black university in the South

My knowledge of her teaching comes from several years contact with her at Straight College in New Orleans. She took great interest in the whole student and tried to develop the good qualities which she found in each one. Though her students may have found her standards hard to attain, they ended by appreciating her and loving her. She comes from one of the old seafaring families of the Cape Cod region, whose characteristics of determination, forthright speech, and courageous optimism have appeared again in this one of their descendants. You will be doing your school a favor by adding her to your staff.

And, from the former Dean of Straight College, Ludwig Larsen, she received the following endorsement

Miss Sparrow was Professor of English at Straight College, New Orleans until that institution was merged with another to form Dillard University. During my thirteen years there as Dean, I came to know her work intimately. She taught the College, English and supervised the practice teaching in the School, I consider her the best teacher of English that I have known in forty years of experience. She is a woman of fine Christian character, very thorough and conscientious and at all time having in view the best good of her students. I cannot speak too highly of her …

Larsen also previously served as the Principal of LaMoyne Institute in Memphis, TN. where he was associated with the American Missionary Association. At the time of his writing, he had moved to another historically black university, Fisk University, where he was employed to teach.

**[Pine Mountain was fortunate to have several teachers who came from a background associated with Freedmen schools. The Quaker family of Pine Mountain teacher, Miss Abbie Winch Christensen founded Penland School on the coast of South Carolina at Beaufort. The school was established to educate the sons and daughters of freed slaves.] 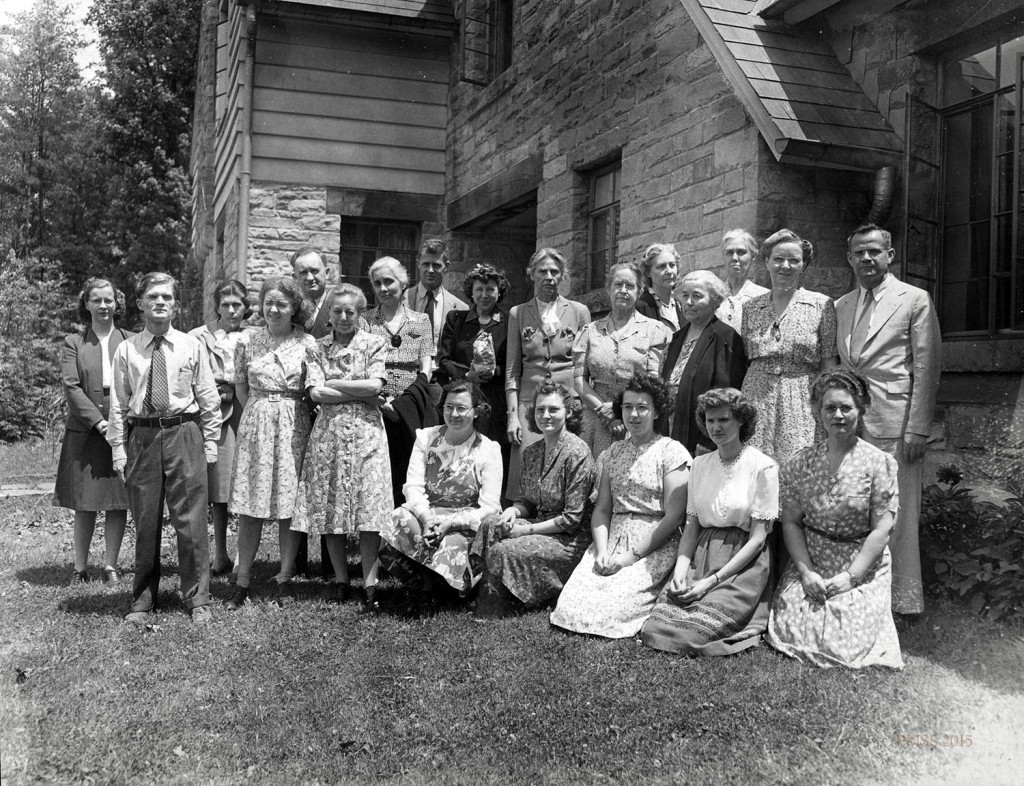 Miss Sparrow’s application was approved by Pine Mountain School’s Board of Trustees and she taught English at the School for the next three years, 1943-1946.

In 1947 she was invited to come back to Pine Mountain to teach and at first accepted, but that summer she had a turn in her health. She wrote to Mr. Benjamin that she did not believe she had enough stamina and declined to return. She was a woman of remarkable energy, but all were agreed that she had earned her rest. At Miss Sparrow’s suggestion, she was replaced by her friend, Miss Spinney who, according to Miss Sparrow, “is so desirous of teaching that I feel she can step into the shoes I have really not worn and carry on the work with great happiness and with her usual unequaled energy.”

However, Miss Sparrow’s work at Pine Mountain did not end there. A year later, she was finally lured back to teach English and work as an assistant housemother at West Wind dormitory. Letters in the PMSS Collections indicate her signing a teaching contract for the school year 1948-1949.

Minerva Sparrow wrote to PMSS Director Burton Rogers after her time at Pine Mountain, expressing a concern that was not uncommon from those who worked at Pine Mountain — that she regretted that she had so little to donate to the School except her talents. However, it was her talents that she gave in great quantity through her seemingly limitless store of labor and love. She has been described by many of the children who were fortunate to have her as an instructor at Pine Mountain, as one of the best teachers they had in their educational years.

Her desire to work with young people was still strong when in December 1951 she applied to another school to work as housemother. In spite of a reference from Burton Rogers, she was not accepted because “The school really wanted some one under fifty as a housemother, and my experience with young people didn’t outweigh the years.”

In the spring of 1951, Miss Sparrow visited Pine Mountain and later wrote the following to Burton Rogers:

I think of my brief visit this last spring with deep pleasure. It was a satisfaction to see with my own eyes that the change in the school, which was a little hard for some of us to accept, has been a change for the good. You reach more children, you can influence them more surely in the earlier, formative years, and you have far closer relationship with the families and remote communities that we had. All to the good.

The last letter on file for Miss Sparrow in the PMSS Collections was an acknowledgment in January 1959 by Burton Rogers of her gift to the School:

I really can not tell you how deeply moved and gratified that I am by this your latest contribution. It is hard to feel that we are worthy of such goodness and helpfulness or your part. I want you to know that we are conscious of our great indebtedness to you and your very helpful way of showing your interest as you still take part in our efforts here.

Minerva Sparrow died at age 85 (or 86?) in May of 1968 in Mattapoisett, Massachusetts. She was buried alongside her family members at Cushing Cemetery, Mattapoisett.