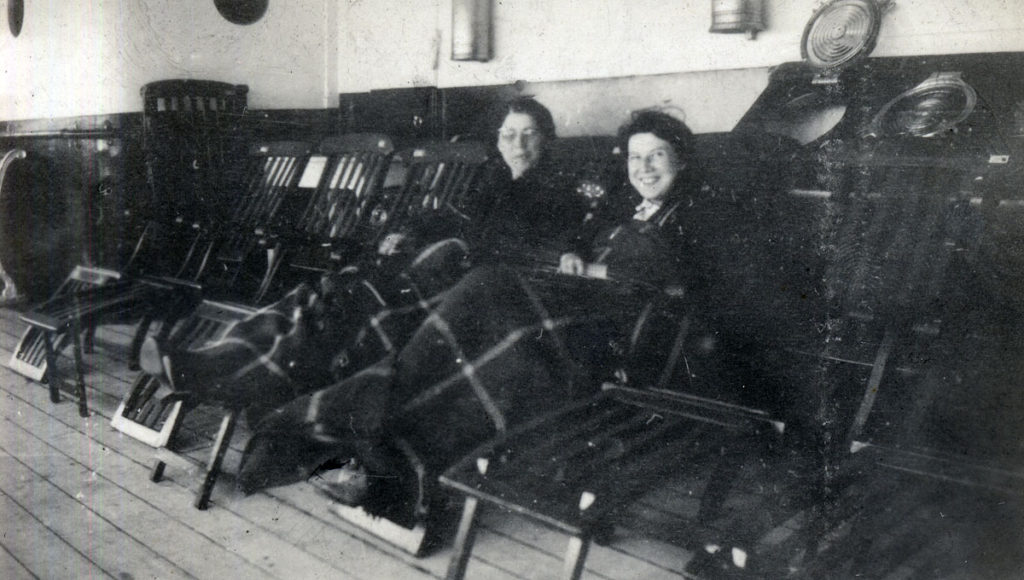 The first donation is from Mary Catherine Nelson, a publisher in Kingston Springs, Tennessee, who re-published Alice Cobb’s 1953 book War’s Unconquered Children Speak, detailing the effects of war on refugee children. See ALICE COBB for additional information about the book.

In addition to a copy of the newly published War’s Unconquered… Mary Catherine donated a copy of the original 1953 publication by Beacon Press. The original publication, which is very scarce, includes twelve pages of black and white photographs taken from a variety of sources that help to image the all too familiar tragedy of families torn from their homeland.

The materials in the second addenda include correspondence, business papers, publications, scrapbooks and other materials related to the life, work, and family of Alice Cobb. The donated material came to Pine Mountain from Celia Miles, wife of Louis Miles, a theologian, and former faculty at Warren Wilson College in Swannanoa, NC.. Both Celia and Louis were close friends of Alice Cobb and Louis Miles had, for many years, talked about publishing some of Alice Cobb’s works but the full publishing project was interrupted by his untimely death in April 2014.

Pine Mountain is deeply appreciative of the donation of this small but rich body of material associated with Alice Cobb and her thought and writings, many of which derive from her years at Pine Mountain Settlement School.

2014.  Two copies of Miracles at Portici: Stories of Casa Materna by Alice Cobb and edited by Celia H. Miles and Louis Miles with a forward by Ruth Pool Moore, 2014, are the newest addition to the published writings of Alice Cobb.

1952, Nov. 4. Letter from author Lillian Smith through her secretary Paula Snelling. Alice Cobb wrote to Lillian Smith asking if she would look at some chapters of her new book War’s Unconquered Children Speak . Lillian Smith through her secretary, replies that “Miss Smith will be glad to read the chapters you mentioned and to tell you her feelings about them.” She continues with remarks on Cobb’s treatment of bi-racial children and “discrimination” against people of color, particularly of “Negro.”   [Letter removed from SCRAPBOOK I and placed in folder, “Letters”]

1952, December 12. Letter from the secretary for author Lillian Smith (Pula Snelling) with long note from Lillian Smith in pencil at bottom of letter.  Alice Cobb had sent her a proof or a portion of War’s Unconquered Children Speak for her comment. Smith wrote:  “I liked it very much! I’m tremendously stirred by the anguish of those poor girls. It is important material.  had some comments to make, technical ones, about certain problems not of content but of craftsmanship. that is only I delayed: to be sure I said I might! But you write very [underlined twice] well. And I was deeply moved by it — its beauty [?] as well as its [ ? indecipherable].  [Letter removed from SCRAPBOOK I and placed in folder, “Letters”]

1950, “Sidelights on Puducah …”  It took a visit to Paducah for Miss Alice Cobb of 2 Petticoat Lane Frankfort, KY., …to learn that she was related to the late Irvin S. Cobb…It all went back to Henry Cobb of Irish birth, who boarded a ship at Norwich, England, and landed at the Jamestown settlement in 1631…”

n.d. Prospectus for the development of The Medical Settlement, Big Laurel, KY. Authored by Alice Cobb [?]

1958 “Meet Some Methodist Writers.”Authors who contribute to Methodist publications such as FORECAST.

1961, August 4. “Teacher Gets Rare View of Orient.”South Coast News [California]  Describes Cobb’s work with rehabilitation and refugee camps in the “Orient.” Describes trip to California to stay with Donald and Frances Vanderbilt. Donald was a childhood friend.

1968d, Apri-June. Nashville Municipal And it…? [2 pages] “Women of the Year for 1967.” Scarritt College recognition of Dr. Cobb. Newspaper article opposite. [No source is given.]

1975, December 28. “A Mind-Blowing Visit to China,” by Tom Rogers.  “It’s mind-blowing,’ Alice Cobb says of her tour of Mao Tse-tung’s People’s Republic of China.” She and 21 other Americans traveled on a 21-day visit “behind the increasingly translucent Bamboo Curtain.”

1989, August 5, 1989.  “E-Scarritt Professor Gets Distinguished Alumni Award.”  A newspaper clipping included in the donation from the Tennessean newspaper, August 5, 1989, describes Cobb’s Distinguished Alumni Award” “from the Boston University School of Theology and her other lifetime achievements. She was director of Scarritt’s church and community programs from 1952-74 and director of the Highlander Folk School at Monteagle’s Public Relations from 1959-61.Patterson, Staff Writer. Cobb awarded a Boston University School of Theology Award.

1952, June 1. Courier-Journal.  “No Place to Go: A Kentuckian visiting the Arab refugees finds ad air of hopelessness and hatred.” By Alice Cobb. Working for the Kentucky Divisio of Child Welfare speaks frankly about conditions following WWII. Editor’s note says, “Miss Cobb presents in this article, which was compiled from a series she sent in and edited here was gathered from pro-Arab sources and may be an incomplete picture.” The article captures the deep distress of the refugees. “It’s a very simple question,” I was assured [says Cobb],…”The issue is clear. Once we had our homes. They belonged to us, and our fathers before us. They were ours for 13 centuries.  We were driven out and lost our homes, our money, many of our lives. We do not ask for money now. We ask for just one thing. Let us go back to our homes. It’s simple.”

1952 [?]  The Mainichi Newspapers. “How Many Miles to Bethlem?,” By Alice Cobb (All copyrights Fully Retained By the Writer; Exclusive in Japan to the Mainichi) An excerpt from Cobb’s forthcoming book on the Near East, entitled “The Uprooted,” scheduled for publication by Beacon Press.  Cobb later changed the title[?] to “War’s Unconquered Children Speak.” [Source of newspaper publication is unknown.

1953, December 6. Courier-Journal.  “The Innocent Victims It is children affected by the war and its aftermath who make up the most poignant commentary on our times.” Bu Dorcas Ruthenburg, Director, Public Affairs Programming, WHAS.  Describes the work of Alice Cobb as consultant and representative of the Division of Child Welfare, Frankfort, KY.Describes Cobb’s War’s Unconquered Children Speak, Beacon Press, 1953. Cobb describes the hatred of the Arab elders passed along to their children for all people they hold responsible for their homelessness … they “dislike the Communists only slightly less than the British and Americans, she found.”  And, “In Greece, she found intense hardihood ad gay courage that bubbled up around poverty and ruins.” [Article contains photographs.]

1953.  Beacon Press release. Beacon Flashes from the Beacon Press, 25 Beacon Street. Boston 8, MA.  War’s Unconquered Children Speak. “How can a teenager get any real understanding of the tragic effects of a war he never knew — what it has done to people just like himself, only not so lucky; what it continues to do to families like his own, long after the shooting has stopped: And yet it is the after-effects of war which lay the basis for new wars. Some understanding of these things is vital if we are not to repeat the mistakes of the past …”

1953, Saturday, May 23. Christian Science Monitor “Cooperation in the Greek Hills — School Fiance — Homemaking Added: Girl’s School Near Athens Adopts War-Torn Greek Village, Secures Aid, Helps Rebuild.” By Alice Cobb, Special to the Christian Science Monitor.   “Industries? The [Greek] Ministry of Agriculture is ringing bee swarms if the village can provide hives….ten looms have been contributed which can be used by the whole village to become a nucleus for a small weaving industry…”  Sound familiar?

1954  [Source unknown] War’s Unconquered Children Speak review by Helen Deihl Olds. “…She devotes one chapter to Mrs.  Kathy Prugel who is the one-woman Haven of Hope for the half-and-half children, the brown babies of German women and Negro soldiers.

1954, June.  The Ledger.  Juvenile Books by Helen Diehl Olds, who reviews War’s Unconquered Children Speak, as a Juvenile book. “The writing in the 28 chapters is varied with the author used the letter form in some chapters, in others she shifts to present tense with startling vividness.”

1955, February.  Childhood Education. “Books for Adults … Editors, Dept of Education NISTC, DeKalb, Ill.  “There is shocking realism in Miss Cobb’s reporting yet combined with this is a sympathy and warmth of feeling for people that is evident on every page.” Reviews War’s Unconquered Children Speak, as an adult book.