This Atlantic Monthly article brought many in Appalachia to question the author, Irene Hudson’s intent and raised one of the first long debates about “stereotyping”  Appalachian people.

The response from Pine Mountain Settlement School by Evelyn Wells to Ellery Sedgwick, Editor of The Atlantic Monthly, was quick and sharp: 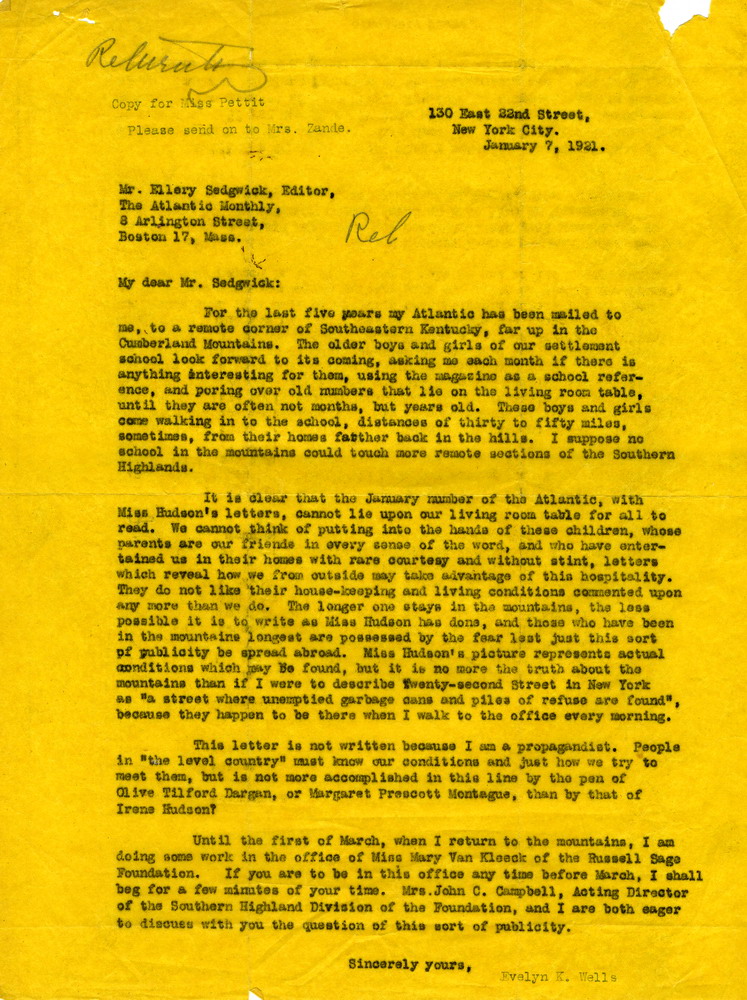 [Note at top] Copy for Miss Pettit
Please send on to Mrs. Zande

For the last five years, my Atlantic has been mailed to me, to a remote corner of Southeastern Kentucky, far up in the Cumberland Mountains. The older boys and girls of our settlement school look forward to its coming asking us each month if there is anything interesting for them, using the magazine as a school reference and pouring over old numbers that lie on the living room table until they are often not months, but years old. These boys and girls come walking in to the school, distances of thirty to fifty miles, sometimes, from their home farther back in the hills. I suppose no school in the mountains could touch more remote sections of the Southern Highlands.

It is clear that the January number of the Atlantic, with Miss Hudson’s letters, cannot lie upon our living room table for all to read. We cannot think of putting into the hands of these children whose parents are our friends in every sense of the word and who have entertained us in their homes with rare courtesy and without stint, letters which reveal how we from outside may take advantage of this hospitality. They do not like their house-keeping and living conditions commented upon any more than we do. the longer one stays in the mountains, the less possible it is to write as Miss Hudson has one and those who have been in the mountain longest are possessed by the fear lest just this sort of publicity be spread abroad. Miss Hudson’s picture represents actual conditions which may be found, but it is no more the truth about the mountains than if I were to describe Twenty-second Street in New York as “a street where unemptied garbage cans and piles of refuse are found” because they happen to be there when I walk to the office every morning.

This letter is not written because I am a propagandist. People in “the level country” must kow our conditions and just how we try to meet them, but is ot more accomplished in this line by the pe of Olive Tilford Dargan, or Margret Prescott ontague, than by that of Irene Hudson?

Until the first of March, when I return to the mountains, I am doing some work in the office of Miss Mary Van Kleeck of the Russell Sage Foundation. If you are to be in this office any time before March, I shall beg for a few minutes of your time. Mrs. John C. Campbell, Acting Director of the Southern Highland Division of the foundation, and I are both eager to discuss with you the question of this sort of publicity.