The Nolan Family is one of the oldest families in eastern Kentucky. Their annual reunion is generally held at Pine Mountain Settlement School. Among the most prominent members of the family was Elhannon Murphy Nolan (1862-1941), well-known in Harlan County as teacher, postmaster and merchant. 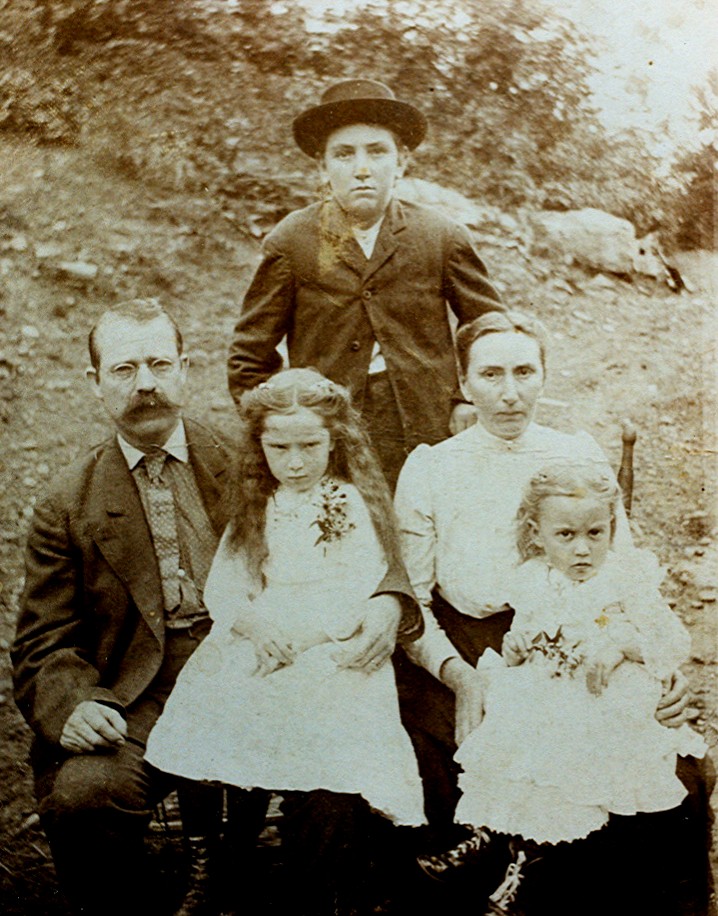 “In our family oral history, he went by his initials of E.M.,” according to Cora L. Richardson, the great-great-granddaughter of Elhannon Murphy Nolan. “But I am very sure that different folks that knew him would probably speak of him with a different name, e.g.: Elhanon, Elhanon Murphy or El….” among other variations of his name. The name “Elhannon” appears on his death certificate [see Gallery] and is the form that is used in this story.

(While researching the Nolan Family, the surname Nolan was also found to be spelled in various ways, such as Nolen and Nolin. At times, it could not be determined whether these surnames belonged to unrelated families or are misspellings of the same family name. In those cases, the information was not used for this biography.)

…[W]hen [Elhannon] and Granny were first married, they didn’t have a place to live so he cleaned out the chicken coop that was E.M.’s and he said it was attached to the store and this is where they lived when they were first married. From looking at the photos [below] and from what he said, I believe the little room to the left is the old chicken coop where they lived. 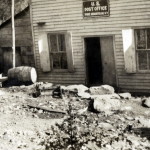 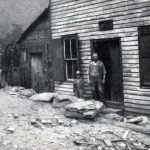 Elhannon’s marriage certificate indicates that Elhannon was following in his father’s footsteps as a farmer. But Elhannon must have had different aspirations and skills as he eventually became a teacher,  merchant and postmaster. Cora Richardson remembers her “Granny” Allene describing her father, Elhannon, as:

…educated as a young man in Barbourville at the school which later became Union College. He was a teacher for a number of years in the school system of Harlan County. He held membership in the Christian church for more than forty years and was a member of Nolan Lodge of Free Masons [since 1908].

According to Cora Richardson, the Nolans first lived at Pine Mountain, Kentucky, located in Harlan County. Around 1907 they moved to land they owned on Cutshin Creek at Dry Hill in Leslie County. They lived there until just after 1912. They returned to Pine Mountain at the time Katherine Pettit started meeting with William Creech about the school being built at Pine Mountain.

The PMSS Collections contain Elhannon’s 1912 letters (#005 and #020) to Katherine Pettit and Rev. Lewis Lyttle. Sent from Dry Hill, Kentucky, his letters provided advice concerning the purchase of 100 acres of land from John D. Shell (Elhannon’s father-in-law) on which to build the future Pine Mountain Settlement School.

According to student files in the PMSS Collections and the 1920 U.S. Census, Allene Nolan, Elhannon’s daughter, had attended Pine Mountain Settlement School in the 1920s. Allene worked as a housemaid for Mrs. Ethel de Long Zande while attending the School. Her husband, Dillard Metcalf, a railroad policeman, also attended PMSS. He helped build the rail tracks for Intermountain Coal & Lumber Company that crossed the School’s property. Cora Richardson wrote:

I can remember that my “Granny” [Allene] always spoke about PMSS with enthusiasm and thankfulness for all it taught her and for the opportunities that it provided for the families there at Pine Mountain. 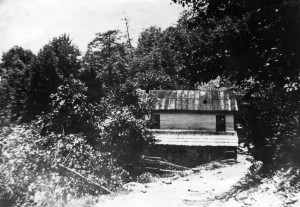 According to a story recorded by Alice Cobb, the upstairs of E.M. Nolan’s house was the original home of Pine Mountain School. Evelyn K. Wells describes the early days of the School:

We did not wait for a schoolhouse to begin teaching; the House in the Woods took care of the children till snowfall until 1918, when they were distributed in the living room of various cottages; or the first three years at the Masonic Lodge over Mr. Nolan’s store.

The Nolan Lodge of Free Masons, No. 806, to which E.M. Nolan belonged, was purportedly one of the oldest lodges in Kentucky. Located close to Pine Mountain School, many members had ties with the School. 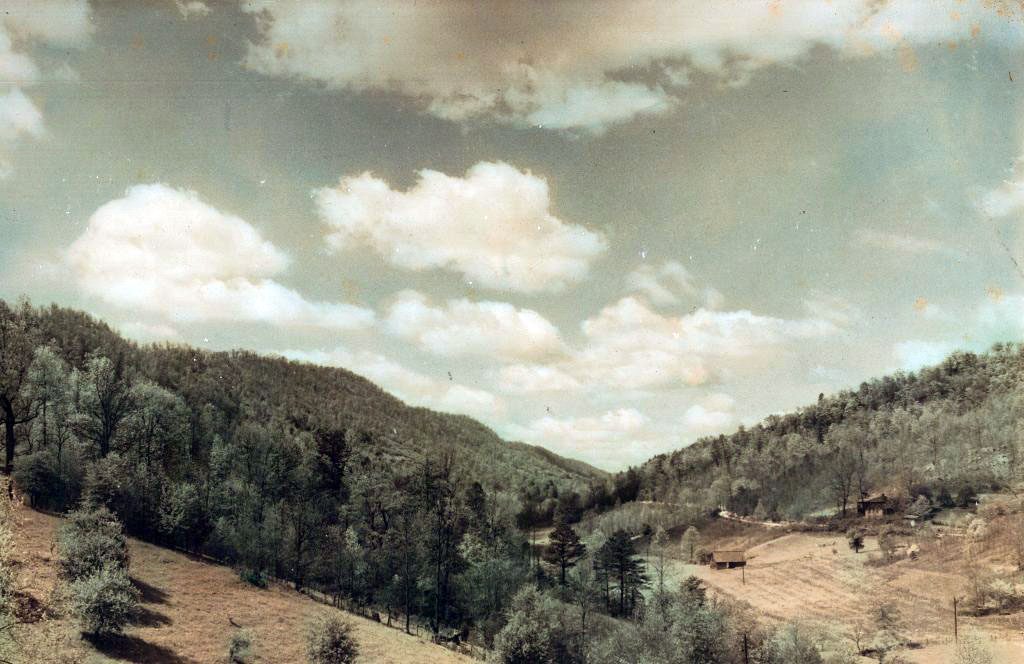 When Cora Richardson and her mother visited Pine Mountain Settlement School in 2017, she was shown a photo of the Nolan Farmhouse by the School’s office manager, Jeannie Crain:

In the photo [above] on the left-hand side is the Nolan Farmhouse. One of the stories my Granny said she remembered was that her family always would have people that would board at their home with them. One of the boarders they had was an older man that would sit on the porch and smoke his pipe. She said that the porch was up off the ground and there was room under this porch for them to have storage and they would store clothes and other items there. When their house caught on fire and burned down they believed that man had been sitting on the porch and changed the tobacco in his pipe and let the ashes fall down through the cracks in the porch and land on those clothes which then caught the house on fire and it burned down. Back to the house in the photo, we are not sure if this is the house before or after the house fire but it is nice finding this and to know that it is one of the homes they lived in.

Delbert B. Nolan (Married Bodie Anderson and had 3 children.)

Sadly, the lives of two of Elhannon’s children were cut short: Henry M. Nolan, his oldest child, died at the age of 15 or 16. He was recorded in the 1900 U.S. Census as a “farm laborer.” Blanch Nolan was born October 25, 1902, and died at the age of 18 on August 17, 1921, at Pine Mountain, Harlan Co., KY, of “acute dilatation of the heart” contributed by “mitral insufficiency.” The doctor who had been attending her was Grace Huse, M.D., of the Pine Mountain Settlement School. (See Gallery below.)

Cora Richardson, Blanch’s grandniece, wrote in Blanch’s memorial on www.findagrave.com, “She was so fair of skin, almost snow white and with the reddest, prettiest hair.” Both Henry and Blanch were buried in the Nolan Graveyard (also known as the Shell Cemetery). 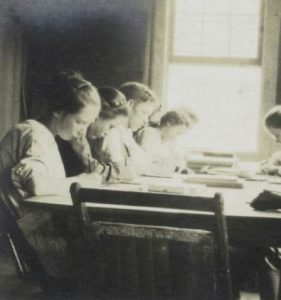 The names of several of Elhannon’s family members also appear in documents in the PMSS Collections:

John D. Shell, Elhannon’s father-in-law, who lived during the Civil War, was featured in the story of Rebel Rock, as told by Elhannon and recorded by Ethel S. Norton, a PMSS teacher in 1927.

Kenneth Nolan of Pine Mountain, KY, is listed as one of three members of the Local Advisory Board in the 1915 BROCHURE: “THE PINE MOUNTAIN SETTLEMENT SCHOOL IN THE MAKING.”

Otto Nolan’s residence, “where Cora Scearce was staying,” was “a short walk” from the one-room district school. ALICE COBB STORIES “Visit to the Harmon Turners, 1934.”

Elhanon M. Nolan, 79-year-old former merchant and rural post-master, and great-grandson of John Nolan, Revolutionary War soldier who was with General Washington at Valley Forge, died at his home at Loyal at 4 p. m. Friday after an illness of two years.

Mr. Nolan lived until four years ago at Pine Mountain. He was educated as a young man in Barbourville at the school which later became Union College. He was a teacher for a number of years in the school system of Harlan County. He held membership in the Christian church for more than forty years and was a member of Nolan Lodge of Free Masons.

He was the son of Samuel and Polly Nolan. He was married 56 years ago to Miss Jane Shell, the daughter of John Shell, who is still living at the age of 95.

Mr. Nolan was one of the country’s oldest pioneer citizens. He was widely known in the county.

The family of Mr. Nolan came to this section of Kentucky from Virginia with a land grant given to John Nolan after the Revolutionary War, and which included the site of the city of Middlesboro.

Funeral services will be conducted from the Church of Christ, Loyall, today at 1 p. m., the Reverend Platt officiating. Burial will be made in the family cemetery at Pine Mountain. [Source: Harlan Enterprise, c. February 9, 1941; copy of clipping courtesy of Cora Richardson. See image in Gallery.]

Return To: GUIDE TO FAMILIES IN THE PINE MOUNTAIN VALLEY COMMUNITY 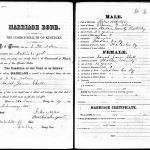 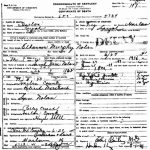 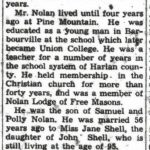 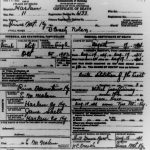 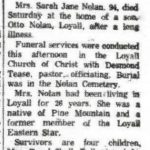