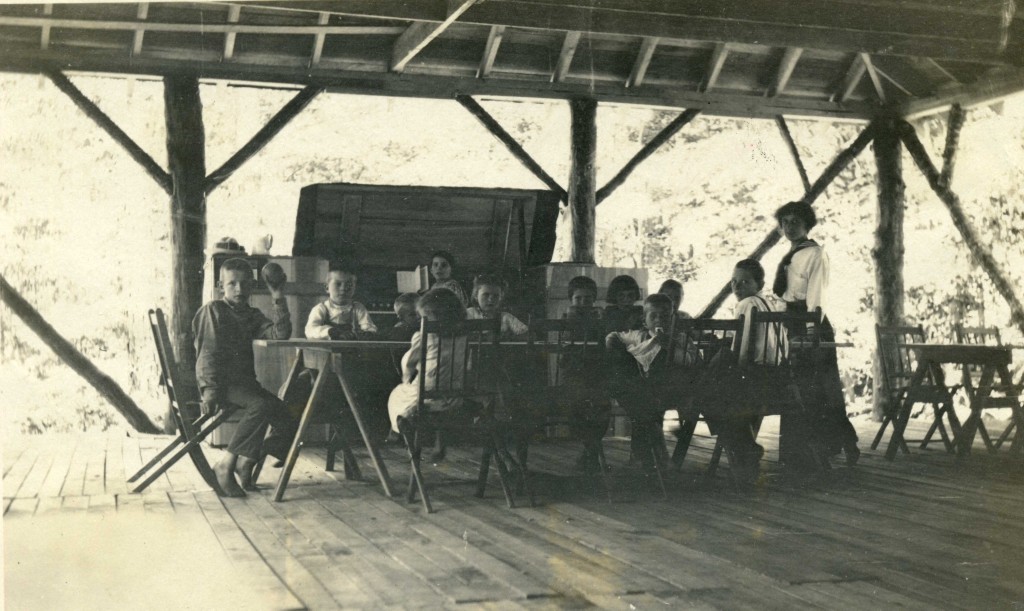 We have always been primarily a school. It is book-learning our children have come for and book-learning that has explained Pine Mountain to the countryside. The life of the school adjusted itself around lessons even in days when the most important thing in the world seemed to be to get the food cooked, the clothes washed, fires built, corn hoed, buildings built. We did not wait for a schoolhouse to begin teaching; the House in the Woods took care of the children till snowfall, until 1918, when they were distributed in the living room of various cottages; or the first three years at the Masonic Lodge over Mr. Nolan’s store. The day after the new Mary Sinclair Burkham Schoolhouse I burned to the ground, classes were resumed in any odd corner of the grounds that was available. Study hour from the very beginning was impressed upon us as a sacred thing, and insistence continued in the face of difficulties until now every house studies peacefully and comfortably every evening. 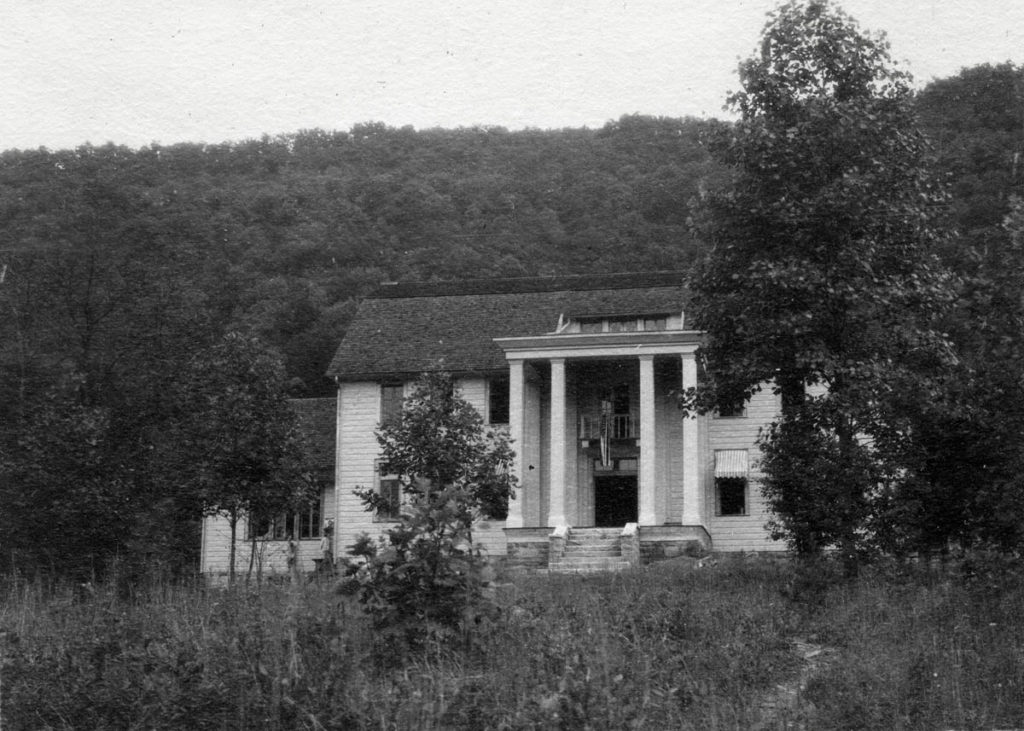 A group of kindergarten children was taught the first summer 1913, and the following winter a volunteer teacher had an irregular group with little children in the morning, older ones in the afternoon, and one big boy every evening.  The second winter there were three salaried teachers, and from then on the academic faculty grew slowly, until in 1928 there were six, not including the teachers of vocational subjects. The accompanying table shows the number of children handled each year in the school and the graduates from grades and high school.  High School was begun in the fall of 1920, with five students in the first year. 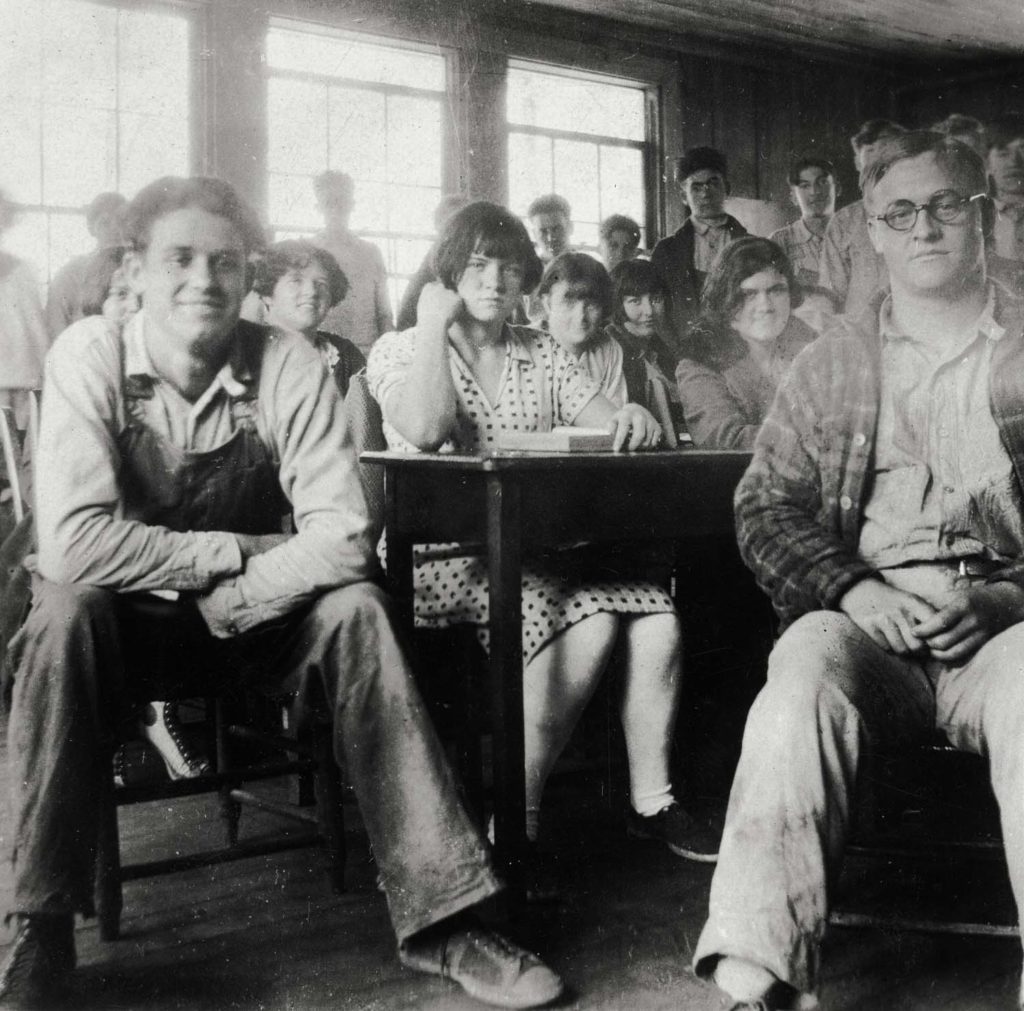 In May 1924 a drastic change was made in the policy and courses of study, in the exclusion of children not ready for the fifth grade, and younger than fourteen years of age. This was done because of a growing conviction on the part of the Executive Committee that Pine Mountain would be a better school entity with a more uniform group of children; that we could not give the younger children the hoe influences they were particularly in need of and that since we could not tell for some time whether a younger child had the mentality and character deserving of a place at Pine Mountain, we were not justified in spending the money contributed by friends who assumed that we were doing all we could with it in the training of a child during its trial years.  But perhaps the most important reason for making this change was the improvement in the district schools all around us. When Pine Mountain began, the children who came to us from the district schools knew really less than nothing since they had been so badly started that they had to unlearn the little they knew; in 1924, children could get good teaching through the fourth grade in most of the district schools from which we drew; why should we be doing the work the state was at last able to do? 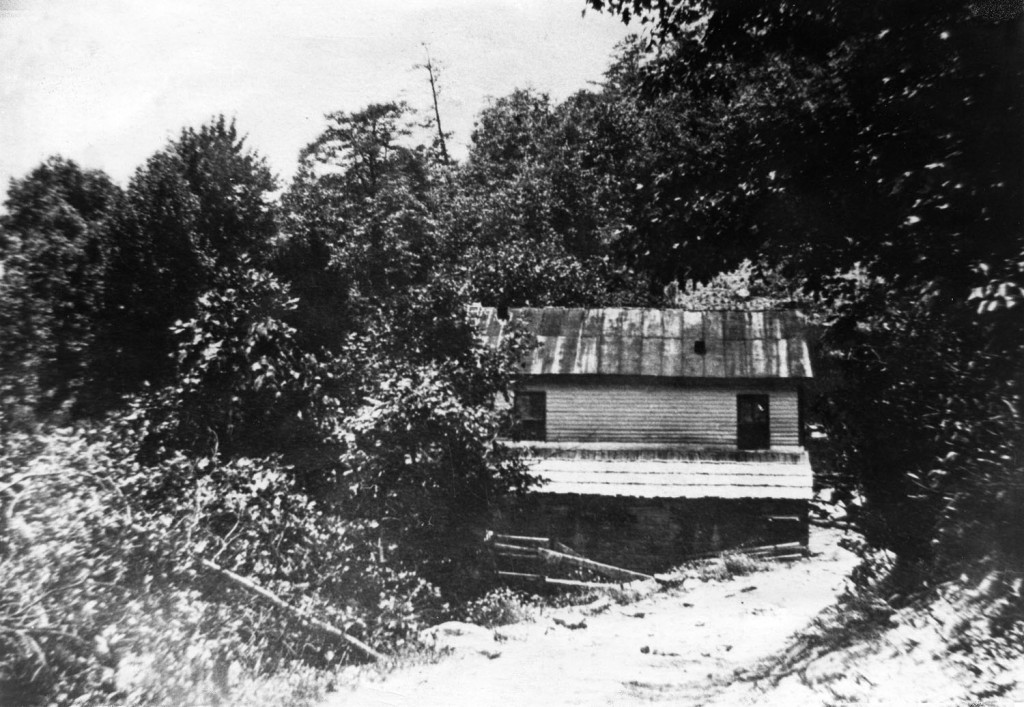 When the change was made, we kept on any children to whom we were already committed, such as younger brothers and sisters who had started with us, but in a couple of years, all such hang-overs were legitimate members of the school family. A little day school was conducted for a part of each year, for small children in the neighborhood, taught whenever possible by a volunteer worker. [Beginning of “Little School.”]

The booklet has been Pine Mountain’s only attempt to standardize. Its ideal has been to open the way for the children to offer them intellectual food that was real mountain fare to fit them for life in a locality that was rapidly changing rather than to fit them into a school system by conforming to what other schools were doing. Much of our work has been of an individual, emergency nature, and you will often find among our graduates young people who do not fall in line with eighth graders and high school students from other schools. With the improvement of schools all through the south, there has been a growing tendency towards standardization, which we have tried to avoid because we felt its deadening effects. Pine Mountain, at the sacrifice of not being accredited, has stayed free.

It has been hard to teach a school so far away from the source of supply of good progressive teachers, and we have suffered from the comings and goings of good teachers who could not afford to work at Pine Mountain, or could not manage the conditions We have lost many who put in a couple of years of solid work with our children, and really took hold of their minds. We have sought the progressively minded and trained, but we have valued the work of experienced teachers who knew how to drill the children in the old ways.

The first use of Antioch [Exchange] students by shifts was in 1925, and since then we have had one and sometimes two pairs of them working cooperatively, most of them particularly successful and a distinct addition to our staff, bringing us in contact with that remarkably interesting college and its new ideas, and contributing to our own morale.

Pine Mountain has run the gamut of intelligence tests, like the rest of the world, but until very recently there have been none really suited to our children with their different experience and vocabulary. The best information on the subject seems to have proved that the Pine Mountain child, while far from lacking in mentality, is not intellectual, making a better craftsman than student; and that our best service must be available for the young person whose mind is the adjunct of his hands and not for development per se.  Our young people go on to more advanced schools, but few of them go to college. Nursing, farming marriage work in shops claim most of them. Even the teachers are not the “born” variety and soon marry.

The figures for “turn-over” include all students leaving during or at the end of any year for any reason whatever.

Full figures for the year 1924 were not available.

Total number of students who have passed through the school 666+ those in 1924.

1924 Graduates, Kitty Ritchie, who has since completed her college course at Berea. Elva Lewis, who married during her high school course and completed it after marriage.

1926 Graduates, Elsie Creech, now in college at Berea.  Becky May Huff, who specialized in weaving first at Berea and is now teaching weaving at Olive Hill.